Kelly Dodd Says Vicki Gunvalson “Screwed Up” and Has “Diarrhea of the Mouth”, Plus Slams Diko Sulahian! 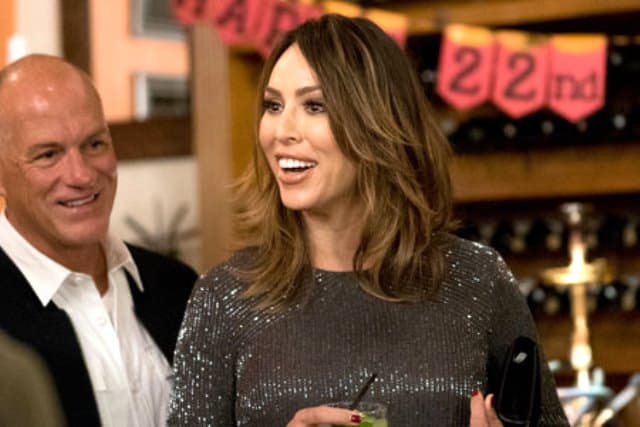 Well this is shocking! In her latest blog, Real Housewives of Orange County star Kelly Dodd has some harsh criticism for her BFF Vicki Gunvalson following the latest episode of the series.

Viewers of the RHOC saw Vicki have a sit down with former friend Tamra Judge on Monday night’s episode as she claimed she wanted to resolve their issues and reconcile. Things whoever took a turn for the worse when Vicki accused Tamra of also hurting her and then implied that Tamra’s husband Eddie Judge might only be with her for money and other perks.

In her Bravo blog, Kelly feels that Vicky “screwed up” when it came to the meeting with Tamra, adding that “she had a bad case of diarrhea of the mouth”.  Below are excerpts –

“Yay! Vicki and Tamra finally got together to have “the talk” to try to rekindle their friendship!

Damn, what the hell just happened? Vicki screwed up, that’s what happened. Apparently, the colonic didn’t remove all the toxins, because when Vicki sat down with Tamra, she had a bad case of diarrhea of the mouth. It pains me to say this, as Vicki is my very dear friend, but I cannot understand how she screwed up so badly with Tamra. For some reason, despite her best intentions, Vicki let her anger over past transgressions cloud her judgment. You know Vicki blew it when Tamra comes across as the calm, rational person who righteously walks away with her dignity intact. Vicki is left trying to rationalize the debacle and somehow try to save face. In this round of Vicki and Tamra’s ongoing feud, Tamra delivered a TKO.

Considering the friction in Tamra and Vicki’s relationship, any time they are in the same room together, it’s awkward. Now that I am friendly with all the ladies, it was inevitable that choosing which table to sit at for dinner was going to be a challenge. Fortunately, I was in the bathroom when everyone started to sit, so Michael grabbed the first available seats, which happened to be with Shannon, Tamra and Meghan. Vicki saying there was a power struggle on where I should sit was just paranoia on her part.”

Kelly also took issue with Peggy Sulahian‘s husband Diko Sulahian’s decision to “confront” Shannon Beador at his anniversary party over his issues with David Beador. She accuses Diko of Auditioning to be the 8th housewife. Ouch! I must say it didn’t feel like a confrontation but rather a genuine attempt by Diko to clear the air with Shannon. Excerpts are below –

“Speaking of prerequisites, Diko apparently never received the syllabus on what to do (and what not do) when your wife becomes a Real Housewife. Rule #1: Husbands should not confront a Housewife who is not your ‘Wife. It’s never going to go well for you. However, having said that, it seems Diko wants to be the eighth housewife, so maybe the rules don’t apply to him.

Breaking rule #1, Diko chose to take Shannon aside and discuss what he perceived as David’s interrogation of him on the boat (regarding Peggy’s cancer). Diko blindsided Shannon with the topic, but I thought Shannon handled the situation well. Shannon exuded class as she spoke to Peggy about what Diko had said then walked away keeping her composure.

Finally, in the car for the ride home, Shannon updated Tamra on her conversation with Diko and Peggy and got upset. Shannon said, “If you have a problem with my husband then talk to him,” which (per the flashback) is almost verbatim what Vicki had told Shannon about Brooks. I love the irony.”

When it comes to her castmate Lydia McLaughlin, Kelly took issue with what she felt was hypocritical behavior!

“I am pretty sure Lydia has never been to a strip club. Confusing a belly dancer in a family restaurant with a stripper shows how insulated Lydia’s life is. Let’s see: Lydia is uncomfortable with drag queens, cross-dressing, discussing her boob job in front of men, and belly dancing, but totally comfortable telling everyone about Doug’s beautiful balls. Huh??”

She also acknowledges she is going through a difficult time at the moment weeks after announcing her plans to divorce her husband Michael Dodd.

“It’s a difficult, emotional time right now for my family. We appreciate everyone who has reached out to express support and best wishes to us. I enjoy having my dad around, but watching my mom and dad argue brings back a lot of painful memories. I love them both, and I just wish they could be friends, forgive and forget, and try harder to get along. I wish the same for Tamra and Vicki’s relationship.”

TELL US – DO YOU AGREE THAT VICKI SCREWED UP WITH TAMRA? WAS DIKO WRONG TO TALK TO SHANNON?