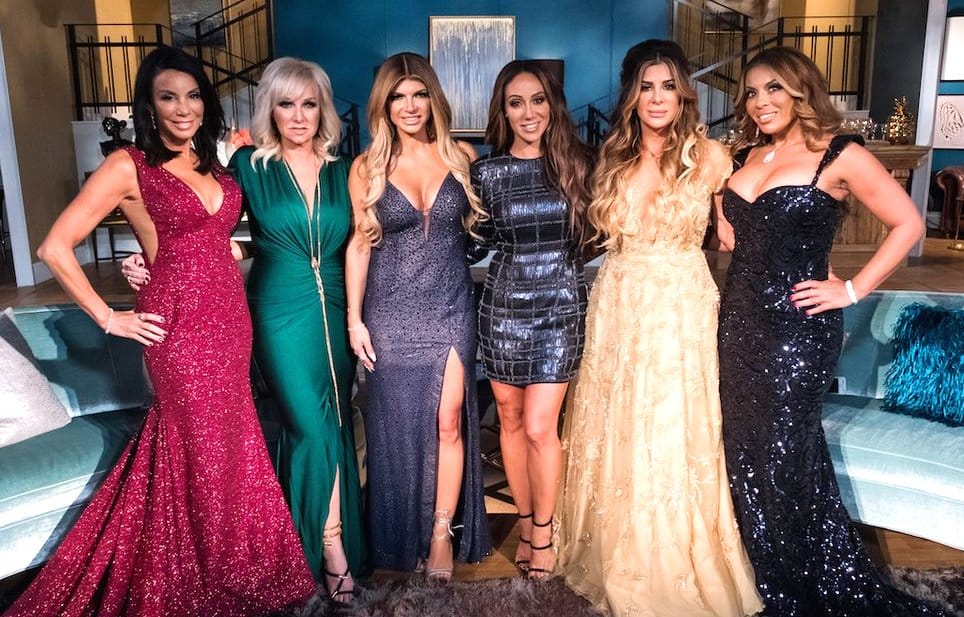 So, last night the ladies of the Real Housewives of New Jersey got together for the first installment of the season 8 reunion. And all I can say is…WOW!

Well, actually there’s a lot more to say. The point of the reunion shows, of course, is for the ladies to rehash the issues they had throughout the season, and these ladies had no shortage of issues. Particularly Siggy. That woman had issues with everything and everyone. To the surprise of absolutely no one, most of part one of the reunion was about her.

Anyone who thought there was a chance that Siggy and Margaret might have mended fences at some point between their screaming match at Margaret’s party and the reunion were certainly disappointed. Siggy isn’t mending anything with Margaret any time soon!

Any time Margaret said anything, Siggy rolled her eyes, or loudly whispered asides to Dolores, who sat, ever faithfully, to her left.

Siggy brought Margaret into the group (I’m sure you’re aware of this fact, since Siggy brought it up CONSTANTLY), and apparently to Siggy, that meant that she should have had total ownership of Margaret, and dominion over her friendships with the other ladies.

Right off the bat, this went wrong for Siggy because Margaret made fast friends with Teresa and Melissa when Siggy introduced them all in Boca.

Now, as viewers also know by now, (because she brought it up CONSTANTLY) Siggy believes that she owns the entire town of Boca, as well. And while her people were on her turf, they needed to play by her rules. They didn’t.

At Melissa’s birthday dinner, Melissa and Teresa got into a cake fight. It was all in fun. But Siggy had ordered the cake, and designed the cake, and paid for the cake, so it needed to be used as she saw fit.

She went off about how rude it was to throw the cake, and called Teresa and Melissa “trash”, and said she obviously had the highest IQ, of all the ladies. Well, she’s STILL  hurt and angry about that night.

When they discussed it last night, Siggy said that Margaret shouldn’t have defended Teresa and Melissa, because, again, Siggy “brought Margaret in”, which means Margaret had to agree with her. She didn’t.

Margaret explained that she hadn’t been defending Teresa and Melissa, so much as trying to defuse the situation, and stop Siggy from further making a fool of herself because she had taken the whole thing too far. But Siggy always has an excuse for herself. According to her, her overreaction was due to a few too many drinks.

The other ladies pretty much dismissed this justification as more of what they’ve come to expect from Siggy, who, as Melissa pointed out, has not been nearly as easy going this season as last. The ladies were also quick to point out that the cake, as beautiful as it was, was mostly plastic anyway. This hurt Siggy’s feelings, (what doesn’t?), but it was hilarious!

The ladies then reminded Siggy that she wasn’t exactly a bastion of class and perfect behavior that night, herself, even before the cake. She started crying, and poured out her wine, nearly spilling it on Dolores. Surely, that wasn’t  okay, right? Well, it was for Siggy. Because, again, she’d had a lot to drink, and was “among friends”, so getting carried away was not so bad.

Well, Melissa wasn’t going to let her get away with THAT weak excuse! Weren’t she and Teresa drunk, and “among friends” during their little cake fight, Melissa wanted to know? Check and mate, Melissa! But again, it was someone else’s fault. Siggy  said she poured out her wine because Margaret had said something derogatory about her husband, Michael.

Except Margaret didn’t do any such thing. All she did was ask Siggy if her husband was controlling…while Siggy  was complaining about him being controlling.

Following “cake-gate”, the ladies had argued, and Siggy had cried. This led Margaret to give her the hilariously appropriate nickname, Soggy. Much was made of this last night, as well. Siggy thought the nickname was cruel, and although Margaret apologized profusely, she “couldn’t get passed it”. Are you recognizing a theme?

Siggy claimed that by calling her Soggy, Margaret was also making fun of her “condition”. Siggy had a hysterectomy, and often blames her frying on her lack of a uterus. Margaret explained that it had nothing to do with her condition, and that she’d only mentioned it because Siggy had, and that she felt Siggy was “victimizing” women who’d had hysterectomies.

Margaret mentioned that Siggy’s trashed her, as well. She and Dolores had a slumber party one night, where they put their hair in pigtails, and imitated Dolores. Sure that wasn’t okay, right? It was for Siggy. According to her, mocking Margaret was just “fighting back”. And when Margaret mentioned the fact that Siggy had said she wanted to “destroy” her, Siggy said she still does.

Siggy also went after Margaret on social media, tweeting a picture to PETA of the stuffed bear in Margaret’s foyer. And why would she do that? Because Margaret made fun of all the pictures Siggy has of herself in the foyer of her home in Boca. Yes, even their foyers were a source of drama!

Siggy had a justification for everything. Including her public shaming of Melissa. Just because Margaret is Siggy’s favorite target, doesn’t mean that she’s her only target.

Shortly after they returned home from Boca, Siggy had a party at her home, and asked a large group of her friends (strangers to Melissa) if they agreed that it had been rude to throw the birthday cake. Melissa was mortified, of course. Teresa wasn’t there, and Melissa had to endure the humiliation on her own. When asked about it, Siggy simply said she was “trying to prove a point”.

Margaret tried to defend Melissa, and say that if  someone had done that to Siggy, she would have completely fallen apart (she’s right). But Siggy said she would only be offended if Margaret had done it.

Margaret said this was nonsense, and Siggy went at her once again, saying she was always inserting herself where she didn’t belong, and called her “thirsty”, and in the best line of the night, (if not the entire season) Margaret responded by saying Siggy was better suited for “The Real housewive of Bellevue”. Because, you know…she’s crazy!

Another bone of contention among the ladies is Siggy and Dolores’ continued friendship with Kim D., who has been a thorn in the sides of Teresa, Melissa, and Danielle for years.

She set Melissa up to look like a stripper, backstabbed Danielle, and talked  about Teresa’s husband Joe’s alleged infidelity. All of these things took place at Kim D.’s fashion shows throughout the years, and Melissa, Danielle, and Teresa were incensed when they found out Siggy and Dolores would not only be attending the show, but walking in it this year. To make matters far, far worse, this year Kim D. was also spreading rumors about Teresa being unfaithful to Joe.

Dolores and Siggy insisted that they’d known Kim D. for years, and that she’d never done anything to them, and besides, the fashion show was for charity.

This wasn’t good enough for Teresa, Melissa, and Danielle, and they still didn’t understand how they could call this woman a friend.

Perhaps they’ll get their answer next week. Kim D. is going to make an appearance on the conclusion of the reunion, and all hell is sure to break loose when she and Teresa come face to face again! Stay tuned!

TELL US – WHAT ARE YOUR THOUGHTS ON THE RHONJ REUNION PART 1 RECAP & EPISODE?