‘RHOBH’ Yolanda Hadid Reveals Sickness Played Role in her Divorce, Claims David Foster Told Her ‘Your Sick Card Is Up’ 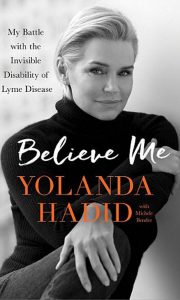 Yolanda Hadid is opening up about her life, family, divorce, and sickness in her upcoming memoir titled Believe Me: My Battle with the Invisible Disability of Lyme Disease.

In her book, the former Real Housewives of Beverly Hills star finally sheds some light on her divorce to ex-hubby and music superstar David Foster, and, boy oh boy, it is not pretty!

The 53-yr-old mother of models Gigi and Bella Hadid reveals her sickness and battle with Lyme disease did in fact play a major role in her divorce, revealing that while she was a supportive wife who did everything for her husband, she didn’t get the same in return.

She describes David, 67, as a “diamond in the rough” who “needed polishing”. She adds, “I put him on a healthy diet, helped him lose twenty-five pounds, redid his wardrobe, and never missed one of his doctors’ appointments”.

However according to Yolanda, she did not receive that same support from her husband when she was diagnosed with her illness and in fact had to attend most of her doctor’s appointments alone.

And during one of her last conversations with David, who had already moved out and was living in a Beverly Hills hotel, he reportedly told her “Your sick card is up.” Ouch. Shortly after that, David filed for separation.

As for her ex-husband and father of her three kids Mohamed Hadid, she describes him as a good man and great provider who however couldn’t remain faithful to her during their marriage.

While Yolanda is mainly focused on her health and the budding modeling careers of her kids these days, David has since moved on and has been linked to Christie Brinkley and Elizabeth Hurley since his 4th divorce. Yes, he’s been married four times.

TELL US – ARE YOU SURPRISED TO HEAR YOLANDA’S ILLNESS PLAYED A ROLE IN HER DIVORCE?