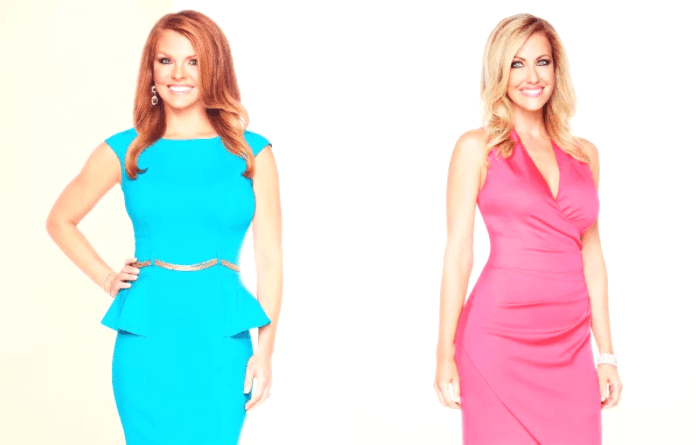 The second season of the Real Housewives of Dallas premiered last night and perhaps the most shocking part of the episode was finding out BFFs Brandi Redmond and Stephanie Hollman were no longer on speaking terms!

In fact Stephanie confided to castmate Cary Deuber that she and Brandi hadn’t spoken in 4 months which led everyone, fans included, wondering what caused the split.

Brandi then later revealed that it all started when Stephanie made some comments about her marriage in her Bravo blog last season.

In that blog, Stephanie, 37, had said Brandi’s marriage “was like watching a slow motion car crash and there was nothing I could do to fix it.”

I do have to say that I’m surprised those were the words that set Brandi off as her marriage was a train-wreck last season and very awkward to watch as a viewer. Plus it just doesn’t appear that Stephanie, who by all means comes of as a sweet person, meant any ill-will by it.

In an interview with the Daily Dish,  Brandi, 39, reveals she felt “blindsided” by the comments but adds that there were other issues at play when it came to the demise of their friendship.

“First I want to say that I love and adore Stephanie, and she’ll always have a special place in my heart. And I’ve never laughed so much like when I laugh with her, and we get each other’s humor,” said Brandi. “But I will say it was something that was escalating, and I kept reaching out to her to try to speak about it, but I don’t think she was hearing me. So at the end of it all, it was so much stuff and I just decided to block her out of my life and be done.”

Brandi however goes on to admit she did miss having Stephanie in her life and all their, you know, potty humor.  “I missed Stephanie. I missed her so much,” said Brandi. “And there were times, I mean, Bryan actually farted on an airplane, and I thought of Stephanie and I wanted to tell her. But I didn’t.”

Brandi also states that the drama involving her and Stephanie took a strain on their husbands who also happen to be close friends as they found themselves caught in the middle.

In her latest Bravo blog, Stephanie tells her side of the story first revealing how heartbroken she was over the end of their friendship.

“As you can image, this was a really tough episode for me to watch! When I signed up to do this show with my best friend, never in a million years did I think that I would be at odds with her,” shared Stephanie. “I suppose I was a little more naive than I am now, but I truly started on this journey with the intent of creating lifelong memories with my best friend and our families.”

Next Stephanie makes it very clear that she absolutely did not intend to disparage Brandi’s marriage in that now infamous blog.  She wrote, “I have read my blog post many, many times over and that is simply not what I said, nor was it what I meant. In my blog post titled “My Heart Broke for Brandi” I said, “I felt uncomfortable and awkward. I wanted the experience to be an amazing family memory for Brandi. I could tell that Brandi was hurting and felt awkward in the situation. It was like watching a slow motion car crash and there was nothing I could do to fix it.”

Stephanie made sure to thank Cary for being thee for her during the “tough” summer months without Brandi’s friendship. She blogged, “Cary reached out to me and provided me with something I felt I was lacking at the moment — friendship. Cary, I can’t tell you enough how much I appreciate all of the bottles of wine we shared, the sweet flower arrangements you made and the laughter you brought back to my life!”

She closes out her blog by apologizing to Brandi. Awww! “Brandi, I am sorry! I’m sure there is more that I could have done and words that I could have used differently, but I honestly did not know what I had done wrong,” wrote Stephanie.

Something tells me these ladies might have made up by now or at least that’s what I’m hoping. They truly had one of the cutest friendships ever on the Housewives series.

TELL US – WHAT IS YOUR TAKE ON THE DRAMA? DO YOU THINK BRANDI & STEPHANIE SHOULD MAKE UP?