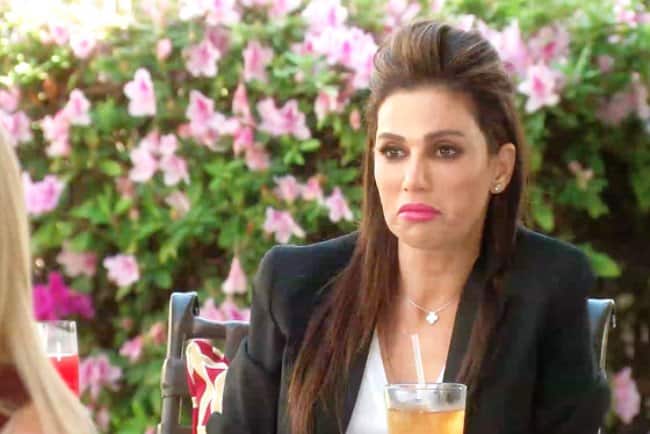 There was some confusion following the latest episode of the Real Housewives of Orange County during which Shannon Beador and some viewers were confused on whether or not OC newbie Peggy Sulahian had experienced breast cancer.

Peggy, 44, shared her breast cancer story during a lunch with Shannon during which she stated she had a double mastectomy despite testing negative for the BRCA gene (Breast Cancer Genes) and a mammogram not showing signs of breast cancer. She then said an MRI picked up on the cancer, but then stated she had to go back to the doctor because they didn’t find anything. Yes, the entire story was that confusing!

What is clear is that Peggy’s mom died from breast cancer and she did indeed undergo a double mastectomy. And in her latest Bravo blog, Peggy tries to clear up any confusion.

Peggy wrote, “I want to clear up my cancer facts…over a span of ten years, I scheduled mammograms and MRI’s every six months, my doctor found a mass in my right breast in the MRI. The immediate response to this news, was to schedule a biopsy. Despite being negative on the BRCA gene testing, the biopsy revealed pre cancerous cells within my right breast. Few weeks later, we scheduled a surgery to remove the 25 mm of mass, and sent the mass to the pathologist. In a matter of weeks, I was told that of the 25 mm removed, 3mm of it was already cancer.”

Peggy continued, “My options were limited to 3 choices: chemo, radiation, or removal of my right breast. To be the safest, I took the measure of removing both breasts instead of limiting myself to just one. I wanted to be as safe as possible, knowing that breast cancer runs in my family. Testing negative for the BRCA gene doesn’t guarantee the chance of not getting cancer. It’s a blessing that I caught the cancer before being aggressive. As of now, I am 100% cancer free. Please stay on top of your appointments in order to dodge this terrible disease. I want to emphasize that testing negative on the BRCA gene does NOT guarantee being free of cancer.”

She also added that while having a double masectemy wasn’t easy, she has zero regrets. Peggy blogged, “Putting your life in the hands of a reconstructive surgeon isn’t easy. It’s a long healing process mentally and physically, but completely worth not living the rest of your life in fear. I’m currently considering becoming active in the cancer communities, in order to offer my advice, hear more stories, and provide emotional support for women encountering the road block in their life.”

Peggy then discussed the drama with Tamra Judge over trying to get her to make up with former BFF Vicki Gunvalson, something Tamra wants no parts of.

“Tamra had me all wrong! She selectively reiterated the situation to Eddie, and made me look like the bad guy. My intention was to smoothen out the rocky patch between Vicki and Tamra, but I now understand that it’s not worth for me to involve myself. Tamra is evidently damaged by their past, and I figured that dwelling on it doesn’t resolve the issue,” wrote Peggy. “By telling her to not “dwell on it” was my way of persuading her into moving on. They’ve been talking about the same matter for years now, while they point fingers at each other of who to blame. I know my understanding of the story isn’t as clear as the people involved in it, but it doesn’t make me a terrible person for trying to help, and it certainly doesn’t give a reason for me to be attacked.”

Finally Peggy addressed Tamra’s comments about her having a “resting b***h face”!

Peggy blogged, “Life is short! We need to enjoy it! After all, that’s the secret to a long-lasting marriage: having fun. When I’m with Diko, it’s when I get to express who I really am. The only reason the girls think I have a resting b***h face is because my guard is up all the time. I’m always in defensive mode with them, but all it takes is a little warming up to me.”

So there you have it!

TELL US – DO YOU THINK PEGGY HAS A RESTING B***H FACE?