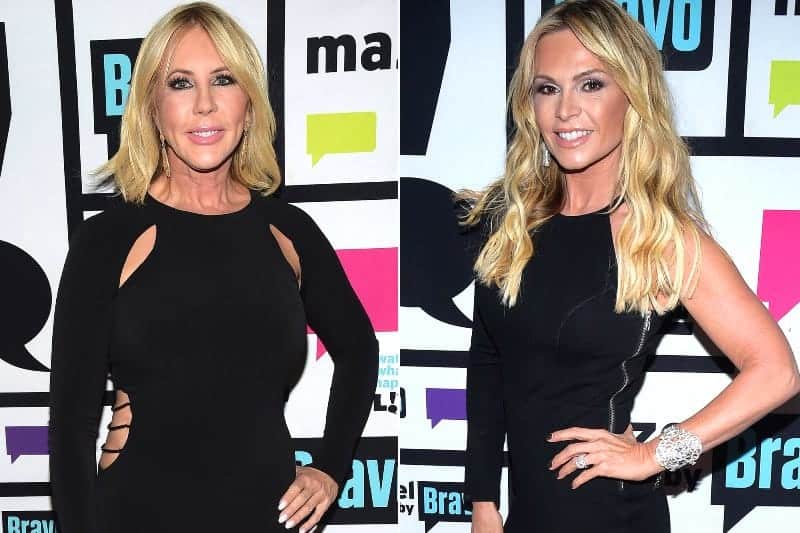 The feud between former BFFs Tamra Judge and Vicki Gunvalson rages on following the most recent episode of the Real Housewives of Orange County.

On last night’s episode of the series, Vicki celebrated her 55th birthday by throwing a dinner party during which her guest Ricky Santana, who just happens to be a former friend of Tamra and Eddie Judge, revealed he was saw Eddie kissing another man, seeming to confirm the gay rumors about Eddie.

Tamra was livid following the airing of the episode and called on Bravo to fire Vicki!  Well Vicki is now speaking out in her latest Bravo blog and is denying she set up the situation at her birthday dinner as some attempt to expose Tamra or Eddie.

Vicki wrote in her Bravo blog, “It was fun for me to have Jeana Keough, Lizzie, Gretchen, Slade and Ricky at my party. I met Ricky years ago through Tamra, and as you witnessed in this episode Ricky was Tamra and Eddie’s best man. We both saw the love Eddie has for Tamra and the love she has for him when they got married and I have no desire to hurt either one of them. This “rumor” about Eddie has been circling around for years and personally I don’t care either way because it doesn’t affect me. As I mentioned last week, I don’t care about his past, I don’t care if he is gay or bisexual or not. I like Eddie, he seems like a great guy and the fact that he and Tamra love each other is all that matters. Question I have is why can’t Tamra handle this topic of conversation like a mature adult?”

Vicki continued, “I invited Ricky because Gretchen said he heard about my party and wanted to come. That was it. There was NO ulterior motive, no set up, no preplanning of anything. The party was for me to celebrate turning 55 and I had no desire to even mention Tamra or Eddie’s name because they weren’t there and they weren’t invited. When Ricky revealed that he saw Eddie “making out with another man” I was shocked. Ricky and Eddie had been friends way before Tamra met him and now they are not. I have no idea why they had a falling out, nor do I want to know the details, but they did. Regarding this mess, a rumor is a rumor, and I don’t know why Ricky would say he saw this if it’s not true. Prior to Ricky revealing this, I had no facts surrounding this rumor, but now that Ricky said he saw them…is that another rumor or a fact?”

She also goes on to explain why she decided to reach out to Tamra on last night’s episode.

“When I decided to call Tamra to ask her to go get coffee it was because I’m tired of the fighting and I wanted to make amends. She is blaming me for something that she already knew about and just because I discussed it with Kelly that should not make her angry. I want to tell her my side of the story, but I doubt she will listen,” said Vicki.  “Tamra knew about this “rumor” in 2011 when she was dating him. She has been doing everything she can to alienate me with my friends and we weren’t even speaking when Kelly and I talked about it. I don’t know why she can’t let it go and move on. She has continued to make me uncomfortable at events that I see her at and it needs to stop. Tamra has lied about me to the ladies to get attention off her own problems and I want it to stop.”

“Why all the gay and lesbian talk on RHOC. Its too much #homophobic,” tweeted Tamra last night.

Tamra also makes it very clear that she believes Vicki set the whole thing up and called her a “liar”.  She once again repeated her call for Vicki to be fired by Bravo!

Tamra tweeted, “So who should win the academy award for this next scene ? had to be the worst acting #IThoughtSheKnew . #setup #liars #shouldBeFired”.  Screenshots are below. 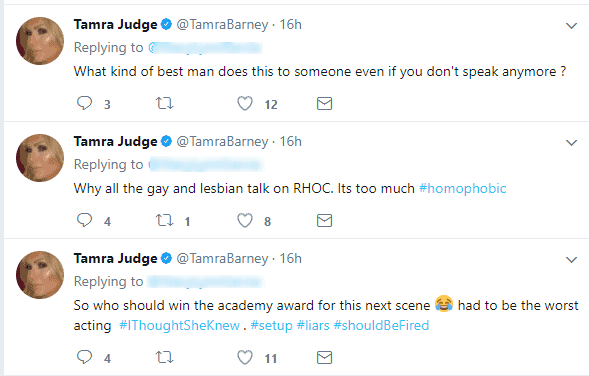 Must say with the way reality shows work, it’s very unlikely Ricky showing up to Vicki’s party and saying the things he said was all a mere coincidence!

TELL US – DO YOU BELIEVE THIS WAS A SET UP BY VICKI?