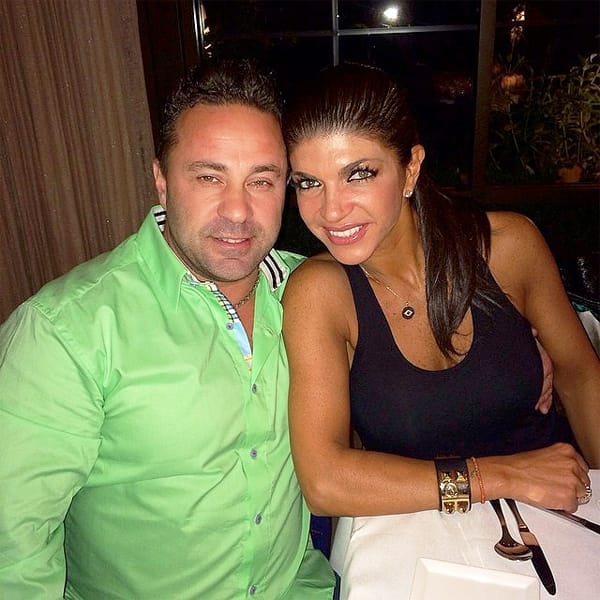 Real Housewives of New Jersey star Teresa Giudice isn’t holding back these days when it comes to shedding light on her troubled marriage to currently incarcerated husband Joe Giudice!

Just days after her shocking revelation in an interview that she was still mad at Joe for their legal troubles and wasn’t sure if their marriage would survive, new excerpts from her upcoming book, Standing Strong

, detail Joe’s heavy drinking leading up to his incarceration plus her anger and resentment towards him as she blames him for going to prison, and slams him for not being strong for her and their kids.

In new excerpts from her book posted by Radar Online, Teresa, 45, reveals how Joe partied with family and friends until the early hours of his prison check-in on March 23, 2016.

“I stayed upstairs in my bedroom, crying, by myself, knowing that I was going to be saying my own goodbye to him the next day. For what felt for forever,” she writes. Later, he joined her upstairs and the two had sex for the last time. “He was drunk, as usual,” she fumes.

And on the morning that Joe was scheduled to begin his prison sentence, His brother, cousins and uncles returned to their home for more drinking before their drive out to the Fort Dix prison.

“They drank three bottles of wine, a bottle of champagne, and a bottle of Johnnie Walker Blue — in the morning, before most people had their breakfast!” recalls Teresa. “Joe said he was eating and drinking like he was going to prison, which he obviously was!”

Joe wasn’t done getting wasted as he poured everyone another shot of Johnnie Walker Blue before getting into the car, and proceeded to make a toast. “To family, friends; to good health and freedom,” he said.

During their drive to prison, Joe asked for a stop at Burger King for a last meal. “He probably wanted something to absorb all the liquor he’d consumed,” guessed Teresa in her book.

However the last minute Burger King meal didn’t seem to help as Teresa says she later found out prison officials were unable to check in Joe safely as he was simply too drunk!

“He kept blowing the highest alcohol level on their device,” she claims. “Then he had to go to the medical department for five hours to sober up. It wasn’t until 7:00 pm that they let him in and gave him some food, a toothbrush, soap and sneakers.”

Radar Online reported last year that prison officials were upset with Joe for making a mockery of the system by showing up drunk, and placed him in Maximum Security due to that.

More excerpts from her book show Teresa airing out her grievances as she reveals Joe wasn’t strong before going away to prison and that he was constantly drunk. Yikes!

“He likes to be the strong man. Only he wasn’t that strong. He drowned his sorrows in alcohol from the day we were sentenced to the day he left for prison…All the kids and I saw was his drinking too much, all the time. He was constantly drunk.”

Teresa also makes it clear she doesn’t not feel bad that Joe is in prison!

“I didn’t feel sorry for him, though not for one second,” she slams her husband.  “I did my time, and now he has to do his…. He was the one who got us into all this bulls**t in the first place. He can blame me all he wants, which he does, very often.”

And finally in another excerpt, Teresa shares she fully blames Joe for their legal woes which led to prison sentences for both of them following a 39-count indictment which included charges of bankruptcy fraud. If you recall, Teresa finished serving her 11-month sentence back in December of 2015.

“He says that none of this ever would have happened if we weren’t on the show, which is because of me, but I know that’s not true,” writes Teresa. “It was his fault, because he didn’t do things correctly. And now we’re paying for his bad judgement. We’re all paying for it.”

Perhaps it’s just me but this doesn’t sound like a woman who wants to remain married to Joe. But then again this could all be a ploy to sell some books. Who knows?!

TELL US – ARE YOU SHOCKED AT TERESA’S REVELATIONS ABOUT JOE IN HER NEW BOOK?