Home Real Housewives of New Jersey News Is Siggy Flicker Having a Breakdown Cause RHONJ Fans Like Margaret Josephs? Plus Andy Cohen Tells Her to Get Off Twitter

Is Siggy Flicker Having a Breakdown Cause RHONJ Fans Like Margaret Josephs? Plus Andy Cohen Tells Her to Get Off Twitter 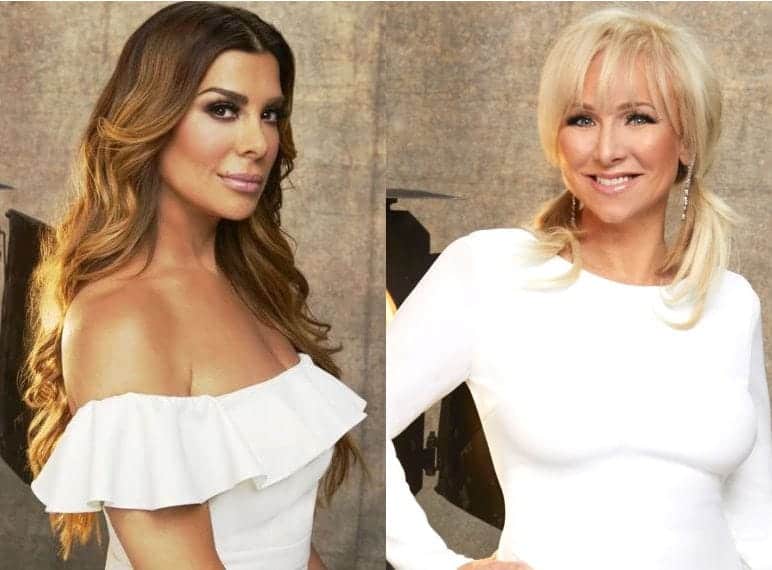 This season of the Real Housewives of New Jersey has been nothing but Crazyville all thanks to the many antics of Siggy Flicker!

As fans of the show are aware, Siggy continues to feud with newbie Margaret Josephs over what she feels is a betrayal to her. See Siggy introduced Margaret to everyone on the show, and feels Margaret was quick to push her to the side in order to befriend the other ladies.

And now a new report is claiming Siggy, 50, is having a hard time dealing with the fact that Margaret is quickly becoming a fan favorite.

“Siggy hates Margaret,” reveals a source close to the show to In Touch Weekly, explaining that there has been tension between the two women since the beginning.

“Siggy can’t stand that everyone seems to be on Team Margaret,” adds the insider. “Siggy recently had a total breakdown over all the media coverage Margaret is getting.” Yikes!

The feud got worse for Siggy when on Oct. 3,  Margaret posted a photo of the cast on her Instagram — and placed a mustache emoji on Siggy’s face. “Siggy felt that Margaret was mocking her,” reveals the show source. “She lost it and said that Margaret was ruining her life.”  That infamous Emoji-Gate post is below.

Meanwhile, Siggy also took to Twitter yesterday after taking issue with a photo Margaret posted on social media that appeared to be a joke. Siggy however didn’t take it that way as she felt the pic, depicting Margaret getting ready to push her off the stairs in a wheelchair, was “disgusting” and “inciting violence”.

Siggy posted, “Marge posted this pic which I find disgusting but Im happy we agree on 1 thing: she intentionally PUSHES me & she is proud of it. #RHONJ“. 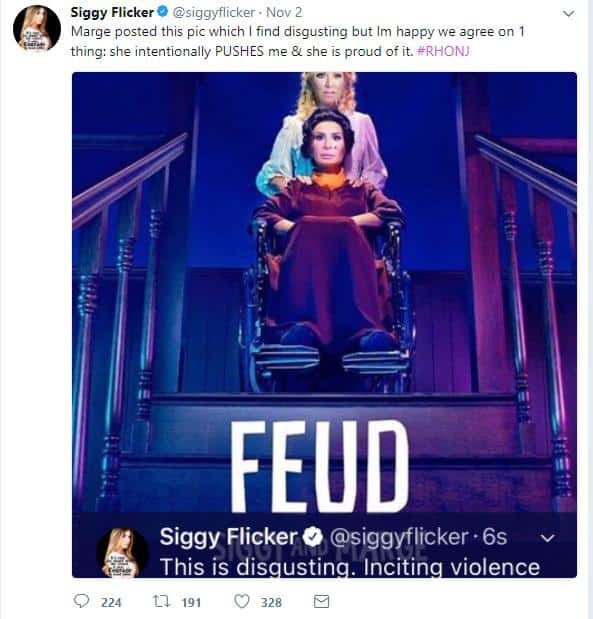 Which brings us to Andy Cohen who reportedly thinks it’s time for Siggy to get off the Twitter! Me thinks he has a valid point!

Page Six reports that during the commercial breaks of Wednesday night’s Watch What Happens Live featuring Dolores Catania, Andy was giving Siggy, who was sitting in the audience, some advice about social media.

Sources say Andy told Siggy  to “get off Twitter,” as he felt her habit of constantly responding to trolls will drive her “f—ing insane.”

“Take the poison out of your life,” Andy, 49, said to Siggy after reminding her there was no need to be as active as she is on social media. He added that “it’s toxic.”

Indeed if you take a look at Siggy’s tweets and replies on Twitter, she spends A LOT of time responding to fans and trolls. Here’s to hoping she takes Andy’s advice. The two reportedly hugged it out following the taping.

TELL US – THOUGHTS? DO YOU BELIEVE SIGGY IS HAVING A BREAKDOWN OVER MARGARET BEING POPULAR?