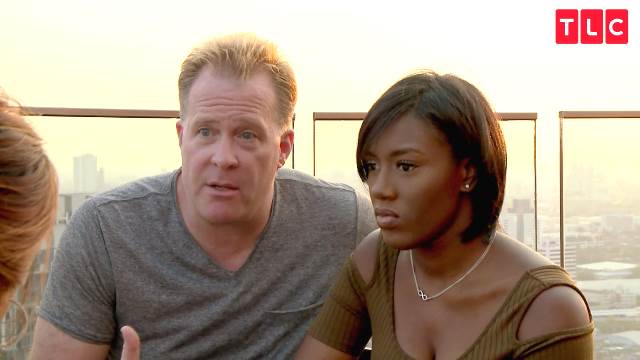 The latest episode of 90 Day Fiance aired last night and all fans of the show can talk about are Chris Thieneman and his wife Nikki Cooper!

The reason? Well David Toborowsky revealed that he and his fiance Annie Suwan would be living with Chris and Nikki upon their arrival back to the US, due to his financial struggles. During a lunch with all parties, Chris asked Annie if she would be willing to help around the house with things like cooking as she wouldn’t be able to work during her 90 days here. Annie seemed happy to volunteer her cooking services. Things however took a turn for the creepy when Chris asked his best friend’s fiance if she would also be willing to give him “Thai massages” while he lounges pool side. Yep. He went there.

Nikki looked on in horror but didn’t utter one word. And neither did David which has fans wondering what the heck is going on here?

Well Chris and Nikki are now responding to the backlash today and they have quite a decent explanation for what we all saw last night.

Nikki, who has her own Youtube channel, made the following post below on a private Facebook group about the show. To sum it up, she claims the producers of the TLC show pretty much fed those lines to Chris in order to stir up some controversy for the show. She says they didn’t get paid for filming (only the main couples do) and that the rooftop scene was actually shot multiple times so Chris could get his lines right. She also adds that this is why no one had a reaction to the shocking request.

“I will ONLY answer questions to things that has aired. I think it’s only fair & to answer everyone’s questions. Yes, the awkward scene of Chris asking for a massage was SCRIPTED. The producer asked him to say it & Chris had to say it more than once because it didn’t come off as natural. We were fed our lines while sitting at the table, which is why no one reacted. WE ALL KNEW WHAT TO EXPECT. We are NOT paid the only people that are paid are people who are asked for compensation & the couples. I’m a very outspoken person you’d be a fool to think i just sat there & allow my husband to disrespect me, Annie & our marriage.

If I came off as harsh, aggressive, or like I’m attacking members of the group i apologize, but I don’t agree with how Sharp/TLC is making my husband look for ratings. I have receipts of EVERYTHING we’ve paid for. I also have text messages between the producers & I️ & I️ have no reason to lie about ANYTHING.” 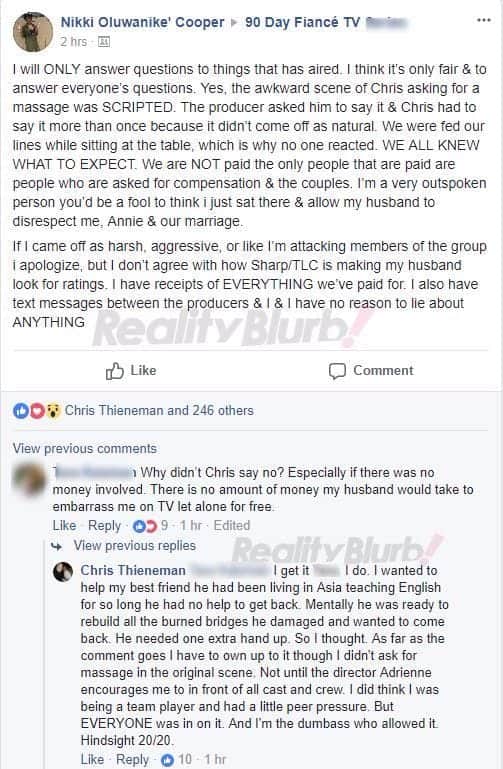 As you can see from the above screenshot, Chris also chimed in to defend himself when asked why he chose to go along with the producers, resulting in all this backlash. Chris stated that he agreed to do the show to help out his friend David. He also admits he said those lines due to peer pressure and being a dumba**. Can’t argue with him there!

Christ wrote, “I get it. I do. I wanted to help my best friend he had been living in Asia teaching English for so long he had no help to get back. Mentally he was ready to rebuild all the burned bridges he damaged and wanted to come back. He needed one extra hand up. So I thought. As far as the comment goes I have to own up to it though I didn’t ask for massage in the original scene. Not until the director Adrienne encourages me to in front of all cast and crew. I did think I was being a team player and had a little peer pressure. But EVERYONE was in on it. And I’m the dumba** who allowed it. Hindsight 20/20.”

In another post, Chris continues to do damage control as explains that a “Thai massage” is actually nothing perverted but simply a massage with your clothes on. He reaffirms once again that he was asked by a director to ask Annie about the massage. He also admits he should have “never agreed” to it. He adds that the network should have footage of the director feeding him these lines. Good luck having them air that! Not gonna happen buddy. 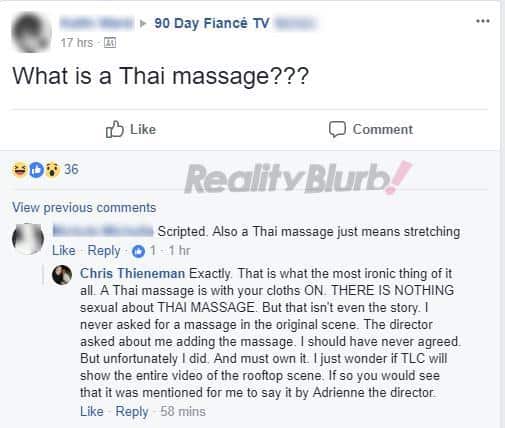 I must say their explanation is quite plausible as due to my blogging history, I am well aware of how the producers can manipulate scenes or feed lines to the cast. Nikki also revealed this was actually the first scene they shot for the show.

Below are more photos of Chris and Nikki. 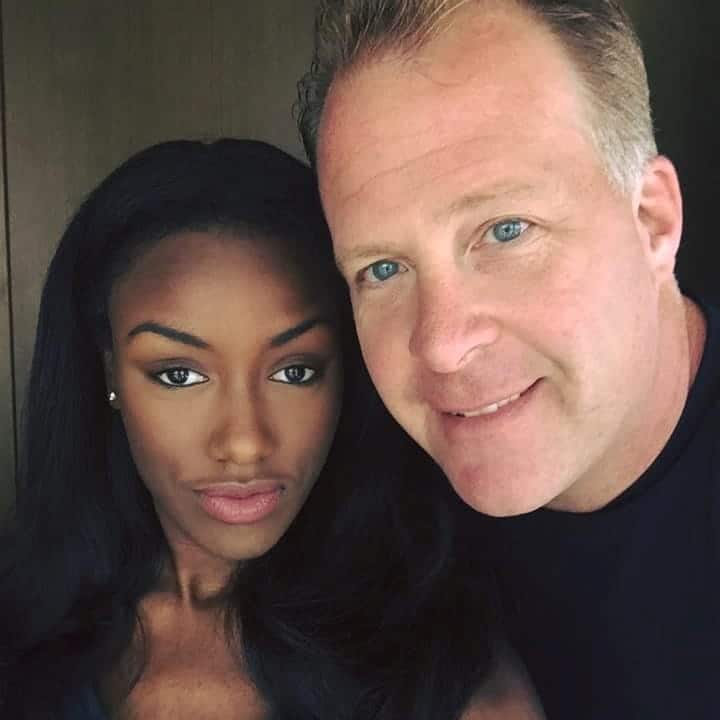 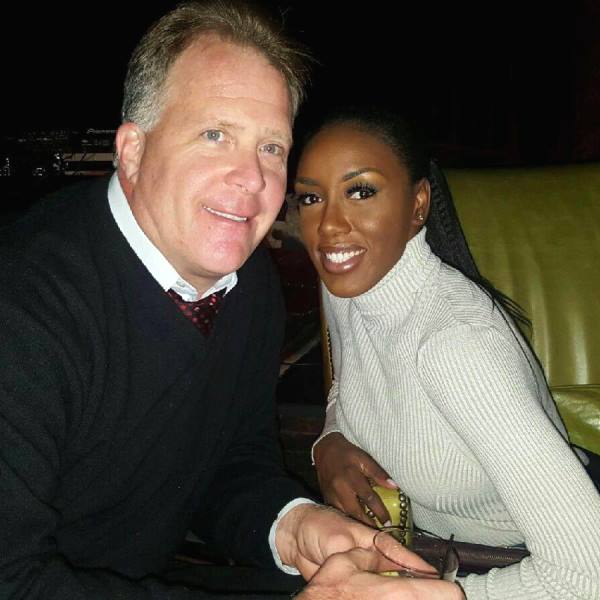 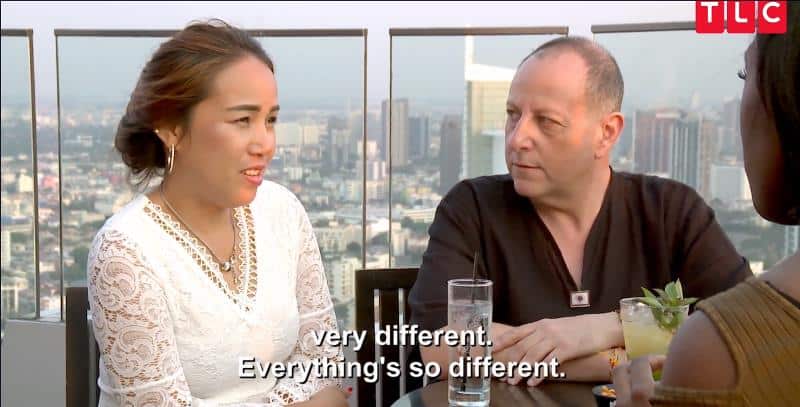 Annie and David during their awkward rooftop lunch.

TELL US – DO YOU BELIEVE IN CHRIS AND NIKKI’S EXPLANATION?