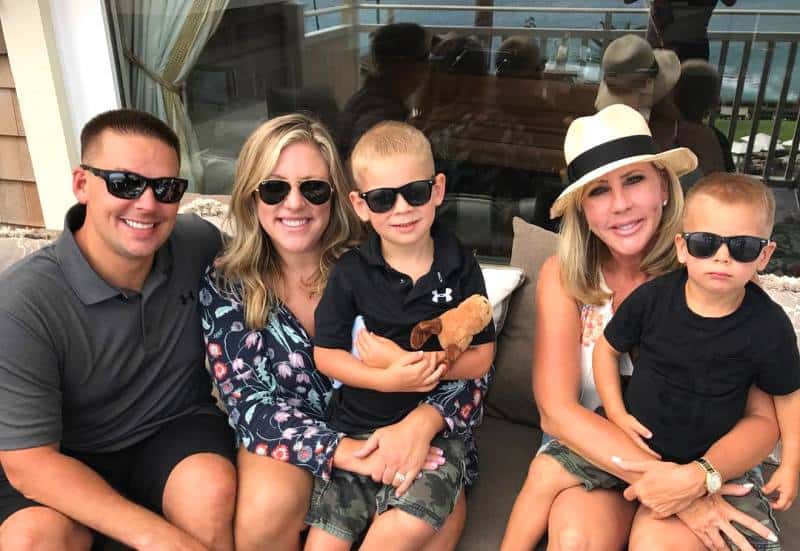 In today’s Vicki Gunvalson is going to freak out news, the Real Housewives of Orange County star’s daughter Briana Culberson is moving away from Orange County!

Even worse, Briana and her husband Ryan Culberson, along with their two sons, are moving out of state to near Raleigh, North Carolina.  Below Ryan and Briana explain their reasons for the move.

Ryan made the surprising announcement earlier today via Instagram when he revealed they just sold their OC home. Ryan wrote, “Today it became official! Moving back to my home state of NC in two weeks to live a simpler stress free life. We’re super excited for this next adventure and what the future will bring!”

When a fan asked him why he was moving since they bought their OC home to be closer to Vicki, Ryan responded: “No that was 2 years ago. It’s not working out.”

Ryan and Briana did move to Oklahoma some years ago due to his military job, but then Vicki convinced them to move back to the OC, even helping them out financially when it came to buying a home.

Briana chimed in by going into more details on why they were leaving the OC in the comments section of Ryan’s post.  “We wanted to try it out to see if this is where we wanted to raise our kids and we’ve decided we’ll be much happier in North Carolina!” she wrote.

“I️ would never move if i didn’t want to. My husband and children are the most important. I’ve never been happy in Orange County and have always wanted to live elsewhere. Ryan and i made this decision together but i was the one who actually pushed it a little more. I need a simple life for my health. I got an amazing job, we found an amazing house. It’s all good!!! Orange County is a mess and way too expensive. It’s not how i want to live my life and that’s MY choice.”

“We wanted to try it out after Ryans retirement to see if we would be happy. Over this past year I’ve been really unhappy living here. I’ve always connected more with my Midwest roots and I’ve never really felt live I’ve fit in in Orange County. It’s my moms style but not mine. The night i met Ryan 9 years ago I️ told him to take me away from here. I gave it a shot to make my mom happy but i have to do what’s right for myself and my family. We’re super excited and everything is working out how it’s supposed to!”

Another interesting tidbit was Ryan’s response when a fan asked if they needed help in securing a mortgage. He replied, “No sir thankfully we won’t need one there.”

The cost of living is cheaper in NC so perhaps they were able to buy their new home with cash with the proceeds from their OC home.

As for Vicki, she has yet to comment on this news. The Culbersons will uproot their family to North Carolina in just two weeks. Ryan’s post is below.

TELL US – HOW DO YOU THINK VICKI WILL TAKE THIS NEWS?