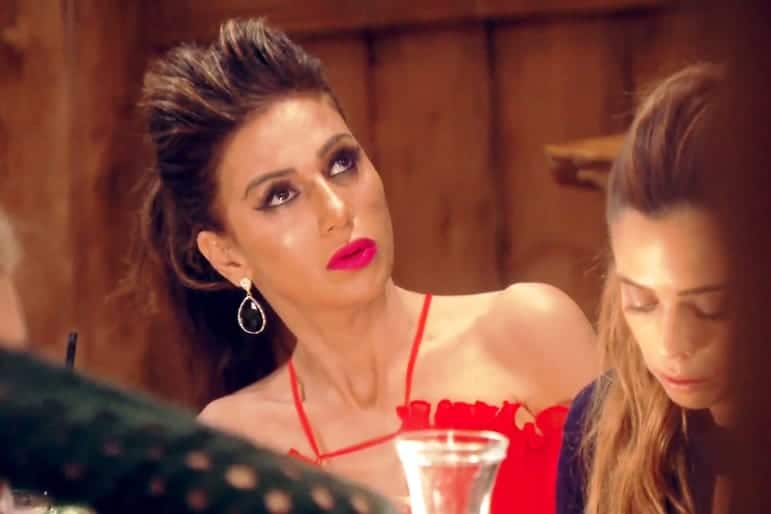 Real Housewives of Orange County star Peggy Sulahian is defending herself today after the super dramatic episode of the show this week.

Viewers saw all hell breaking loose during the cast’s final days in Iceland after Peggy secretly recorded some of the ladies drinking late at night. Things then took a turn for the worse when during a dinner, Peggy appeared to imply that Meghan King Edmonds was a bad mom by mentioning her baby had been crying for 10 minutes the night before.

In her latest blog, Peggy is adamant that she wasn’t trying to criticize Meghan’s parenting even though she seemed to be doing just that during an earlier conversation with Lydia McLaughlin. Peggy also disses Kelly Dodd, and reveals she was “hurt” by Vicki Gunvalson.

Below are excerpts from Peggy’s Bravo blog –

“For all the beauty Iceland has to offer, it was the ugliest place I could have been. I was enlightened by all that I learned during this trip. “Living in the here and now” takes on a new meaning for these women, and an apology is only words that we spread around to get what we want for the moment.

Bless Lydia for reaching out and trying to mediate after all that happened. Unfortunately for her, she didn’t know that I had recorded all that had taken place and was now going to see the vulgarities from the prior evening. Lydia means well; she has a tender and kind heart, but she has no idea what she is defending. She truly wants to see the good in people. Though that is an admirable quality, many do not deserve her kindheartedness.

Out of respect for Lydia, we headed to the dinner party she had planned. We arrived during a beautiful performance, and the restaurant and the entertainment were extraordinary. I was not comfortable with these ladies and situated myself away from them. When Kelly approached me to “apologize,” that’s when everything went south. Why couldn’t we cordially sit at dinner and enjoy the evening? Why did Kelly need to come and speak with me after her unkind and disrespectful words?

All I know is at a time when women are advocating to be respected, rather than standing by each other, we prefer to tear each other apart. And for someone to say I am sheltered because I don’t throw insults is ludicrous. Are you sure I am the confusing one? How does one respond to a woman to whom you apologize and she reacts with, “I understand but you are a little off” while she (Shannon) is the one yelling? Honestly, you can’t even get a word in edgewise while Shannon is yelling. I couldn’t explain that my story began with the time frame of when I heard Meghan’s baby cry — that is what drew me. I have no desire to criticize anyone’s parenting! But again, Shannon!

Regardless, I don’t know what bomb I threw at Kelly or what her nuke is, but her extravagant threats and continuous insults about my education, my lifestyle, and my upbringing need to stop! I will not speak about her, but my family and my husband have treated me with respect and with dignity. We choose not to use inappropriate language and know when to walk away. Somewhat like what Vicki is choosing to do. I was hurt by what she did or more by what she didn’t do. I did approach her to discuss the matter, and we did resolve it. We handled it as adults should. And though it will take some time, I do understand that she does not wish to engage in conflict for many reasons, not the least being her health.”

TELL US – DO YOU BELIEVE PEGGY WAS CRITICIZING MEGHAN’S PARENTING?