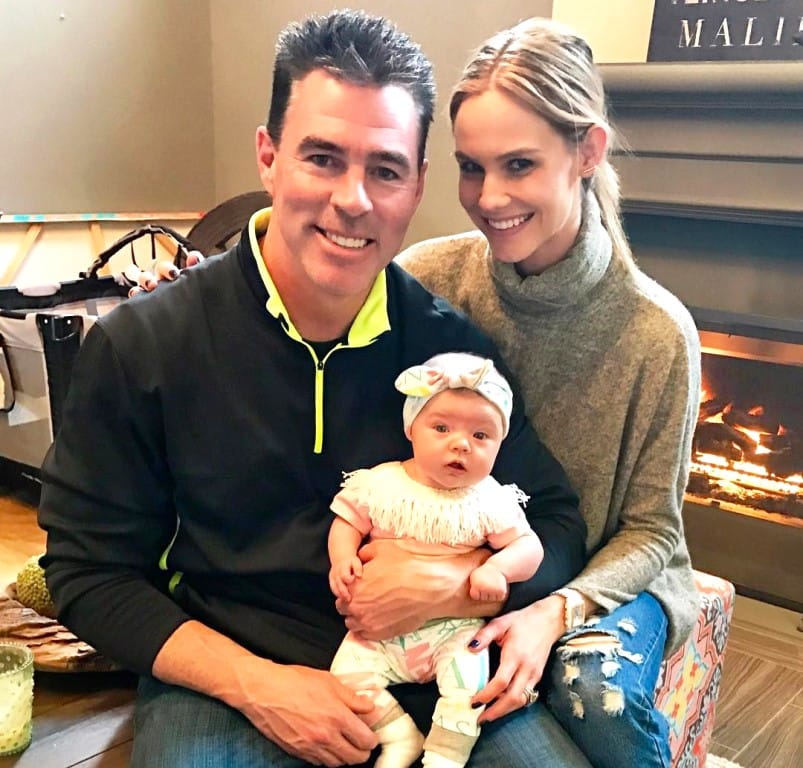 Just days after her daughter Aspen King Edmonds turned 1, the 33-yr-old Bravo reality star announced she is expecting her second child with husband Jim Edmonds in a blog. She also hints at the sex of her baby and goes on to detail the IVF process.

“So we’ve made it to the announcement: Aspen is going to be a big sister!” blogged Meghan.

“It was so hard for us to keep it a secret from everyone especially since we shared our entire IVF journey with Aspen on RHOC from the very beginning. Tonight on the RHOC reunion you’ll see that I’m only one month pregnant, but that was filmed five weeks ago: we are now ten weeks pregnant (and I’m feeling every bit of it)!” she wrote. “Because you won’t see any of our current journey on RHOC, I’ll share our beautiful journey with you here!”

Meghan revealed that she and hubby Jim started the IVF process again over the summer once Jim wrapped up his commitments during baseball season.

She wrote, “When Aspen was only a few months old Jimmy and I knew we wanted to add another baby to the mix. Yes, Aspen has half-siblings but we wanted her to be able to share in the joy of waking up to a sibling every day of her life. Plus her half-siblings are completely enamored by Aspen and they LOVED the idea of expanding our family even more.”

Meghan opened up about her decision to not use her two remaining female embryos from her earlier IVF process, explaining she had to start all over again due to Jim wanting to try for a boy.

“We started from scratch because we really wanted to have a boy (Jimmy has a total of five girls and one boy) and we only had two frozen female embryos. This was a difficult decision for us. Jimmy was adamant he didn’t care about the sex of the baby, he just didn’t want me to have to again endure the emotional rollercoaster that comes with IVF. (If we had decided to transfer one of the female embryos my drug regimen would’ve been much less involved than full blown IVF.) But I insisted: I was more comfortable with going through IVF again since I knew what to expect. So we moved forward with IVF,” she wrote.

She continued, “I felt like I handled this IVF much more in stride. I’m not sure if it’s because I knew what to expect or if maybe my body was used to the hormones, but it was easier. I was also armed with the emotional mindset to be so much healthier this time around whereas last time I was surrounded by the stress of filming RHOC… I ate super healthy, cut out most alcohol (next to impossible to do while filming), attended regular acupuncture sessions, and took daily walks. I also prayed, meditated, and read a lot.”

Meghan also dropped a major hint at the gender of her new baby!

“Fast forward to today and I am pregnant! I’m not feeling the greatest but we know that it will all be worth it in the end. Aspen will make a fabulous big sister at only a year-and-a-half old in June 2018! Oh, what about the biggest question: Boy or girl? Think blue this time around!” shared Meghan.

Congrats to Meghan and Jim!

The second part of the RHOC reunion airs tonight on Bravo at 9/8c. A preview clip is below –

TELL US – THOUGHTS ON MEGHAN’S PREGNANCY ANNOUNCEMENT AND PART 2 OF THE RHOC REUNION?