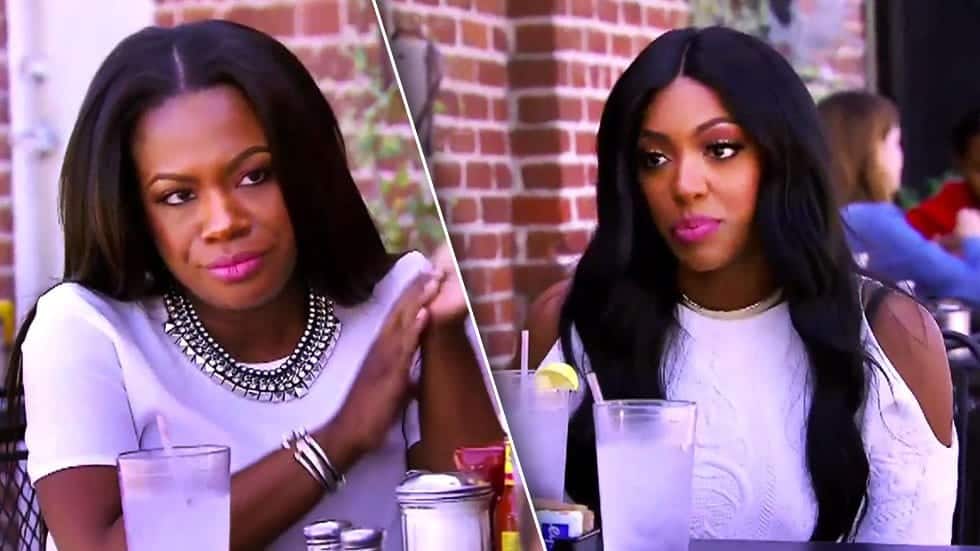 Who can forget last season’s reunion of Real Housewives of Atlanta? When everything unfolded and all the lies self professed Southern belle – Phaedra Parks had concocted regarding her former BFF with the help of Porsha Williams came to light. Well Kandi Burruss isn’t ready to forget or forgive Porsha. And I don’t blame her one bit.

The drama started last season when Porsha falsely accused Kandi of planning to drug and sexually assault her. The lie was ultimately exposed during the reunion when Porsha revealed Phaedra was the one who told her the info.

More than likely things will never be the same for Porsha and Kandi who used to be friends. If you recall, Porsha even stared in Kandi’s play, “A Mother’s Love”. Fast forward to now and nothing has changed between the two since the reunion as Kandi is being more cautious though some people think Kandi needs to forgive and move on. She has moved on all right just without Porsha.

In the new season, Kandi basically ignores Porsha like she doesn’t even exist despite her trying to make amends. Maybe time will heal this wound, I guess we will see.

Kandi has however taken time to respond to the haters who think she is over reacting and needs to get over it. Recently, Kandi took to her Instagram page to say, “Leave me alone”. She then posted a fan’s opinion which basically stated that while Kandi may have forgiven Porsha, she definitely doesn’t want a relationship with her.

IS PHAEDRA PARKS BEGGING RHOA PRODUCERS FOR HER JOB BACK?

Kandi wrote, “You can’t just falsely accuse someone of trying to drug & take advantage of you on camera with the intent of defaming them & think it’s just gonna be ok a month later. I’m still dealing with trolls who have taken what she said & run with it even though the truth came out that it was a lie. Stop putting a timeline on when I’m supposed to forgive and forget.” 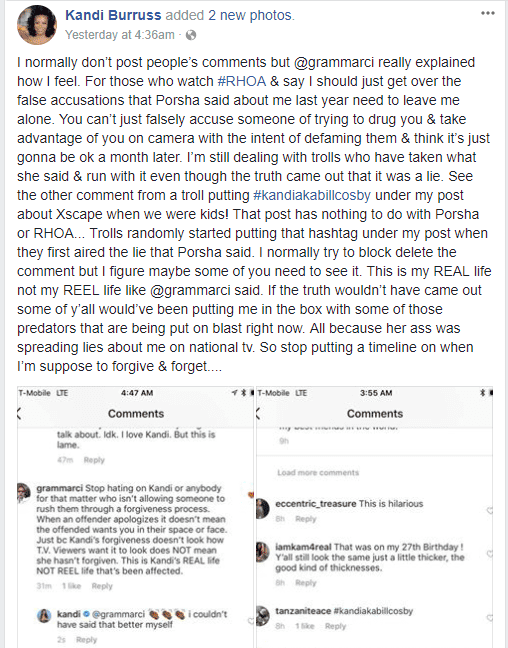 So what does Porsha have to say about all of this? Initially the Dish nation star was hopeful that she and Kandi could put the drama behind them. Now she has finally realized that’s not going to happen any time soon at least not on season 10. According to Porsha, “She came into the season just wanting to move forward, of course. I had already apologized at the moment when everything was kind of revealed at the last reunion. And then I came into this season wanting to make sure she really knew it again sincerely from me.”

Since the season started, Porsha hasn’t been too happy about some of the things Kandi has said earlier this season about her. And after watching, it seems she is no longer keen about mending her relationship with Kandi.

TELL US – SHOULD KANDI FORGIVE AND FORGET? OR DOES SHE HAVE A RIGHT TO BE UPSET?