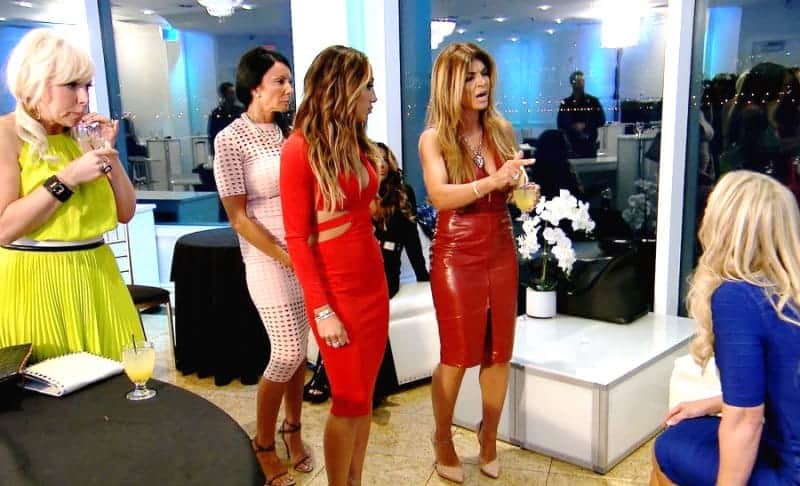 It truly is the most wonderful time of the year with the Real Housewives of New Jersey. I’m not referring to Christmas, or Hanukkah, or the end of another year. I’m talking about the Posche Fashion Show.

It comes but once a year, it only lasts one night, and no one is EVER jolly.

Well, except maybe Kim D.  She LOVES it! And why shouldn’t she? Her store gets a million, or so, dollars worth of free publicity, and when it comes to drama, it’s the best show in town.

This event has served as the backdrop of shifting alliances, misplaced loyalties, and violent outbursts for years. We’ve seen friendships end, hair ripped out of heads, even cops called to the scene. And Kim D. did all she could to ensure that this year’s show wouldn’t disappoint.

She laid the groundwork for the drama early by inviting Siggy and Dolores to walk the runway. Kim D knew that Teresa, Melissa, and Danielle hated her, and that Siggy and Dolores’ presence at her show would be a sore spot..particularly for Teresa.

Kim D. and Teresa go WAY back, and if any of Teresa’s friends  thought about it for second, they’d see that Teresa was complicit in all of the drama and humiliation they suffered at the Posche Fashion Show.

Kim D loves to start rumors, and this year her victim was Teresa. According to some of the the people on Kim D.’s staff, Teresa had been seen out at a nightclub, looking cozy with a gentleman friend. She’d told this rumor to Dolores and Siggy at her store, and was thrilled to repeat it, and bring her staff member over to “verify” the story when they arrived at the fashion show.

Siggy and Dolores again came to Teresa’s defense. They said she would never cheat on her husband, Joe, and that spreading such lies was potentially damaging to Teresa’s family.

The other ladies, who had vowed to never attend another Posche event in this lifetime, did, however, agree to go to the fashion show with Teresa to confront Kim D.  Melissa and Danielle were understandably nervous. Neither had attended in years, and for good reason.

Danielle was chased from the venue the last time she went…by Teresa. She also had her hair pulled out of her head, when Jacqueline Laurita’s daughter Ashlee grabbed her.

The last time Melissa went to the fashion show, she was accused of being a stripper by a man that Teresa and Kim D. “didn’t know”, but who nevertheless, tried to say Melissa danced for him at his gentlemen’s  club.

Maragaret has never even met Kim D., and has never attended one of the fashion shows, but she certainly wasn’t going to let that stop her from being a part of such an eventful evening.

Teresa has trained her “soldiers” well. All three were ready to back her without question. These ladies aren’t stupid. With Teresa, you’re either fully with her, or you’re her enemy, and as Danielle said, it was a relief to “finally be on Teresa’s this time”.  No kidding! Teresa’s relentless.

When the foursome arrived at the fashion show, Teresa made a bee line for Kim D., who said, “welcome”, and greeted them with the fakest smile you’ve ever seen.  She knew why Teresa was there, but that smile said she knew she had Teresa right where she wanted her.

When Teresa asked her how she could spread such vicious and baseless gossip, and told her how hurtful it was, Kim D. responded  with a breezy “too bad”, and a shrug.

Now, you know our girl Teresa wasn’t having THAT! And while Kim D. was quick to remind Teresa that she’d “leave in handcuffs” if she touched her, she also wisely positioned herself just out of Teresa’s reach.

Kim D. continued to taunt Teresa, who did not take the bait, and pull her out of the fashion show by her weave. Teresa even managed to keep her cool when Kim D. uttered the dreaded “P word”. No…not that! Prison. Teresa does NOT like to be reminded of where she really was when she was away at “camp”.

After some more yelling, Kim D. sauntered off, leaving all six of the cast members alone. Immediately, Teresa and her minions turned their ire on Siggy and Delores.

They wanted to know why they sat back, and allowed Kim D. to speak to Teresa that way. And how could they still walk in the show? Melissa was especially vocal, and Dolores got right up in her face, and told her to stop telling them what to do.

Melissa was shocked, and began to regret the invitation she’d extended to Dolores, and the others, to join her on a buying trip to Milan, with Margaret.

Dolores was like an older sister, Melissa lamented, and while she wasn’t prepared to disinvite Dolores, this type of disrespect wouldn’t tolerated. Dolores, Melissa declared, was on her “sh*t list”.

Dolores should probably watch her back. Melissa cut her teeth while locked in constant combat with Teresa, and it’s made her pretty feisty! It was Dolores’s ex husband Frank Catania, who convinced Siggy and Dolores that their loyalties were out of whack.

The morning after the fashion show, he told Siggy and Dolores that they should have left the show, and that they hadn’t sent the message to Teresa that they had her back.

Siggy went to Teresa’s house to talk it out, and Teresa was uncharacteristically receptive. She even returned Siggy’s apology about the events of the night before. Teresa explained that she was hurt by their lack of support, and that she was particularly disappointed in Dolores.

Siggy, of course came to Dolores’s defense. She said they they both loved Teresa and Melissa, but that the constant presence of Danielle and Margaret was putting them off.

Siggy also said that she was really hurt by a comment that Margaret had made at the dinner the night before the show. And rightly so!

When the ladies were telling Siggy and Dolores why they hated Kim D., Siggy made the comment that she chooses her friends based on their treatment of HER, not problems they had with other people.

Margaret responded with “Hitler wouldn’t have killed me, does that mean I should think he’s a good person”?

Ok, to an extent, I can see her point. Just because someone hasn’t done anything to you personally doesn’t mean their misdeeds against others are irrelevant. But HITLER?! No. Just….no.

Siggy may be right…Margaret’s missing a sensitivity chip. And it looks like that may come back to bite her next week.

The ladies are headed to Milan, and they’re bringing ALL of their baggage with them. Stay tuned!

TELL US – WHAT ARE YOUR THOUGHTS ON THE RECAP AND THE SHOW?