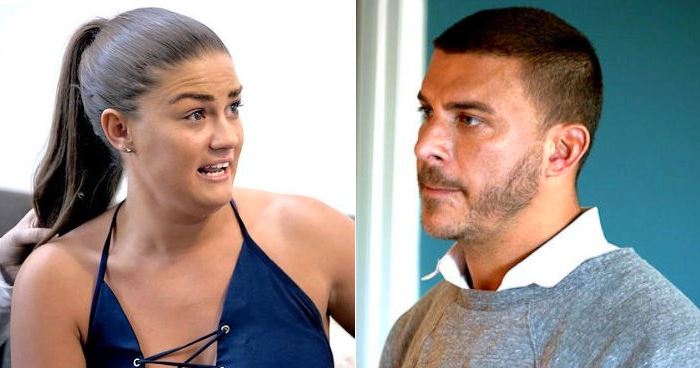 Did anyone else lose sleep over the fact that there very may well be a mini Jax Taylor welcomed into this world in 9 short months?

As the Vanderpump Rules gang rallies around Brittany trying to console her after finding out that her boyfriend is a dirt bag, Scheana finally comes-to from her love fest 2017 with Rob and demands to know exactly what is going on. This forces Brittany to retell the tale while Kristen is a literal shoulder for Brittany to lean on. I love that Kristen is taking on the role of Brittany’s caretaker. Cuz ya know, she slept with Jax just a few short years ago while he was dating Stassi. Pretty twisted, but I am glad she knew no one forgot that Kodak moment and called herself out for that. Props to you, Kristen.

Brittany cannot take it anymore, even after Lisa, donning a feathered Mardi Gras mask, tries to intervene. Brittany makes it perfectly clear she is angry (if she finds out it’s true she even threatened to “punch him in his fake nose”) and leaves the party while Jax heads back into the bar. His boys try to explain that no one actually saw “the penetration” between Jax and Faith and Sandoval proceeds to make the hand motion, just in case anyone was confused about what penetration meant.

Over at Lisa’s sprawling chateau of perfection, Stassi rolls up just as Lisa gets her brand new Rolls Royce. #goals. This season, Stassi and LVP are evidently BFF’s since Lisa is giving Stassi the opportunity to plan a party for her. Man, I wish I had a Fairy God-Lisa, too. Life is just so easy for these people.

Brittany heads over to Katie and Tom’s apartment since it is legit just around the corner in the same building and on the same floor. Katie is there, alone, because no one likes her enough to invite her to any birthday parties, and hears about the time Brittany found fake eyelashes in the apartment she shares with Jax and how her gut is saying that this rumor is actually true. Jax enters Katie’s apartment begging Brittany to talk to him, but she denies him the opportunity and instead tells Katie she is going to Vegas because she is “single” now. Go girl.

James: Where. Is. Logan? You user, you. James, sans Logan but plus Racquel, sit down to meet with Fairy God-Lisa. Not sure how this came about considering that LVP basically stated she hated James’s guts last season, but hey, new season, new friendships. Racquel gets herself a gig at Vanderpump Dog because the Bravo people said they couldn’t fit another cast member in the opening credits and James scores himself a dj-ing gig at Pump on…..TUESDAYS! James gets a 327th chance to spin at LVP’s place cuz she is a softie like that.

Meanwhile, once Brittany re-enters her shared apartment with Jax, we get the truth. Yes. Yes Jax Taylor slept with Faith. I am surprised he told the truth. I am not surprised he did such a trashy thing. You know you’re a terrible person when even the DOGS hide when you enter a room, Jax.
At the 2nd birthday party Katie wasn’t invited to, James shares the juiciest piece of the cheating scandal to his crew. Faith missed her period.

Everyone loses it just trying to wrap their minds around the idea of “more of Jax’s DNA floating around.” Panama Sandoval (did you get a load of that hat?) realizes that Schwartzie is schwasted and missing. Panama Sandoval finds Schwartzie and the two begin a cry fest where we viewers are given the opportunity to see just how much make-up Sandoval wears (see: tear stain lines on an otherwise perfect complexion). The two commiserate how they need to make something of themselves. They should really look on the bright side- at least they aren’t in Jax’s position. Jax sits on the balcony like a gargoyle wearing a backwards Taco Bell sweatshirt as he watches his once girlfriend head out the door and grab single life by the horns.

Sandoval thinks it would be a genius idea to roll up to the Long Beach Pride parade to surprise Lisa and “keep the partnership alive.” I think he just wants an opportunity to dress up, but alas, he only goes with some (make-up) glitter tastefully highlighting his temples. Schwartz and Ariana all don the same look and they gather together, along with Ken and Lisa, to discuss Brittany and Jax’s issue. They decide to go out and explore what the parade tents have to offer and they stumble upon the S&M tent where we get treated to Sandoval getting smacked around with a leather whip. It. Was. Weird.

Buuuut not as weird as PATRICK and his man bun. Stassi’s on-again off-again boyfriend is back on again and we get to see what a date is like with those two. Patrick likes to throw around “big” words such as “juggernaut” and “galvanized” while Stassi threatens his life repeatedly if he were ever to break up with her….again. It is precious. They seem like a PERFECT match. My eyes are rolling hard.

Later, Jax enters for his bartending shift rocking a blue shirt instead of a black shirt. OF COURSE Sandoval points that out immediately and Jax retorts back he “likes to live on the edge.” Yea, we know you do. Remember that time you slept with someone WHO WASN’T YOUR GIRLFRIEND and then didn’t wear a condom? While Sandoval tries to talk sense into Jax, and not just fashion sense, Lisa (have I mentioned how much I love this woman?) checks in on Brittany.

Brittany seems distraught when talking to LVP, but once she walks away and Scheana and Ariana come over to see how she’s holding up, Brittany lets them in on a little secret: She slept with Jax before coming in to work. Ya know, the same Jax who confessed he cheated. The same Jax who admitted himself that he may need to go to “therapy” for his behavior. The same Jax who may have impregnated Faith. Yea, that guy. Brittany, honey, that was a bad move. There are plenty BETTER fish in that big ocean out there…

TELL US – WHAT ARE YOUR THOUGHTS ON THE VANDERPUMP RULES RECAP AND LATEST EPISODE?