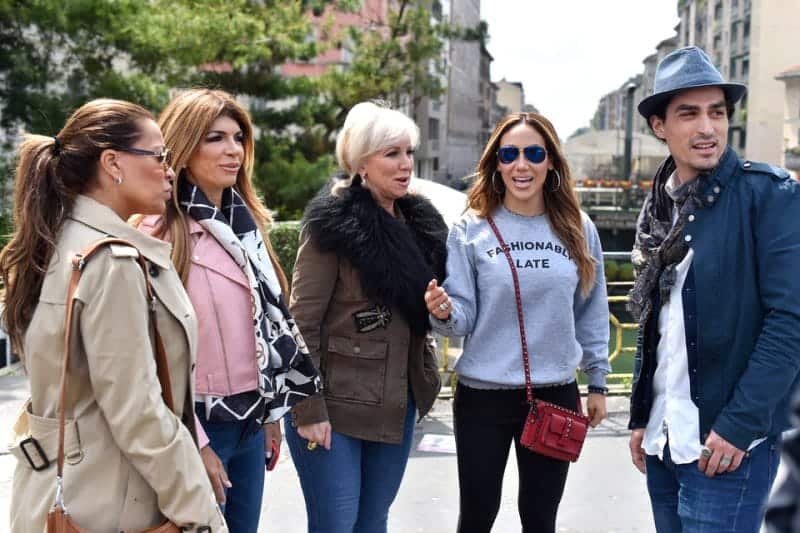 Well, the ladies of the Real Housewives of New Jersey have done it again. Wall to wall drama! You couldn’t look away.

But a small disclaimer: if certain aspects of American culture, or recent events have embarrassed you, or you worry that the rest of the world thinks we’re all obnoxious and crass, this episode may induce a deep and abiding shame.

When the ladies go on trips together, they always act the fool. They’re forced to  spend more time together, they’re in closer quarters, there are more drinks. But come on, girls, you’re crossing the pond, pull it up a little!

We picked up with the ladies as they were preparing for their trip to Milan, and everybody was still mad at somebody because of the scuffle that took place at The Posche Fashion Show between Teresa and Kim D., and Dolores and Siggy’s failure to defend Teresa as vehemently as she would like, i.e. not actually stabbing Kim D in the throat.

Siggy had gone to talk things over with Teresa, and let her know that she and Dolores really did have her back.

While Teresa felt that Siggy should have stood for her in front of Kim D., instead of in private, she was more angry at Dolores, who hadn’t reached out to her at all.

Melissa was also angry with Dolores for getting in her face when Melissa questioned why she and Siggy would still walk in the show.  Melissa felt disrespected by Dolores, whom she said was like a big sister, and rightfully so. Dolores’s reaction was way over the top.

Siggy was still hurt and angry with Margaret for likening Kim D and her gossip to Hitler and his genocide.  Dolores and Danielle still had hard feelings toward each other because Danielle accused Dolores of making negative comments about Teresa, and Dolores denied it, and called Danielle a liar and “scum bag”.

That’s A LOT of tension. But it wasn’t going to stop these ladies, so they packed up, and took the act world wide.

It started out okay, in the same way that things get eerily quiet before a tornado.  Dolores even commented that she didn’t have the “gut feeling” that she usually does when things are about to go wrong. But alas, her gut betrayed her.

When they arrived in Milan, Margaret and Melissa had work to do, Siggy and Dolores wanted to shop, and Teresa and Danielle wanted to eat, so they went their separate ways with plans to meet up for dinner later.

Now, this seemed like a wise choice, as it would keep the ladies with tension between them apart. BUT it also kept the “friends together, which meant they spent the afternoon talking behind each other’s backs and fueling each other’s fires….especially Danielle.  That girl is up to something. Danielle was embarrassed, harassed, called every name in the book, and ostracized the last time she was on the show. By Teresa. And now they’re friends?!

Danielle has an axe to grind, and she gets a little too much pleasure out of watching these women squirm. She’s constantly in someone’s ear, egging them on.  When they all got to the restaurant…another lovely place, filled with lovely, unsuspecting people out for a lovely, quiet dinner….they were all still in a good place.

The ladies were laughing and talking. The drinks were flowing. Even Dolores and Margaret, the tee totallers of the group, were partaking. Good times.  Then Teresa got a text from her husband, Joe, which she read to the group. In it, Joe jokingly called Teresa a cheater. (Oh boy!)  But Teresa laughed it off. It was Siggy, who decided that this was just the segway she needed to bring up the “elephant in the room”. Oh Siggy…why?! Things were going so well.

Of course, this was all Teresa needed, and went on her usual rant about loyalty, and how Siggy and Dolores should have defended her more. Into this fray, jumped Melissa, telling Dolores that she didn’t appreciate the way she’d gotten in her face. Dolores apologized, and said that she had immediately regretted her reaction to Melissa.

Dolores and Siggy also reiterated that they had, indeed, defended Teresa’s honor, both at Kim D’s store, and again at the fashion show when she’d started talking about Teresa again.

Danielle inserted herself into the conversation at that point, saying “I didn’t see you do it”. This annoyed Siggy, because the situation had nothing to do with Danielle, and because, as Siggy put it, “six months ago, they (Danielle and Teresa) were mortal enemies”, so who was Danielle to question HER friendship with Teresa? It was more than six months ago, but Siggy had a point.

Siggy eventually dismissed Danielle, altogether, and zeroed in on Margaret. That’s when things took a turn. Without even looking at Margaret, Siggy told the others that she was really upset about Margaret’s Hitler comment, and felt it was highly insensitive to compare a petty squabble with Kim D. to the atrocities of Nazi Germany.

Again, Siggy had a point. The comment was in extremely poor taste, particularly since Siggy is Jewish, and the daughter of a holocaust survivor. Margaret seemed completely blindsided. After all, this was the first she was hearing that Siggy was offended. At the time the comment was made, Siggy hadn’t said a word.

Margaret tried to explain that her comment was “just an analogy”, but Siggy was having none of it. Siggy said that Margaret was an anti Semite, and when Margaret stood up to confront her, Siggy told the others to “tell that bitch to sit down!”

Teresa and Melissa came down firmly in Margaret’s side, saying that Siggy had gone too far by calling her an anti Semite. Hmm..I guess for Teresa, loyalty only flows one way. Interesting.

Danielle, clearly feeling left out,  also chimed in, saying Siggy was “over the line”. She then walked over to rub Margaret’s shoulder, and inform the others that Margaret was so upself she was shaking.  Margaret was near tears by this point, and said that she absolutely did not hate Jewish people. In fact, she said, her children were Jewish, referring to the step children from her first marriage, who no longer speak to her because she had an affair and left their father for her husband, Joe.

Siggy told Margaret that she knew plenty of people who were anti Semitic and still married Jews.  Danielle again tried to insert herself  into the conversation, but Siggy told her that it was none of her concern, and that she had known Margaret for “six seconds”, and needed to stay out of it. Siggy said Danielle was “f**ked up” and that she was done talking to her.

Danielle went ballistic! She started screaming, cursing, and throwing silverware and plates across the table. Luckily, no one got hit. But damn, what is it with these ladies and flatware?! No table setting is safe around them!

The ladies left the restaurant in shame, following behind Danielle, who continued to scream profanities, leaving the lovely Milanese diners slack jawed and scandalized in their wake.

The following morning, the ladies were exhausted. And who wouldn’t be? I was exhausted just watching it, and there were still a good 15 minutes left in the show!  Melissa, a first timer in Italy, was determined to salvage the trip, and wanted everyone to go on a canal tour of the city.

Both Siggy and Danielle were spent, and begged off in fear of reigniting the drama of the night before, but Siggy called Danielle, and suggested that they meet up and talk.  Siggy apologized for taking her anger out on Danielle, and Danielle halfheartedly accepted.

Soggy explained that her blow up was a long time coming, and that she’d been angry at Margaret since  she first introduced her to the others because Margaret had been “attacking” her ever since. She said she was also still hurt by the “Soggy” Flicker comments Margaret had made. Yes…she’s still on that.

After the canal tour, Melissa, Teresa, Dolores, and Margaret had lunch, where they too rehashed the events of the evening before.

Dolores, of course defended Siggy, and said that her own reaction to Margaret probably would have been worse.  Dolores also told Margaret that neither she nor Siggy liked the way that Margaret always seemed to be talking about things she didn’t even know about, and choosing sides, like she did with Kim D.

Teresa and Melissa were quick to jump to Margaret’s defense. They said Margaret was no anti Semite, and that they felt that Siggy was just using the Hitler comment to deflect from the “real” issue of not having Teresa’s back.

Dolores said she was inclined to agree that Margaret wasn’t anti Semitic, but that she was “anti-Siggy”.  Margaret conceded that she was, indeed, becoming “anti-Siggy”, but  only because Siggy always seemed to get offended and start yelling at her.

But Margaret also said that she never meant to hurt Siggy, and asked Dolores if she thought there was a chance she and Siggy could ever be friends.

Dolores told Margaret that she didn’t see Siggy coming around. Teresa the chimed in with “ yeah, Siggy and Margaret are like oil and vinegar” because they don’t get along.

The others explained to Teresa that the saying is “oil and water”, since, as any Italian knows (especially one who’s written three cookbooks) oil and vinegar get along famously. Oh, Teresa, you’re a national treasure! But hey, at least they ended with some comic relief.

But stay tuned! The trip isn’t over yet. And um…Happy Hanukkah!

TELL US – WHAT ARE YOUR THOUGHTS ON THE RHONJ RECAP AND LATEST EPISODE? TEAM SIGGY OR TEAM MARGARET?