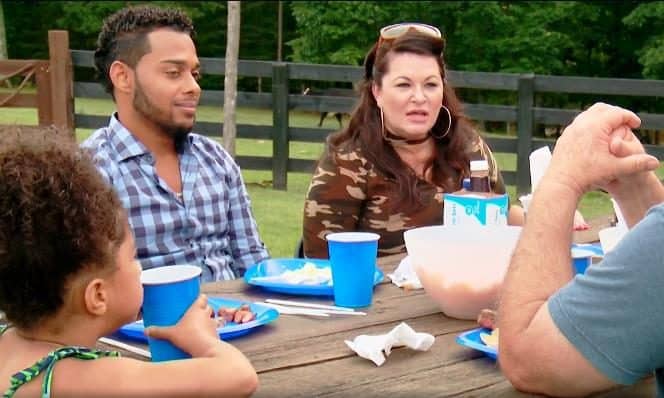 Tonight marked a number of firsts for TLC’s 90 Day Fiance as it brought us the first cancelled wedding in the history of the show plus the revelation that a couple had secretly gotten married!

Viewers of the hit series saw Luis Mendez, 26, walk out on his “fiance” Molly Hopkins following multiple blowout fights about her kids, his lack of maturity, and of course let’s not forget ReligionGate.

All of this drama led to the couple’s decision to cancel their wedding with Luis’s brothers (they live in New Jersey) coming to pick him up. Following Luis’s departure, Molly, 42, was forced to admit to the show’s producers that Luis could legally stay in the country because the two had secretly gotten married! Molly’s confession matches our earlier report that they got married on July 20 after we uncovered their marriage certificate.

Well the TLC network is now responding to the shocking revelation and shedding more light on the issue.

The official TLC twitter page shared that “Molly & Luis signed the marriage license on a day they were not scheduled to film so the crew did not know the marriage had been made official!”

They added that “Molly didn’t reveal the truth about the marriage until two days after Luis left.”

Another interesting tidbit was that Luis’s brothers were actually already on their way from New Jersey for the couple’s wedding, making it quite convenient for them to pick him up once he informed them the wedding was called off.

“Luis’s brothers were driving down from New Jersey for the wedding. They were already in South Carolina before they knew the wedding had been called off,” tweeted TLC. 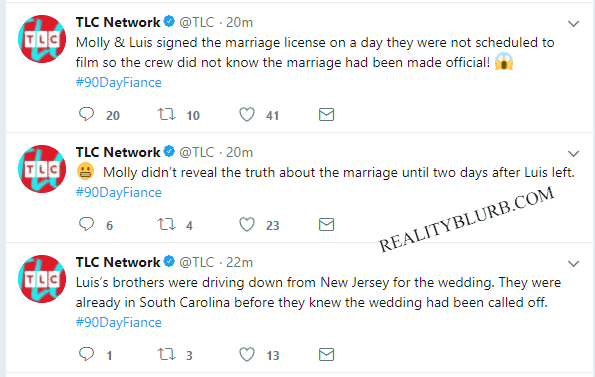 Finally, TLC also pointed out the fact that this is actually the first wedding to be called off in 5 seasons of the show. And we all know why now — it’s because Luis knows he gets to stay in the country thanks to their legal marital status! #WellPlayedLuis. #YouGotPlayedMolly.

TLC tweeted, “This is the first canceled wedding in 5 seasons of #90DayFiance.”

The question on everyone’s mind now is did Molly and Luis get back together? Feel free to check out our latest update on the couple as Luis shared a post about the status of their relationship moments after tonight’s episode aired!

We should also get answers tomorrow as the finale and tell-all reunion special will air Monday night on TLC at 8/7c.

TELL US – THOUGHTS ON THE LATEST? DO YOU THINK MOLLY & LUIS WILL GET BACK TOGETHER?