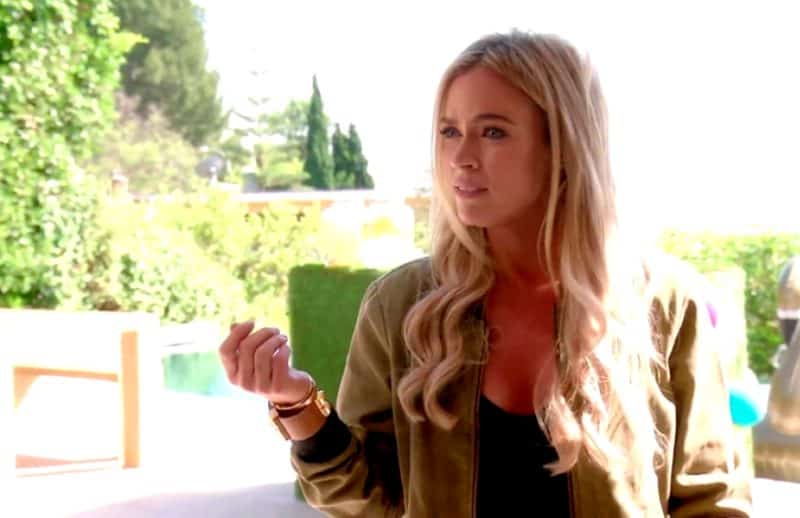 We’re just two episodes into the latest season of the Real Housewives of Beverly Hills and so far newbie Teddi Mellencamp Arroyave seems to be getting a warmer welcome from fans than her castmate Erika Girardi!

Teddi, daughter of John Mellencamp, is addressing that issue in her latest blog as she reveals she felt “dismissed” and shut down by Erika who she describes as ‘not being welcoming’ to newcomers. Teddi, 36, also addresses how she got in shape after once weighing over 200 lbs, plus being frugal despite having a wealthy father.

“And we’re back in Vegas.

First, a lot of you have been asking about my accountability coaching, so I’m glad I get to talk about about that a bit in this episode (no matter how seriously some of the women may take it). My weight has fluctuated my entire life, and when I gave birth to my son Cruz, I was over 200lbs. I was thrilled to have a healthy baby boy but didn’t feel right in my own skin. I knew then that in order to be the best wife, mother and version of myself that things needed to change. I would hold myself accountable to my vulnerabilities and insecurities in a positive way— and that’s when I felt a shift; I was truly loving myself again. I knew that there were women everywhere who were going through these same emotions and I wanted to help them. Help them discover that same power to become their best selves— to wake up every day and be able to love yourself. I’m blessed that my passion has become such a thriving business that empowers women across the country.

That said, I totally hold myself accountable for being a frugal b*tch. Look, I know it sounds ludicrous given who my dad is, but I wasn’t handed a platinum card and shipped to Los Angeles to live the golden life. I struggled as an assistant at an agency and worked my a** off. I will never be that person who blows five thousand dollars at the casino just because I have it…

As I mentioned in my last blog, I like to observe new people before really diving in, especially a group like these women with so much history and drama. It’s not really my place to comment on what happened in the past because, honestly, what the hell do I know? So on the High Roller, I just watched and took notes. Because I’m definitely gonna need them.

The nightclub and the pool were great opportunities to get to know the women better. I could feel genuine friendships and connections were forming and was excited about it. But with Erika, I felt like I was trying too hard without much reciprocation. I know Lisa Vanderpump and Dorit “warned” me about Erika, but I truly wanted to make my own assessment. There are times during our trip when I felt dismissed or that my business was being mocked. But I chalked that up to being the new girl and tried to get my insecurities in check. So when you finally see me try to engage in a meaningful discussion with Erika, whose situation with her father I have true compassion for and merely wanted to open a dialogue between us, I’m not surprised she shuts me down. We see, from Lisa Vanderpump’s relaying of Erika’s text habits to my conversation with Dorit the next morning that Erika isn’t the most welcoming to newcomers, that I should’t be too offended. Maybe it was a bad day, maybe she just needs more time to thaw. At this point, I’l pull back a bit but I won’t judge her solely on this interaction. Besides, she calls herself out as the “asshole” in the situation— which I like to call “taking accountability.

For more on my accountability coaching, please check out my website: laworkoutjunkie.com”

TELL US – THOUGHTS ON TEDDI’S BLOG? DO YOU LIKE HER SO FAR?