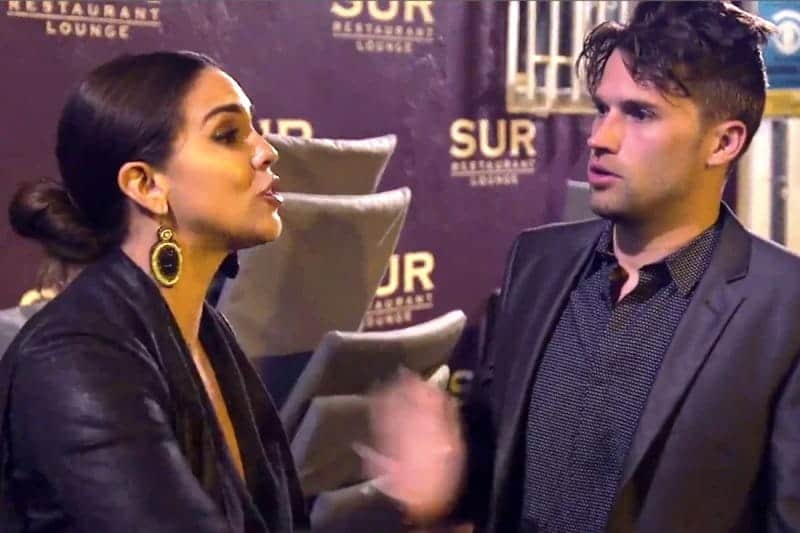 The Vanderpump Rules episode begins with the hardworking girls from the Vanderpump team opening their eyes and stretching their legs…at 12:07 pm. Ah, to live their life! The night before, they decided to bring the party back to Jax and Brittany’s apartment, juuuuust in case Jax decided to come home after being told to stay away. The Taco Bell gets delivered and they continue to gossip over LaLa and her private jet and her secret boyfriend. The only one sticking up for LaLa is Scheana cuz LaLa invited her to Vegas via private jet. I’d stick up for her, too. Duh!

According to Tom and Tom, aka TomTom, Eminem “Lose Yourself” is evidently the new pump up song for 2018. The guys roll up to Lisa’s palace, ready to seal the deal and get the party started on their restaurateur venture. Schwartzie admits that he is definitely-maybe still intoxicated from the previous night. That’s totally the way to win Lisa’s heart back. Lisa is worried that all these two are going to bring to the restaurant is “a load of negativity.”

Sadly, $120,000 is too much money for the Toms to come up with…it’s “crippling” to Sandoval and all he can think about is there goes all of his hair product and clothing. #priorities. Lisa retorts, “You’re either in or you’re out.” In the words of Schwartzie, this is like an episode of Shark Tank …….or Project Runway. In the end, 5% each gets the dudes a partnership in TomTom. It’s official ya’ll!

Meanwhile, Jax enters the apartment he shares with Brittany as the girls are crushing quesadillas and Doritos Locos tacos. Jax loses his cool immediately because he cannot believe what a mess the house is in. I think he’s secretly annoyed no one offered him a cheesy gordita crunch wrap supreme, but he instead lashes out at Brittany stating, “You are not THAT devastated.” Brittany proceeds to lose her cool and begins smacking the heck out of Jax. Jax flips out at “Divorco Scheana” and Stassi because he doesn’t like that Brittany goes crazy after hanging out with the girls. He kinda has a point. I mean, they WERE sleeping together just the night before???

These days, Jax is referred to as “f*ck face” and although it is a bit vulgar, I have to admit, it does fit him nicely. Way to go, Scheana. Speaking of Scheana, she is busy packing for her Vegas trip with LaLa (private jet status). Ariana is there to …help her pack??… and LaLa comes over, too. Have I mentioned how much I have missed LaLa?! I mean, who else can come up with these one liners like, “If you’re not ugly and you have t*ts, you’re gonna be able to go on a private jet?” AHHHHHmazing.

LaLa shares with the girls that she is coming back to hostess, but that Katie better watch her back. LaLa is not into the fact that Katie keeps saying her boo is married. “Katie made a comment about my man?” LaLa is confused and ANGRY. “Is she trying to get popped?” I can’t with this girl. She also gets so heated that she drops a bombshell about Schwartzie. Tit for tat. You hurt me, I hurt you. Seems logical….if you’re four. LaLa shares that her friend Allie made out with Schwartzie, after Katie and Tom were married. Oooph.

Stassi has 6 hours to set up Guillermo’s birthday party, which should be a breeze considering Stassi has never planned an event ever in her life. No biggie. Lisa hands over her “limitless” credit card so Stassi can go ahead and get what is needed for the party at Sur. God, I would love just a DAY to be LVP.

Jax and Schwartzie have a nice little lunch date and it seems to me this cast just LOVES Mexican food. Taco Bell. Fried guacamole. I am sensing a theme here. Jax continues to complain about his apartment and Schwartz gives him relationship advice. Yea, you know the guy who has “supposedly” cheated on his wife. You should TOTALLY listen to him. He also suggests a “don’t ask, don’t tell policy” to Jax. Gross.

“Turns out this event planning thing is kind of….hard,” –Stassi Schroeder. OF COURSE IT IS HARD. You haven’t worked a DAY in your life. I kind of enjoy watching her squirm. She obviously pulls it off in the end. LVP seems impressed with Stassi’s party-planning, so I have a feeling there will be more Schroeder parties in the future. While the rest of the gang are at Guillermo’s party, Jax and James (odd buddies) throw back shots of absinthe.

I’d much rather be at Guillermo’s…because that’s where the real drama lives. This time, Ariana serves as the messenger of the drama. She takes Schwartz out back and lets him know that a rumor is brewing: Schwartz made out with someone in January or February while Katie was in New York. Ah…Schwartzie has a case of amnesia again. Someone needs a new excuse…and a new brain. “I am baffled. I have no recollection whatsoever of this.” What a hot mess express.

Like two high school girls, James and Jax take selfies and write “something funny” as their caption to try and get the Guillermo party goers jealous since they’ve been taking shots of absinthe. I bet they can’t even spell absinthe. They continue to rip these potent shots, especially after realizing that it’s a hallucinogenic alcohol. Jax shares that Brittany is “hate-f**king” him. Basically, same story, different day.

Katie decides SHE needs to talk to Ariana, but Schwartzie steps in to TRY and alleviate the situation. In the last nine months, he apparently hooked up with another girl. Meaning, not his wife. He continues to repeat that he has “no recollection” of this. Ariana tries to smooth things over with the girls of Sur. Once they find out the rumor comes from LaLa, Katie is even more fired up. Schwartzie chuckles it off and thinks because he doesn’t remember it happening, then it’s all good. He tells Katie to, “Have some perspective.” That’s not the right thing to say to an angry woman.

OF COURSE LVP overhears this conversation and her face says it all. She confronts Schwartz and she is equally as annoyed as Katie being that SHE married these two trolls! LVP, get out of this TomTom deal now. You cannot work with a man who has amnesia!! Maybe you shouldn’t tell your business partner that you just “get so drunk” you don’t remember. Bad idea, dude. Lisa tries her best to console a crying Katie, but nothing can fix this.

TELL US – WHAT ARE YOUR THOUGHTS ON THE VANDERPUMP RULE RECAP & LATEST EPISODE?