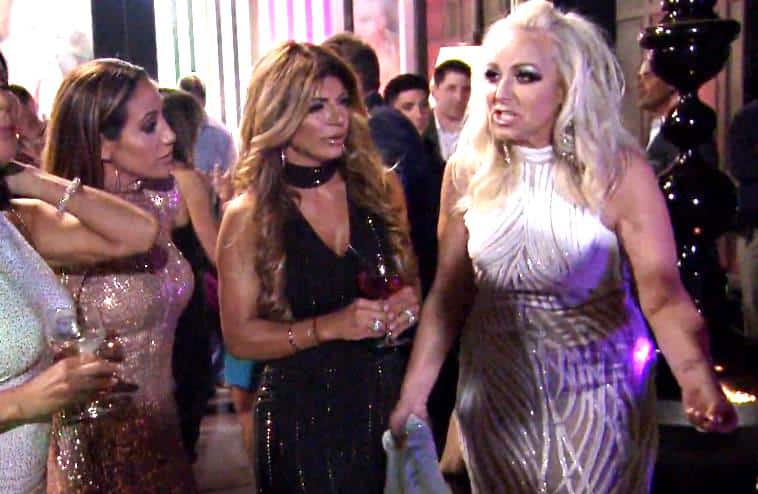 Well, another season of The Real Housewives of New Jersey came to a close in last night’s finale.

The finale is generally one of the most drama packed shows of the season. Petty squabbles come to a head, accusations fly, and loyalties shift. Season 8 certainly ended  with plenty of drama, but it was also…odd.

Teresa finally visited her husband, Joe, in prison after nearly eight months. And while she has repeatedly insisted that her busy schedule was to blame for the long stretch between visits, but her friends and family don’t really seem to be buying it.

Teresa has been uncharacteristically forthcoming this season about her marriage, which wasn’t exactly a bed of roses BEFORE she served almost a year in prison for her (supposedly) unwitting role in her husband’s crimes. In the past, Teresa turned a blind eye toward rumors of Joe’s infidelity, and was always quick to excuse his other behavior. But no more.

Even more telling was the fact that after all this time, only Teresa’s two youngest daughters joined her for the visit. The older girls opted to stay behind for soccer and cheerleading. Teresa has been adamant that Joe needs to apologize, and take responsibility for the effect his actions have had on her and their daughters. She left for the visit hopeful, but nervous about seeing him.

The cameras weren’t allowed inside the prison,  but Teresa said that when she saw Joe, she sort of melted, and had gotten choked up and emotional, and hadn’t confronted him.  As I said, it’s typical for Teresa to go easy on her husband, but the odd part came when she told a completely different story to Melissa and Joe Gorga, when they asked about the visit.

Teresa told them that Joe had cried and hugged her, and apologized profusely. She was also sure to mention past apologies she’d received via email and text, despite having said many times that he’d never apologized. Teresa told her brother and sister-in-law that she just needed to hear him actually say it out loud, and that “everybody makes mistakes”. Well, that’s putting it mildly!

Joe Gorga was certainly skeptical. The brothers-in-law grew up together, and this depiction of  tearful contrition and letter writing didn’t quite jibe with the blustery, old school, tough guy he’s come to know and (sort of) love. But Joe also knows his sister, so he wisely kept his doubts to himself.

It was definitely an awkward exchange, but it was nothing compared to what went down at Margaret’s big, fabulous “Studio 54” themed 50th birthday party.

All of the ladies were invited, but after Siggy rudely snubbed Margaret, and refused to even meet her mother, at the grand opening of Gorga’s restaurant, there was some question about whether Siggy would show up. Margaret has genuinely tried to forge a friendship with Siggy, who refuses to act like anything other than a middle school mean girl.

To say the two women have had their share of miscommunications is an understatement. Margaret has a snarky, teasing sense of humor, and it rubs overly sensitive Soggy…oops, I mean Siggy, the wrong way. Their constant arguing took a particularly nasty turn, after Siggy accused Margaret of being an anti-Semite, following an analogy Margaret made between Hitler and Kim D.

Now, this was insensitive to be sure. Invoking Hitler’s name just to make a point is just something you don’t do, particularly to a self described “super Jew”, and daughter of a Holocaust survivor, like Siggy Flicker. But an anti-Semite?! Even Siggy’s father felt  that was a little harsh.

But Siggy’s real problem with Margaret seems to be the close friendships she’s formed with Teresa and Melissa. How dare Margaret become friends with the women Siggy introduced her to! See?! Middle school. As the party, complete with horse statues and a disco ball graveyard, got underway, Siggy was no where to be found.

The ladies weren’t all that surprised. After all, why would anyone in their right mind show up to a party hosted by someone they didn’t even speak to the last time they saw them? But Siggy may not be in her right mind, because she had every intention of going…probably.

Eventually, all of the ladies (except for Margaret) started receiving texts from Siggy saying that she had taken a nasty fall down the stairs at her home, and gone to the emergency room. Now, I know what you must be thinking. What are the odds of falling and hurting yourself, just before you leave for a party you admittedly don’t want to attend, for a person you admittedly don’t like? And everyone knows that once you say you’re hurt, people stop asking questions, right?

Well, that depends on the people. Of course Dolores, Siggy’s biggest cheerleader and defender, believed her right away.

Teresa also doubted that Siggy would lie to get out of the party, and even had the photographic evidence on her phone. Siggy had posted a photo of herself and her husband, Michael Campanella, and it certainly looked like the couple were on their way to the party.

Melissa was doubtful about Siggy’s injuries, and while she didn’t mention it to the other ladies, she did have a private chat about it with her husband, Joe, and he agreed it sounded fishy.

Danielle, on the other hand, had no problem loudly calling BS on Siggy’s excuse, saying it was just more of the deflection and attention seeking they’d all come to expect from Siggy. She had a point. Dolores immediately jumped to Siggy’s defense, and told Danielle that she was “sloppy”, and that she was going to let Siggy know what Danielle was saying about her.

And it turns out that Siggy really DID fall and go to the hospital. She was in a real life sling, with a real life boot on her ankle, and when she got Dolores’ text, she announced to her husband that they would be making a detour..to Margaret’s party. Siggy’s husband thought this was crazy, of course, but Siggy was adamant that “nobody talks about Siggy Flicker, and so off they went.

Before she even got inside, Siggy announced that she just wanted “to steal” Dolores, Melissa, and Teresa for a few minutes, so they could talk. She didn’t even mention talking to Margaret. Once she hobbled inside, hamming it up for full dramatic effect, everyone came rushing over to ooh and ahh over her injuries.

Siggy said she knew that some of them had been talking about her, and doubted her fall. Melissa boldly confirmed that she had had her doubts, and jokingly said that she didn’t really think  Siggy had lied, but that maybe she’d purposely thrown herself down the stairs to avoid coming.

Siggy laughed, and said that she loved herself far too much to do such a thing, and on that point Melissa had to agree. Siggy IS pretty enamored with herself, although Melissa reflected that the fact that such a thing had crossed her mind at all, said everything.

Margaret was certainly surprised to see Siggy after her traumatic evening, and politely expressed concern over her injuries. But then Siggy came right out and admitted that she had been dreading coming to the party, and was only planning to do so because her friends Teresa, Melissa and Dolores would be there.

Margaret said she was surprised to hear that after Siggy had accepted the invitation so enthusiastically just a couple of weeks before. Siggy told Margaret she shouldn’t be surprised because she had never said she wanted to be friends, and still didn’t.

The others were shocked at Siggy’s rudeness. I mean, this is a woman who calls herself classy, and compassionate, right? And now she was once again being unforgivable rude to Margaret…and in her own home, to boot!

Margaret had no choice but to suggest that Siggy just “get the f*** out”! Siggy said she was more than happy to, and believed that her “true friends” would leave with her. Margaret said she doubted they would leave her party, but Dolores announced she was going to leave, and Teresa said she was just going to walk Siggy out and come back…but she never did.

Once the ladies were outside, Teresa told Siggy that she’d been really rude to Margaret, but also said that since she had known Siggy longer, and she’d been so supportive, her loyalty was to her. The three women left the party without another word.

Once the others realized that Teresa had left with Siggy, they were shocked. Especially Margaret.

After all, hadn’t Margaret had Teresa’s back in her fight with Kim D., whom Margaret had never even met?! And hadn’t they bonded that weekend in Boca, when Margaret planned a wreath ceremony in honor of Teresa’s mother, whom she’d also never met?! Didn’t all of that mean ANYTHING to Teresa?!

The short answer to that was no, apparently. Margaret was hurt, offended, and said that Teresa better have a damned good excuse for walking out without so much as a goodbye.

Melissa and Danielle were also shocked and confused. They hadn’t expected Teresa to leave, and certainly didn’t expect to now be on the opposite side of this big blow up. The group was divided yet again. And no one seemed quite sure where anyone stood.

But we’ll find out soon enough, because the only thing that packs more drama than a RHONJ season finale is an RHONJ REUNION. And the first installment airs next week. Stay tuned!

TELL US – WHAT ARE YOUR THOUGHTS ON THE RHONJ RECAP & FINALE EPISODE?