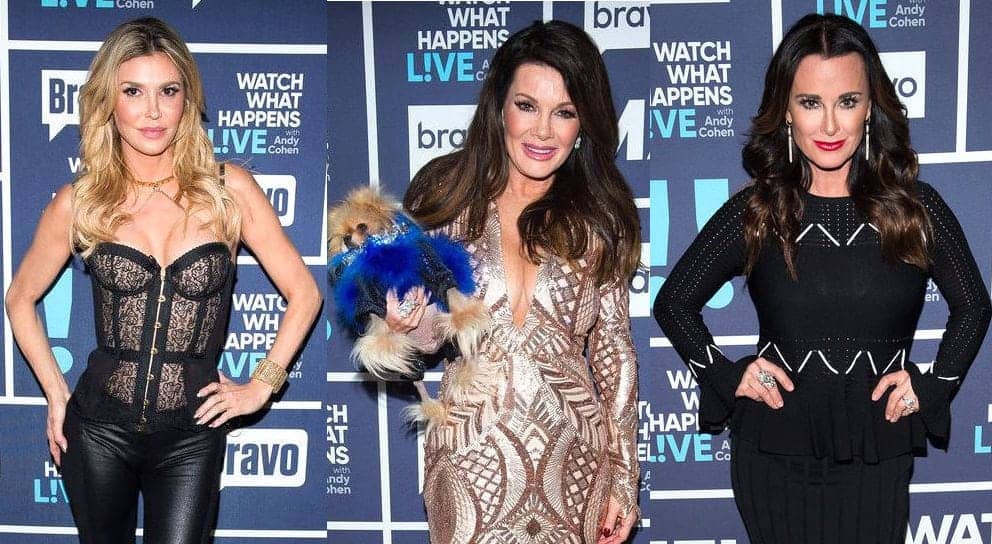 Brandi Glanville can be best described as the gift that keeps on giving or perhaps that pesky house-guest that simply refuses to go away!

Either way, the always outspoken former Real Housewives of Beverly Hills star did a recent podcast interview during which she didn’t hold back when it came to the show and her former castmates. Brandi had a lot to say about her former friend Lisa Vanderpump as she called her “manipulative and strategic.”  She then described Kyle Richards as essentially being fake in front of cameras, and also claimed Kyle and Lisa actually don’t like each in other in real life! Wowzers.

When it came to the RHOBH, she called this season boring (she has a point no?!) and revealed why she can relate to Lisa Rinna.

On the RHOBH Being Boring –

I think women of Beverly Hills are the least real. Because I’ve seen these girls when the cameras shut down and there’s some drama. Like they are so together when the cameras are on, and everything is pristine and perfect. And it feels like you’re watching middle aged barbies. Robot barbies… It’s the beginning and I hope it gets more exciting. I mean you have to build up to it…Somebody has to be [the villain]. Like you can’t all just be PC all the time and like being best friends because no one wants to watch that.

I would say Kyle. I think she’s a lot looser and a lot more fun, and not so worried about saying the right thing and doing the right thing, and worrying about her kids hearing something. Because when there’s no cameras and it’s just you and her, she can do whatever she wants and there’s no repercussion. It’s weird because I like Kyle off camera, not on camera because they are two different people.

On Whether She Thinks Lisa Vanderpump Is Manipulative –

The show is her life. Her kids are grown so Vanderpump Rules and Real Housewives, that is her life. She’s very concerned about how she comes off. When you say manipulative, like yes she is strategic and manipulative. She plans her jokes out, let’s just be clear they don’t roll off her tongue. She’ll call you in the morning and she’s like ‘listen, let’s go over what happened, and I’m not telling you to do this but wouldn’t it be fun if you did this’.  And she reminds you over and over again that the only reason you’re on this show is because she’s allowing you to be. So that was my experience with her… And if you go against her, you’re not on the show, hello it happened to me.

[Lisa] does not like Kyle. I know this for a fact. And Kyle doesn’t like her. [Lisa] is like ‘the audience wants to see us together’. That bothers me because we’re not acting. You don’t like her, just say you don’t like her. They have this struggle of who is the top favorite Queen B. And guess what? It’s Erika guys, sorry to tell both of you.

On Being Able To Relate To Lisa Rinna –

I just ran into Lisa Rinna at a Christmas party and [she was] lovely to me. At the end of the day, I feel sorry for her because she’s had to be the bad guy for a couple of seasons in a row. And I know what that feels like. And it sucks because she’s the only one bringing the show, and then she’s still hated as a bad guy. And I feel for her because I’ve been there. And she was really sweet and kind.

On Why RHOBH Needs To Be More Like RHOA –

I love Atlanta because they have money, but real s**t is happening. People are going to jail. People are like literally suing other people. Not that I like people that sue. But they have money, but there’s real drama happening behind the facade of ‘let’s get our nails done. Let’s go on a trip.’  When they go on a trip, they’re throwing down. People are getting their weaves pulled out. Like it’s a mess. You will never see that on Beverly Hills. Never.

TELL US – THOUGHTS ON BRANDI’S INTERVIEW? DO YOU AGREE OR DISAGREE WITH HER?