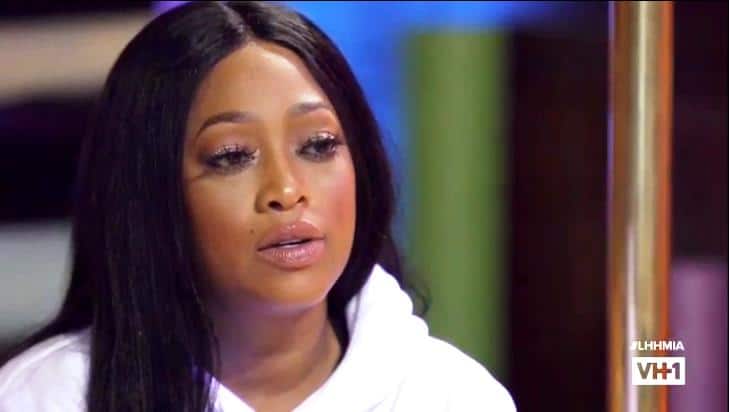 Why is everybody  on Love and Hip Hop Miami so mad?! I mean, they live in Miami, for crying out loud! They have exciting, glamorous careers. Some of them probably even know Beyoncé! But I guess nothing’s good enough for some people.

Seriously, this has to be the angriest cast on all of reality television. And on last night’s episode everybody went off on somebody about something.

First we saw Shay and Scrappy. When we left off with them, Shay had just confronted Scrappy about working with Chinese Kitty. That sounds horribly racist, I know, so I must clarify that this is what she calls herself. And as off putting as it is, it’s not at all surprising when you realize that her mother is a woman called Chinese Nikki. Sorry, I’ve been needing to get that off my chest.

Anyway, Chinese Kitty and Shay got into scuffle a few weeks back, after Shay confronted Chinese Kitty’s friend, Gabby, and things got physical. In an effort to protect her friend, Chinese Kitty and her mother had jumped into the fray, and the whole thing turned into a drink throwing, weave pulling mess.

To her credit, Shay met with the mother/daughter duo, and explained that what happened hadn’t been personal, and it seemed like it would all be squashed…until Chinese Kitty mentioned her work with Scrappy.

Scrappy and Shay go way back. They were in a relationship for years when they’d both lived in Atlanta, and the circumstances of their tumultuous breakup left Shay distrustful, and well… bitter. But now that they’re both in Miami, they’ve been trying give it another go.

Shay warned Chinese Kitty to stay away from Scrappy but she’d refused. When Shay gave Scrappy an ultimatum, he’d refused to stop working with her, as well. Both said it was just a business relationship, but Shay wasn’t buying it, and vowed to be done with Scrappy for good.

Scrappy wasn’t ready to let Shay go just yet. But while talking to their mutual friend, Blue, he found out that Shay had recently ended a relationship with Blue’s band mate, Pleasure P. And it wasn’t just some casual dalliance, either. Shay had moved to Miami specifically to be with him. Needless to say, this revelation did not make Scrappy happy.

Blue suggested that Scrappy show up at Shay’s fitness boot camp event, and try to work things out. This led to yet another argument between the two.

Shay reiterated her feelings about Scrappy working with Chinese Kitty, and told him that he was disloyal, and hadn’t changed a bit during their time apart.

When Scrappy mentioned Shay’s relationship with Pleasure P, and asked why she hadn’t told him about it, Shay said that she’d been as honest as she’d needed to be at the time. Scrappy had asked if she was seeing anyone, and she’d said no, which was true. And why should she have told him all of her  business anyway, when  she’d known all along that he would just let her down…again?

Blue tried to help settle the argument, telling them that they were only angry with each other because they loved each other, and they should just hug it out, and stop all the fussing. But when Shay asked Scrappy if he was still going to work with Chinese Kitty, he hesitated, and one look in his eyes told her all she needed to know, and she stomped off without another word.

Next up was Trina, and her cousin Bobby Lyte. These two may be family, but Trina keeps her distance from Bobby because he’s always getting drunk, and making a big scene.

Bobby has been trying to get his big break in the music industry (no easy feat for a gay rapper), and to that end Trina’s partner, Trick Daddy and her friend, Miami Tip, took Bobby to meet with Super Cindy, who had agreed to play his new single on her podcast.

Everyone loved Bobby’s song, and while Super Cindy was interviewing him, she asked about his famous cousin, and if she was helping him find his way in the Hip Hop world.

Now it would have been so easy for Bobby to say something diplomatic, like, ‘I prefer to make my own way, but appreciate her support’, or something like that. But that’s just not Bobby.

Instead, Bobby went off, and said that Trina was selfish, and never supported him, at all, because “she wanted to be the only famous person in the family”. Tip tried to stop Bobby from bashing his cousin publicly, but by then he was on a roll and couldn’t be stopped.

After the interview, Bobby asked why Tip was defending Trina so vehemently. After all, she knew that Trina hadn’t supported or helped him in any way. Tip explained that Trina had always been loyal to her, and had given her a break, even when no one else had taken Tip seriously.

Tip loves Bobby, and was really trying to help him, so she got Trina’s other cousin, Joy to convince her to come to Bobby’s single release party, and show him some much needed support. Trina reluctantly agreed.

Tip also paid a visit to Bobby’s ex boyfriend, Jeffrey, and asked him to come to the party. He  was just  as reluctant as Trina.

His relationship with Bobby had ended badly, and when Bobby ran into Jeffrey with his new boyfriend, Malik, they’d had a vicious argument that ended with Bobby smacking Jeffrey in the face…hard! Like, Jeffrey flat on his back in the bushes, hard. The exes hadn’t spoken since, but Jeffrey ultimately agreed to go to Bobby’s party.

Bobby’s  party went well for the first 20 minutes, or so. His performance went off without a hitch, and everyone was genuinely impressed, even Trina. She was just beginning to think that maybe she’d been too hard on her cousin, when she ran into Super Cindy, who was more than happy to give Trina a play by play of her interview with Bobby. Uh oh!

When Trina found Bobby, she read him up one side and down the other, telling him that he better never think of speaking about her publicly again, and that this type of “extra” behavior was precisely why they would never be close, and then she stormed out of the club .

Bobby’s spirits lifted right away when he saw Jeffrey. It was clear that Bobby was hoping to get back together with Jeffrey, but he firmly but politely told Bobby that he’d only come to show his support , and was very happy in his new relationship with Malik.

But perhaps Jeffrey should have told Malik about his plans before Malik saw pictures of Jeffrey at the party online, because when Jeffrey got back to Malik’s place that night, he found his things had been thrown outside!

Jeffrey tried to explain that his intentions had been pure, and that he had no interest in Bobby, aside from showing up to support his music, but Malik was unmoved.

Malik told Jeffrey to just go be with Bobby because he wasn’t down for playing any games. This isn’t Malik and Jeffrey’s first go round. They dated in the past, but Malik had an in the closet, and Jeffrey had refused to be live his life in secrecy.

This time Malik made a real commitment to the relationship, and made the difficult decision to come out to his friends and associates, and he felt that Jeffrey had disrespected his sacrifice.

The fight between Jeffrey and Malik got pretty heated, and Jeffrey refused to stand there being screamed and cursed at, so he stormed out.

So much door slamming, so much yelling…can’t they all just get along? Go to the beach, have a drink with an umbrella, and chill the hell out, people, it’s not that serious.

Well, that’s probably not going to happen. Next week is the season finale, and spoiler alert….everyone’s gonna get mad! Stay tuned!