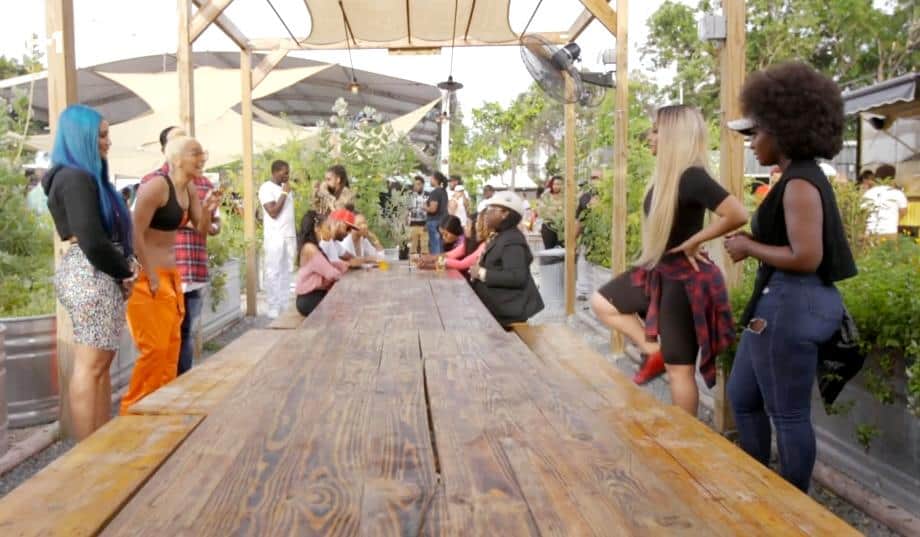 It’s a chicken and egg thing. We many never really know the answer. Suffice to say, it happened more than once.

It all went down at Trick Daddy and Trina’s Backyard Barbecue Bash, a free concert to promote the duo’s new album. It probably would have been a really nice event….if only their cast mates hadn’t been there.

First, there was Veronica and Amara. These two have been at odds over producer, Young Hollywood, all season. Both women wanted to work with him, but after he’d suggested Amara change her signature Afro to a style that was more “mainstream”, she became outraged, and not only refused to work with him, herself, but insisted that  her friends stop associating with him, as well.

It was completely unfair and selfish. Who is Amara to tell someone who they can work with? And all because he’d SUGGESTED that she change her hair?! He wasn’t going to tie her down, and forcibly straighten it.

But still, Amara wanted to be keep it “real”, and most women can appreciate that, even Veronica. Until Amara did a 180, and decided to work with Young Hollywood, after all, and even showed up to an industry event on his arm.

Victoria had been understandably upset. I mean, after all that fussing and grandstanding about women sticking together, and she just changed her mind?! And the truly crazy part was that Amara seemed surprised that Victoria was angry.

Victoria had confronted Amara right away, saying that she was fake…all the down to her hair. Yes! All that soapbox standing was over a wig, and Victoria outed her. The two women had argued viciously, and ultimately bodyguards had to pull them apart before things truly got ugly.

Young Hollywood apparently placed all the blame for the scuffle on Amara, and decided he was team Veronica. On the way to the barbecue, Young told her that he’d never work with Amara again after her ghetto behavior at the party.

In the meantime, Amara was filling  JoJo in on the details of the scuffle, telling her that Victoria had implied that having an Afro was a bad thing. She didn’t. But Amara clearly has VERY deep feelings about that wig.

When Victoria saw Amara and JoJo, she called them ratchet, raggedy, and everything else under the sun, before attempting to hop across a picnic table to take them BOTH out!

Once again, Young Hollywood, and some bodyguards, who seemed to appear out of nowhere, pulled the women apart, as they screamed, cursed, and struggled to claw each other’s eyes out. It was mess!

But apparently, Young Hollywood had no problem with Victoria’s ghetto, public behavior, because he simply laughed, and put his arm around Victoria, as he ushered her away. Wow…that is some wig!

Now, if people were going to be jumping over picnic tables, Shay certainly wasn’t going to be left out! She lives for that kind of thing.

And when she saw Joy sitting next to her ex boyfriend, Pleasure P, she took the opportunity to pounce.  She’d been angry with Joy for weeks because Joy had told P that Shay had been seeing her OTHER ex boyfriend, Scrappy.

Joy tried to diffuse the situation, and said that P was her friend, and she’d felt he had a right to know Shay was seeing Scrappy. Of course, Shay is no longer seeing Scrappy or P, so I’m not exactly sure why any of it mattered.

But Shay was looking for a fight, so she tried to lunge across the table to get her hands on Joy. Joy’s one of the classier cast members, but she wasn’t just going to sit back, and be attacked, so she lunged back at her.

P got between the women, and tried to protect Joy, who he is clearly smitten with, and once again, bodyguards manifested out of thin air, and saved the women from each other.

But this beef isn’t over by a long shot! Shay left the barbecue vowing to make sure that Joy’s ex husband, Trick Daddy, found out just how cozy she’s been getting with  P, and it’s sure to get ugly.

Joy and Trick have filed for divorce, and Trick even threw a party to celebrate it, but after realizing that Joy is happily moving on, he decided to put a halt to the divorce, and try to win Joy back. It’s all a little stalker-ish, to be honest, but Joy’s moving on whether Trick likes it, or not.

Bobby Lytes showed up at the barbecue too, and where he goes, trouble tends to follow. He managed to hold it together for a little while, and even smoothed things over with his cousin, Trina. But then he saw his ex boyfriend, Jeffrey, and his new bae, Malik, and things went downhill fast!

Bobby is feisty, and still has a thing for Jeffrey, so, of course he was elated to discover that Jeffrey had left Malik home waiting, while he attended Bobby’s single release party.

This had lead to a nasty argument between Jeffrey and Malik, and almost broke them up for good. And now that they’d finally worked things out, Malik wanted to let Bobby know that he wouldn’t be coming between them again.

Bobby and Malik argued, and traded insults, until they started lunging at each other, forcing the bodyguards to intervene once more. Sheesh! You cant take these people anywhere.

The finale did have one bright spot, however. Gun Play decided to enter into rehab to get help with his drug addiction, and Keyara was right by his side. We wish him all the best!

Well, viewers, that’s a wrap on the first season of Love and Hip Hop Miami. Oh, what a time we had! But the drama’s not quite over yet. The cast will be together next week to rehash it all at the reunion. Let’s just hope those bodyguards stay on their toes!