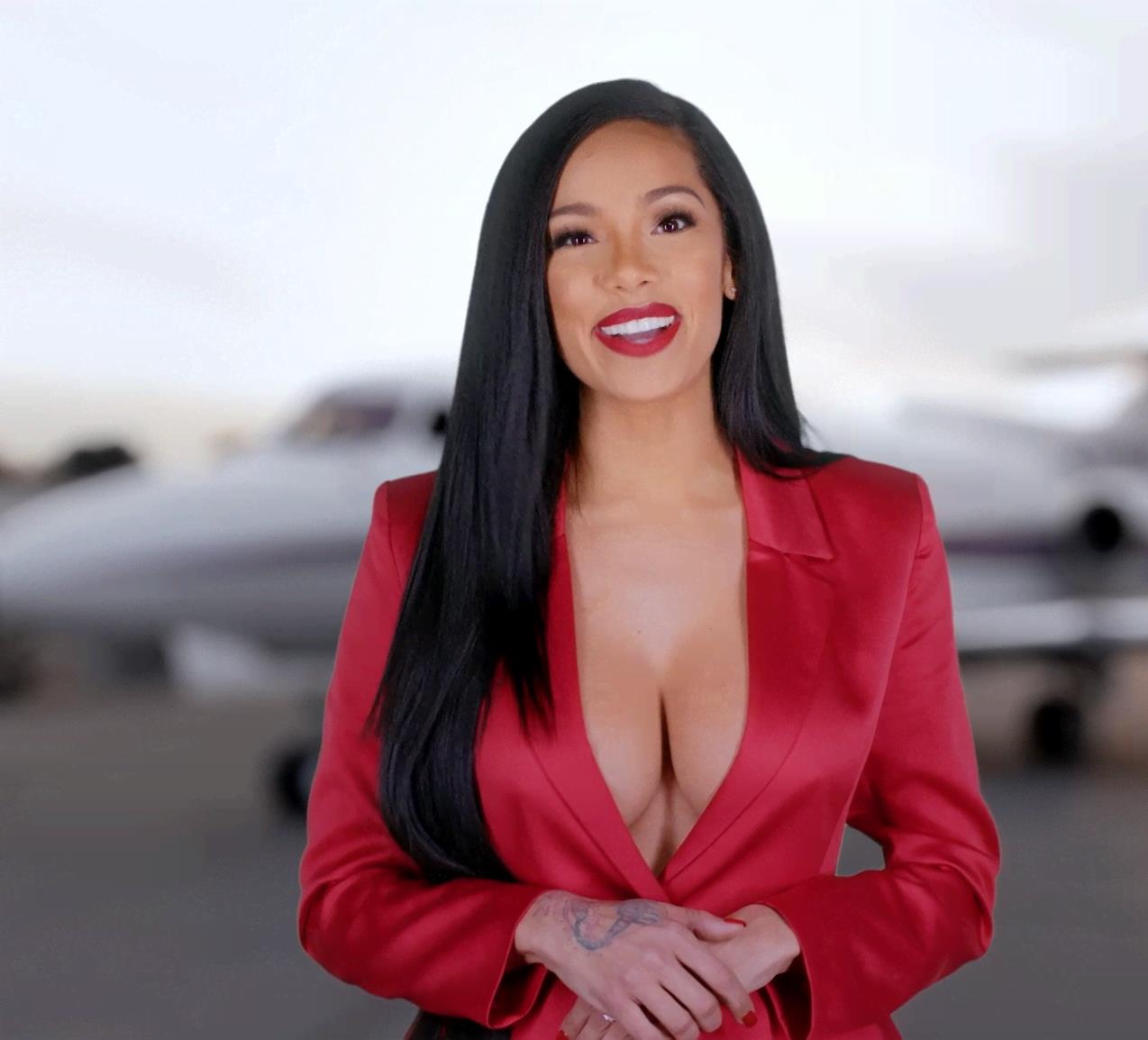 Well, Love and Hip Hop Atlanta is NOT most reality shows, and in last night’s season 7 premiere, they dove in head first!

The big cliff hanger  last season involved the perilous state of Rasheeda and Kirk’s marriage. It was revealed that Kirk had not only been unfaithful to his wife with a young woman named Jasmine, but may also be the father of the woman’s infant son.

Rasheeda had been devastated, but was still, at least, entertaining the idea of working things out. After all, these two have been together for 18 years. They have children, homes, businesses. It wasn’t easy for her to just walk away. Besides, they really loved each other.  But first Rasheeda needed to know whether, or not, her husband was this child’s father. After all, infidelity was one thing, but a living, breathing, daily reminder of it was quite another.

At first, the couple had reason to hope that Kirk wasn’t the father. Let’s just say that he wasn’t Jasmine’s only gentleman caller, and the list of potential fathers was…extensive.  Still, Kirk had hemmed and hawed about getting a DNA test done, and he and Rasheeda separated, and have been living apart ever since.

When we picked up with them last night, Kirk was trying to win Rasheed back and finagle his way back into their family home. But that may never happen, because as Maury would say, he IS the father.

Kirk actually revealed this news to his boys first, and they advised him to tell his wife before someone else did, and wished him God’s speed. And when he went to Rasheeda’s tell her, she took it in stride. After all, she said, she wasn’t exactly surprised by the results, but hearing them out loud, and knowing that there was no way to just forget the whole thing and move on, “was like a punch in the gut”.

Rasheeda calmly, but firmly told Kirk that he absolutely could not move back in with her, and that he’d better start thinking about how he was going to break the news to their children that they had a new baby brother. Wow!

Kirk’s not the only one having trouble juggling women. Stevie J has his eyes on two Latina pop princesses to be the face of his label, Danger Zone, and he’s crossing all sorts of boundaries.

First there’s Estelita, who signed with Stevie more than a year ago, and isn’t at all happy with the way he’s been handling her career. He wasn’t having her record music or perform, and she was getting impatient to become a super star.  Estelita decided to take matters into her own hands, and booked herself to perform at an outdoor festival. It didn’t go well. And unfortunately for her, Stevie was there to see the whole thing.

Truth be told, she’d  sounded awful, and Stevie wasted no time telling her that she still had a lot of work to do before he would be comfortable putting her out there as a performer.

Enter Erica Mena, who’d been Stevie’s first choice all long. He’d only chosen to work with Estelita instead because she was the calmer, more responsible of the two.

Erica only just returned to Atlanta, and after years of bad decisions and bad breakups, she’s sworn off the negativity and drama (for now), and is ready to concentrate on her career. Stevie was thrilled to hear Erica had turned over a new leaf, and immediately called a meeting with her.

Now, Stevie’s a successful producer, and ordinarily, Erica would jump at the chance to work with him, but there was one problem:she and Estelita were once close friends, and although they hadn’t spoken in more than a year, Erica didn’t have any interest in stepping on her toes.

Erica was also concerned about Stevie’s personal intentions with Estelita. Stevie has a history of mixing business with pleasure, and promising fame and fortune to young women with star in their eyes, and no clue that his interest in them is strictly horizontal, and fleeting at that.

When Erica asked Stevie if he’d slept with Estelita, he made an attempt at being coy, but pretty much gave himself away. All the same, Erica agreed to join Estelita’s studio session with Stevie, as long as Estelita wouldn’t feel ambushed or disrespected.

But ambushed is exactly what Estelita felt. She’d hoped that getting into the studio meant that Stevie was finally taking her career seriously, and it was immediately apparent that she had absolutely no idea her ex friend would be joining them.

Erica was mortified. This was exactly what she’d been worried about. She told Stevie to please tell Estelita why she was there. He then turned to Estelita, and announced that Erica was going to be the face of the label.

This was news to Erica. Stevie had said that he’d wanted her to “light a fire” under Estelita, not essentially take her place, and it was clear that Estelita felt utterly betrayed by them both.

Again, sensing that there could be more to Estelita and Stevie’s relationship, Erica asked if they’d slept together.  Stevie admitted this time that they had, but Estelita said she “didn’t recall”. And really, under the circumstances, who could blame her for trying to forget?

Estelita told Erica that she felt she was against her, and that she was hurt because she had once seen Erica as a sister. Erica tried to explain that she still cared for Estellita, but it fell on deaf ears, as she stormed out of the studio.

In the meantime, Tommie was feeling betrayed by her actual sister, Versace. They had always been close. But last year, a squabble between the two turned into a full blown brawl that had resulted in Tommie being charged with assault.

The charges were eventually dropped, but the sisters hadn’t spoken since, and their mother wanted to them to make up and put the past behind them. Tommie could understand where her mother was coming from. She certainly wouldn’t  want her own daughters to be estranged, and she did genuinely miss her sister, so she agreed to a meeting.

Tommie was  fairly tense from the beginning, but got downright angry at  her sister’s easy breezy attitude about the assault charges. It had taken up a lot of Tommie’s time and money, and she simply couldn’t be so nonchalant about it.

When the sisters began to argue, Versace assured Tommie that she hadn’t been the one to call the police, and had even tried to get the charges dropped. But Tommie wasn’t really trying to hear it, and Versace became frustrated and began to walk out. She was just inches from a clean get away when it happened.

Tommie hurled her coffee at Versace with force and accuracy that rivaled any NFL quarterback. Luckily it was a paper cup, because it narrowly missed Versace’s head, and landed against the door with a resounding, frothy splat.

The sisters lunged at each other despite their mother’s pleas, and security guards had to pull them apart, and get Versace to her car, with the two screaming threats at each other. It was actually pretty hilarious, considering that only moments ago Tommie had been so concerned about those assault charges.

But the show ended with an even bolder familial confrontation. Jasmine (yes, Kirk’s side piece) walked right into Rasheeda’s store, Pressed, and introduced herself to Rasheeda’s mother, who was working at the register, and asked to see Rasheeda!

We’ll have to wait until next week to see how this will unfold, but I suspect there won’t end with the ladies going to lunch.

We’re off to a pretty juicy start, but if the previews are any indication, this premiere will seem downright quaint compared to what the rest of the season has in store. Stay tuned!

TELL US – THOUGHTS ON THE LOVE AND HIP HOP ATLANTA SEASON PREMIERE EPISODE?