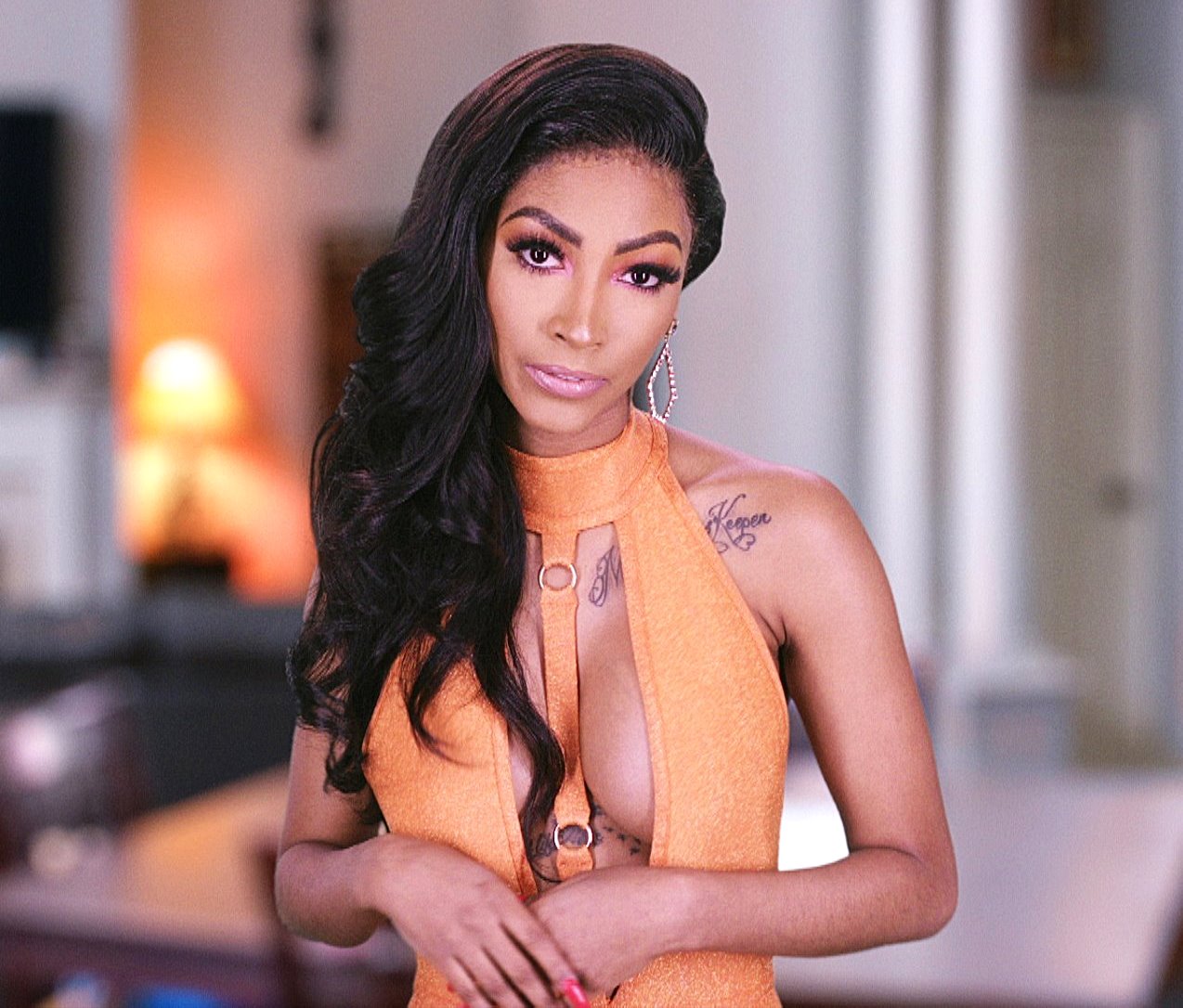 So, apparently the men of Love and Hip Hop Atlanta were having quite the time about 2 years and 9 months ago, and now, what they were doing in the dark is beginning to come to light.

Let’s start with Kirk. Despite being married for 18 years to Rasheeda, whom he calls his soul mate , this fool had a drunken hookup with a stripper named Jasmine, and just last week, it was confirmed that Kirk is the father of her two year old son, Cannon.

Rasheeda is a class act. When she found out, there was no screaming, no throwing things, no scenes. She just told him in no uncertain terms, that he would  not be moving back into the family home with her, and that he needed to figure out how to break the news to his children about their new baby brother.

But Kirk dragged his feet on telling the kids, and his daughter, Kelsie had to hear about it from Jasmine!

Can you imagine?! Jasmine came sashaying into Rasheeda’s store as bold as you please, introduced herself to Kelsie and Rasheeda’s mother, Shirleen, and announced that her son was a bona fide member of their family, and deserved to be acknowledged.

Shirleen told Jasmine that she knew exactly who she was, and asked what she wanted with her daughter. Jasmine explained that now that they knew Kirk was the father, she and Rasheeda needed to talk.

Shirleen told that her that she might relay the message, but she might not. Jasmine and Kirk’s fling had caused her daughter more than enough pain, and whatever nonsense Jasmine was up to, was bound to make things worse.

Needless to say, Rasheeda wasn’t happy when she got wind of the fact that Jasmine had come into the store, and told her mother and step daughter about Cannon before they could hear it from her or Kirk.

Before things could get any worse, Rasheeda called a family meeting so that Kirk could tell the other children about his son, and she could tell him that his “b***h needed to know her place”.

The sentimate was seconded by Kelsie, who, after asking some questions about her new brother, firmly told her father to “get his side chick in check”.

Kirk agreed that he should probably go ahead and talk to Jasmine, and make some arrangements to spend time with his son. So far, they’ve  only been communicating through their attorneys, and as Jasmine told her mother and grandmother, Kirk was missing all of their son’s “firsts”, and she didn’t understand why he wasn’t more involved in his life.

Jasmine’s mother told her that that’s what happened when you had a baby with someone else’s husband, and that her actions had been selfish and inexcusable.  But she also pointed out that Kirk was the one who’d broken his vows, and Rasheeda’s anger should be directed at him, not Jasmine.

But Rasheeda doesn’t actually seem to be all thatangry with Jasmine, and fully accepts that her son is her children’s brother, and will be in their lives. She just doesn’t want anything to do with Jasmine, and who can blame her for that?

Rasheeda wasn’t the only one whose marriage was rocked by infidelity. Sierra recently separated from her husband, Shooter, after finding out that he’d been sleeping with her assistant.

She’s finally moved on, and is happily dating  BK Brasco. She was sitting in her salon telling her friends, Karlie and Tokyo, all about her new boo, when stylist, Shannon, who’d been openly eavesdropping on their conversation, interrupted with some shocking and unwelcome news: Shooter had a two year old child, and one on the way!

Sierra was shocked! Not only was this brand new information, but Shannon had blurted it out in front of other people. It was beyond disrespectful, but  Shannon tried to justify it by saying that when she’d heard Sierra saying that she was finally over Shooter, she’d decided she should  know the truth. Ok, but she couldn’t have pulled her aside, and done it privately?!

But there was another bombshell coming. When Sierra asked Shannon how she knew about Shooter’s child, Shannon said she knew his baby’s mother..because she does her hair…in Sierra’s salon!

Yep! This woman had been a regular in Sierra’s salon all along, and had been telling Shannon all about the affair, and the baby, she was having with Shooter, and Shannon had just carried on doing her hair, and hadn’t  said a word!

Poor Sierra. Talk about adding insult to injury! First her assistant, and now her best stylist, had betrayed her. She immediately fired Shannon, and told her she never wanted to see her again, before storming out of the salon—hopefully to find Shooter, and smack him!

In the  meantime, Erica Mena, new to Atlanta, is busy trying to establish relationships and a career in music, and she’s off to a bit of a shaky start.

On  the career front, she’s just been named the new “face” of Stevie J’s record label, Danger Zone, which sounds fabulous, until you consider that Stevie is generally more interested in getting his female artists in his bedroom than in his studio.

That had certainly been the case with Erica’s former friend, Estelita, who thought SHE was the face of Stevie’s label, until Erica came along, and unwittingly stole the title right out from under her. She accused Erica of double crossing her, and the two women had a vicious argument, much to Stevie’s delight and amusement.

Erica felt awful about it. She knew Estelita had been through a lot in her life..she’d grown up in abject poverty, with 19 siblings, had started stripping to make ends meet at the tender age of 14, and had been a victim of domestic violence and sexual assault. This latest humiliation was certainly the last thing she needed.

But somehow none of that is stopping Erica from working with Stevie. She’s on a “mission” to become a star, and has somehow convinced herself that she’s different from all of Stevie’s other conquests. She isn’t. And I hate say it, but she’s about to get her feelings hurt.

Stevie is a womanizer from way back, and the best way to predict future behavior is past behavior. He literally does the same thing every time: he “discovers” lovely, if not completely interchange women (Stevie definitely has a type), seduces them with  pipe dreams about fame and fortune, sleeps with them until he’s bored, and then throws them over for the next one, often with none of the aforementioned fame and fortune to show for it. And here’s the biggest red flag: not a single one of them can actually sing, or rap, or dance.

But for now, Erica is enjoying herself, and  a welcome to Atlanta party was thrown so she could meet some of the other cast members.

She was particularly taken with Tommie, who just wasn’t feeling the overbearing way that Erica was hitting on her, which included presenting her with a beautiful bracelet. It was all a bit much, and Tommie’s past has made her wary of “crazy Puerto Rican chicks”, so she ducked out of the club without a goodbye.

But there may still be a chance for a little somethin’ somethin’ between these two. Tommie returned the bracelet the next day, and told Erica that she’d be happy to hang out with her casually sometime, provided it didn’t “get weird”. That’s probably asking a lot. Young Joc predicted these two will either end up “feeling each other or killing each other”, and he’s probably right.

Erica also got a chance to talk to Estelita at the party, and the two made amends. Erica swore that she’d never meant to step on Estelita’s toes, and vowed to help her get out of her contract with Stevie. Of course, whether that’s out of genuine concern, or an attempt to protect her own position, remains to be seen.

Stay tuned, viewers, we’re only on episode 2,  the drama is just getting started!

TELL US – WHAT ARE YOUR THOUGHTS ON THE LATEST LHHATL EPISODE?