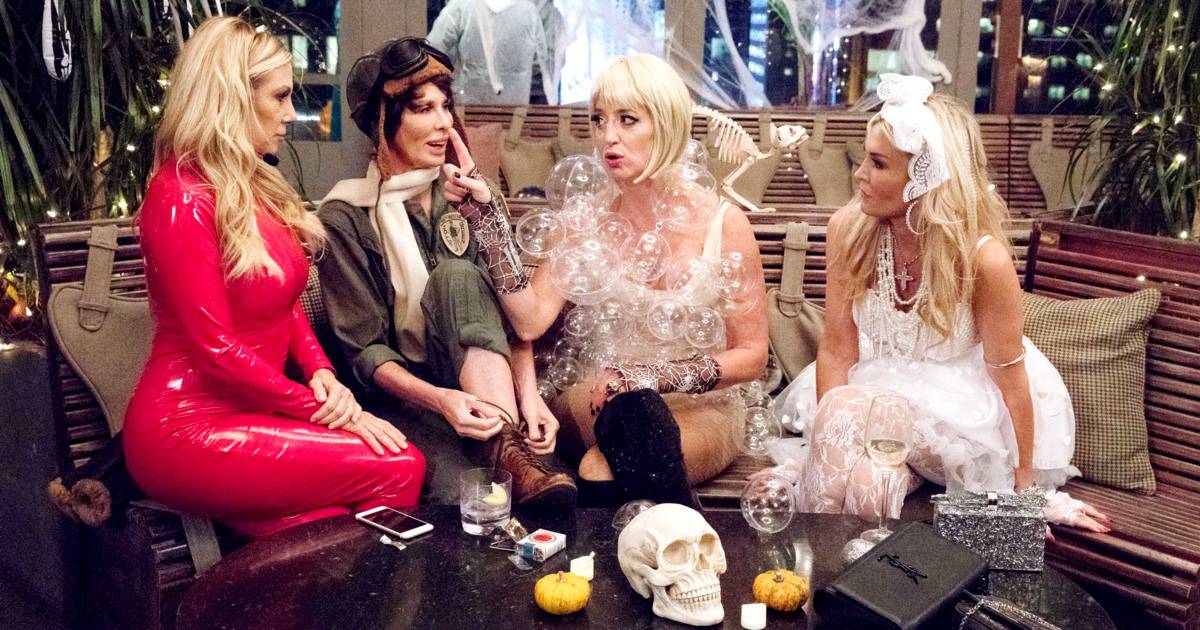 The Real Housewives of New York kicked off their 10th season last night with a divorce, a death..and a Halloween party, because, well, they’re housewives, and petty squabbles, back handed compliments and throwing shade are just more fun when everyone is wearing a ridiculous outfit.

Luanne’s divorce after only 10 months was pretty inevitable. I think even Luanne saw it coming. And how could she not? There were red flags and alarm bells going off all around her.

But she was madly in love with Tom, and their whirlwind love affair had seemed like a dream comeback true, so against her  better judgement, and the constant warnings of her friends, Luanne took a leap of faith, and fell flat on her face.

Tom’s not a bad guy, but marriage just wasn’t his cup of tea. The whole not sleeping with other women part of the deal was difficult for him, and his constant late nights out, and philandering eventually took a toll on Luanne, and she ended the marriage, feeling humiliated and disrespected.

Bethenny also suffered a loss when she had to have her beloved fur baby, and constant companion, Cookie, put down.

Bethenny spent the summer helping with the relief efforts in Puerto Rico, but sadly, was powerless to save the life of  the sweet faced little pooch, who had been with her longer than anyone.

After such sadness, the ladies needed a pick me up, so it was the perfect time for Dorinda to announce that she was throwing a Halloween party.

The ladies went all out with their costumes. There was cleavage for days, WAY too much camel toe for a Wednesday, and even a little black face.

Yes, you read that correctly. Luanne took her costume a little too seriously, channeling a version of Diana Ross I’ve certainly never seen, complete with a giant Afro wig, and a suspiciously deep tan.

For the record, Luanne swore her darker skin tone was due to her usual “bronzer”, and that she was simply “paying tribute” to an icon. She’s insane with grief right now, so we’ll give her the benefit of the doubt, but as Carole pointed out, it was terribly tone deaf…even for Luanne (it’s funny because she thinks she can sing).

Sonia was uncharacteristically anti social for most of the evening. She was escorted by the ever faithful, Rocco, and claimed she just wanted to spend time with him before he left, but Dorinda found it rude that she couldn’t even be bothered to greet her.

When Sonia finally did make her way over to her friends, she was scolded for her rudeness and her loose lips. She’d been doing a lot of talking to the press about Luanne, even going so far as to claim that Luanne had started dating again before her divorce was final.

Sonia defended herself, saying that she’d only wanted to let everyone know that Luanne was doing well and enjoying the single life, and since Tom had basically never stopped “dating”, it really shouldn’t have been a problem.

No one seems particularly sympathetic to Luanne, although most of them at least took the time to reach out and check on her. But Carole couldn’t even be bothered to do that.

She heard through the grapevine that Luanne was disappointed that she hadn’t heard from her,  but she figured if anything, Luanne was the one who should be calling everyone else to apologize for calling them “jealous b****es” for the last two years.

Bethenny wisely intervened, and changed the subject to the new home she’d just purchased. When the ladies asked her to describe her new digs, she told them that it was on the highway.

Apparently, when it comes to the Hamptons, “south of the highway” is the place to be, and Ramona rudely pointed out how undesirable living on the highway truly is.

Bethenny said Ramona just couldn’t help but be unkind, and that she was very happy with her new home, thank you very much! Besides, Ramona “only” has an apartment and a house in the Hamptons, while Bethenny owns many properties, and therefore knows much more about real estate.

Ramona quickly tried to clean up her south of the highway snobbery, and said that she was really very happy for all of Bethenny’s success, and wanted to “empower” her and all women. Well, it didn’t sound like empowerment, but, that’s our Ramona!

Bethenny called BS on Ramona’s little girl power speech, and promptly told her where she could go. The evening ended pretty ubruptly after that, and Dorinda bid a drunken farewell to her guests, and was guided out of the party, just as the plastic bubbles finally began to give way on her Lady GaGa costume. But not before she told everyone who would listen that the I’ll fitting getup had been designed expressly for her by “Adam Sandler’s thing”, who designs costumes for SNL. I guess this is a good thing, so um…congrats?

What a night! And what a season ahead. Previews show the ladies pulling out all the stops for season 10, with plenty of the fights, tantrums, and drama that we’ve all come to expect in The Big Apple. Stay tuned!

TELL US – THOUGHTS ON THE RHONY SEASON PREMIERE?