by Tiffany Brown May 10, 2018 61 comments
ShareTweetWhatsappPinterestRedditTumblrMailFlipboard 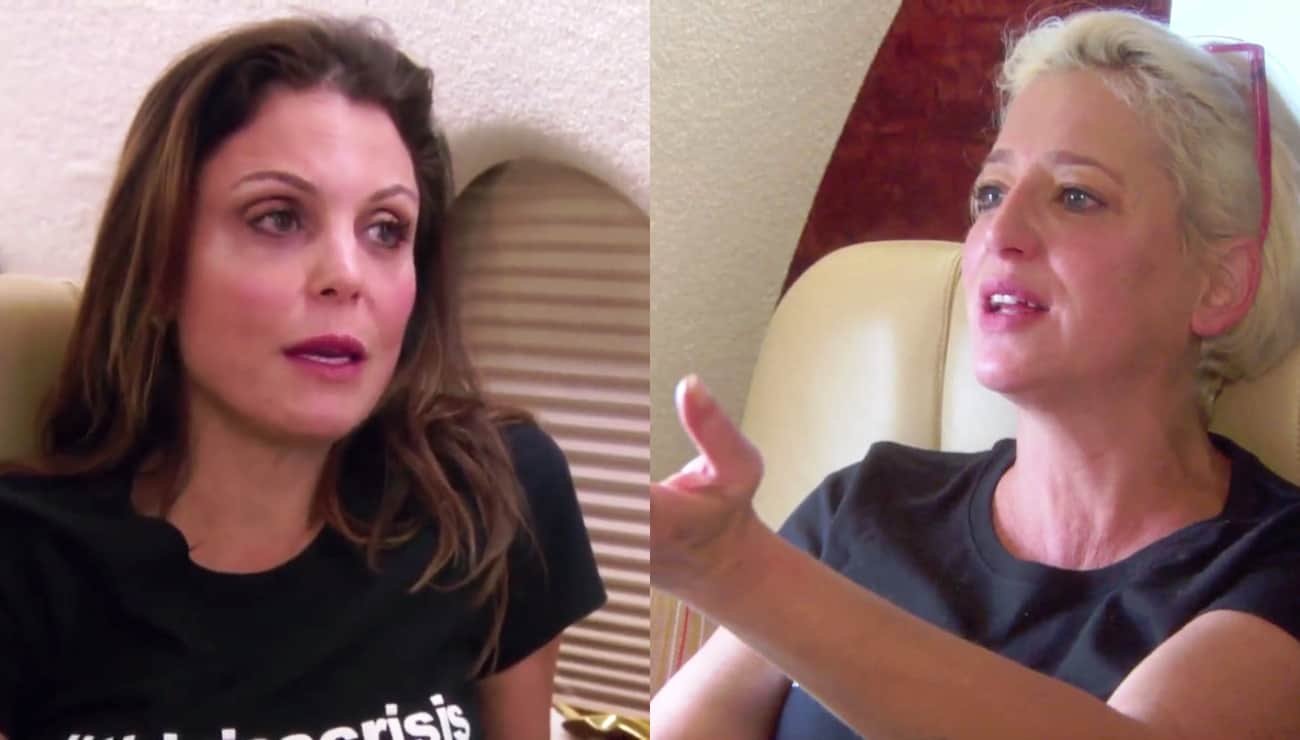 They say New Yorkers move fast, but this season of The Real Housewives of New York has already been filled with so many shifting alliances, I wonder if even they can keep track.

Bethenny and Carole have been  besties for years, but something’s definitely off with them this season. So far, neither of them has been able to put a name to their issues, but as Ramona observed during last night’s episode, it’s sort of like watching a couple heading for divorce.

When Bethenny decided to take one of the ladies with her to Puerto Rico, she chose Dorinda because she felt that she was the most “low maintenance” of the women, and she felt Carole hadn’t  shown much interest in the work she’d  been doing.

And she’s been doing work! It’s actually really impressive what she’s accomplished. Amazingly, she managed to get millions in donations and supplies, and borrowed planes to get the aid to the people on the island.

In fact, Bethenny’s plane was the first to touch down in Puerto Rico after the storm hit .  She was even there before the President! Although,  in his defense, he was not yet aware, at that point, that Puerto Rico was under his jurisdiction. Besides, it’s difficult to get there, as it’s surrounded on all sides by “big water”.

But Bethenny certainly managed, and last night she was heading back, this time to deliver $125k worth of gift cards to the residents, most of whom had lost everything, and Dorinda was really excited about joining her.

When Ramona informed Carole that Bethenny had taken Dorinda, she was surprised, but said it was “fine” in a way that made  it clear it was anything but fine. She was clearly a little hurt, but she needed to save face, so she played it cool.

But Carole IS a bit high maintenance. Just ask the poor waitress who had the misfortune of serving her and her new bestie, Tinsley at lunch. Carole ordered eggs, the style of which she changed several times, before finally settling on 1 hard boiled egg,  and 2 scrambled, which she specified should NOT, under any circumstances, be touching each other.

And she’s bossy too! When Tinsley mercifully ordered simple avocado toast, and was told it came with cheese, Carole immediately chimed in and said “no cheese”. No cheese?! First of all, no one in their right mind says no to cheese. And secondly, let the girl order her own food!

So, yeah…I can fully understand why Bethenny wouldn’t want to take her to a storm ravaged island. I wouldn’t even want to meet her at a diner! No cheese! Can you imagine?!

But in Carole’s defense, she was feeling a bit out of sorts . In fact, she was still in her pajamas! Although knowing Carole, it’s more likely that it was another one of her “fashion statements” than a sign of depression.

But either way, she’d  just gotten a rather upsetting call from her ex boyfriend, Adam. He told her he’d recently gone out with another woman, and planned to see her again.

Carole was surprised and disappointed by this news. Granted, she was the one who ended the relationship, but they’d continued seeing and sleeping with each other on a nearly daily basis since their breakup, and had all but slipped back into an exclusive relationship..or so she thought.

Carole said she felt that Adam probably thought she was a “cool chick”, who was happy being friends with benefits, but that a she’s not quite cool enough to put up  with him um…benefiting other women, and now she just “feels like he no longer exists”. Nice knowing you Adam!

Now, as it turned out, Bethenny probably wished she’d just gone to Puerto Rico by herself because traveling with Dorina turned out to be pretty messy!

They began their trip in Miami, where Bethenny explained their mission, and introduced Dorinda to some of the other people she had been working with. The two women also enjoyed a few cocktails together before joining Bethenny’s friends for dinner, which would prove to be a big mistake.

Dorinda was clearly tipsy, but she was hell bent on joining in on the conversation, just the same. She began by making a few misinformed observations, but soon became downright combative. She asked Bethenny’s friend, Michael, if they should be concentrating more of their efforts on the “home front”. Seriously, does NO ONE take geography anymore?! Puerto Rico IS the “home front”!

The others at the table looked at her in disbelief, and Bethenny tried to stop her from embarrassing herself any further, but Dorinda was on a mission! She continued arguing with Michael, asking if the people he’d helped would ever be able to become “self sustaining”. When he informed her that several of the children he’d worked with in Haiti were now in college, she snorted out a derisive laugh, and said she “doubted “ they were in college after “only four years”.

Michael informed her that the earthquake in Haiti had  actually happened 7 1/2 years ago, and Bethenny added that Michael knew more about it than she did, and that she should “just stop”.

Dorinda didn’t appreciate being chastised, and told Bethenny that SHE should stop. Bethenny became visibly frustrated, not to mention embarrassed in front of her new humanitarian friends, and told Dorinda she really didn’t want her to  join them in Puerto Rico, if she was going to be so negative.

Dorinda said that she had been really excited about the trip, but that Bethenny “always ruined everything”, and stormed out of the restaurant, leaving Bethenny’s friends staring after her in shock.

But Bethenny’s used to such behavior from Dorinda, and despite her humiliation, actually defended her, telling the others that she really is a great person, who wanted to help. She also sent Dorinda a text letting her know that she was still welcome to join them.

She added that she felt compassion for Dorinda because alcohol often “got the best of her”, and that when she woke up the next morning, and realized what she’d done, she’d likely beat herself up far worse than they ever could.

And Dorinda did feel regretful the next morning, and she did show up to catch the plane to Puerto Rico, but instead of apologizing right away, she simply started making small talk with Bethenny, as though nothing happened.

After few minutes, Bethenny couldn’t take it anymore, and confronted Dorinda, saying she treated “worse than Ramona does”, but that she “always gave her a pass” because she’s “a drunk”. Well, nothing like cutting right to the chase!

Dorinda said that she wasn’t a drunk, and that she’d  just been “anxious”, and had started drinking “too early” and on an empty stomach. But Bethenny told her that it was more than that. She said that Dorinda was too aggressive when she drank, and that it actually scared her.

At that point, Dorinda let her guard down, and apologized for her actions. She began talking about the “abyss of loneliness” she’d recently fallen into, and went on to explain the grief and anger she still felt over the loss of her husband, and how it made her feel “disconnected” from the person she’d been before his death.

Dorinda also brought up her recent argument with Sonja, and how hurt and furious it had made her when Sonja compared her divorce to a death,  because divorce was a choice, and Sonja’s husband could walk right through the door if he wanted.

Bethenny quipped that there was probably a better chance of  Dorinda’s late husband walking through the door than Sonja’s ex, and that Sonja knew it, and had likely lashed out at Dorinda out of jealousy.

Speaking of Sonja, she kept mainly to herself last night, and spent some time  with her real estate agent preparing her home for sale. She said that just being in the home is adding to her anxiety, and she desperately needs a change.

She’d like a new man in her life, as well, and shamelessly flirted with the photographer that came to take pictures of her penthouse. He quickly mentioned that he was married, which disappointed Sonja, but she perked right back up when she’s realized he was gay, and told him that meant that they could party together, and she could “make out” with husband.

Luann was also been looking forward to getting settled in a new home. Her divorce left her reeling and humiliated, but she’s determined to move on. She spent last night reconnecting with her daughter, and opening up about how it had been a mistake to get married so early.

She added that she’d never felt secure in the relationship, and had never felt at home in his bachelor pad, which lacked warmth, and of course, fidelity.

Well, it looks like the ladies are headed for some major changes to their lives and friendships during this historic 10th season, and the drama continues next week with things finally coming to a head between Bethenny and Carole. Stay tuned!