by Tiffany Brown May 24, 2018 64 comments
ShareTweetWhatsappPinterestRedditTumblrMailFlipboard 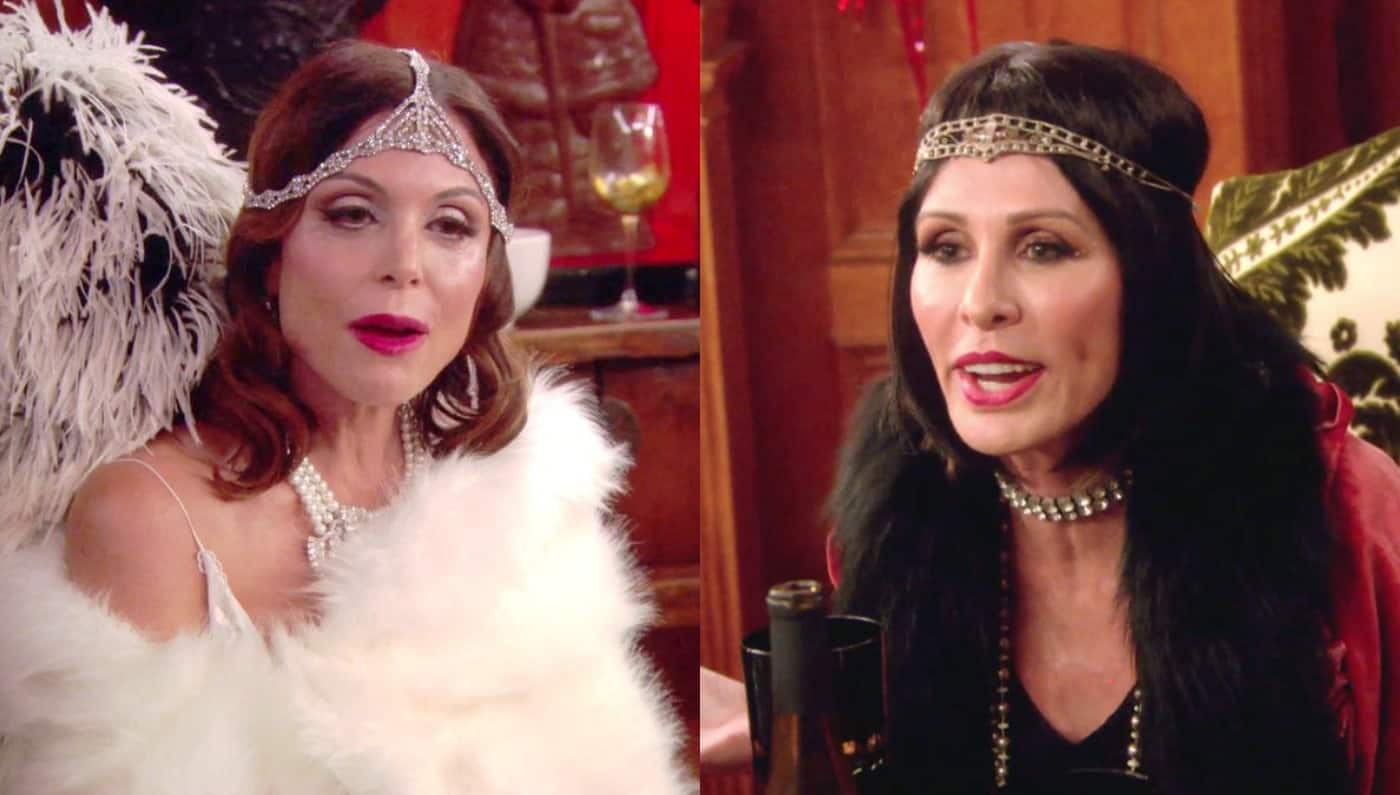 On last night’s episode of The Real Housewives of New York, the ladies headed to The Berskshires for an early holiday celebration. And really, is there anything more idyllic than a wintry weekend getaway in the mountains with your besties?

Well, if your friends happen be these women, yes…yes there is. For example, you could gouge your own eyes out with a melon baller, and I promise, you’d have more fun than they did.

Seriously, this is the fourth consecutive year that these women have made this trip, and even Dorinda, their fearless hostess for the weekend,  said that “there’s something about putting these women in a large, country house, with the gates closed, and the doors locked, that never turns out well”. And yet…they continue to go.

Granted, it really is a beautiful place, and Dorinda’s home is to die for, but didn’t someone once say that doing the same thing over and over again, and expecting a different result, is the very definition of insanity? But I digress.

The trip actually started out pretty well. Ramona and Carole headed to Dorinda’s house early, and the three of them had a great time. Hmm..Perhaps the secret to a successful housewife getaway is simple: just don’t invite the whole group.

Over dinner, Carole asked Ramona and Dorinda if they had seen much of Bethenny lately, and mentioned that she felt a growing distance between herself and her bestie.

Dorinda told Carole that Bethenny was upset with her because of her seeming lack of interest in Bethenny’s charity work in Puerto Rico, and because of Carole’s ex boyfriend, Adam’s refusal to travel to Puerto Rico with her to take pictures for the charity for no pay.

Carole failed to see how Adam not wanting to work for free had anything to do without her, but she was more confused by the fact that Bethenny had talked to Dorinda about it, instead of speaking to her.

After all, Bethenny is nothing, if not direct. Obnoxiously so, at times. So the knowledge that she was out there talking about her behind her back, rubbed Carole wrong way, and with Ramona and Dorinda’s support, she vowed to take the issue up with Bethenny later.

Meanwhile, back in New York, Sonja prepared for the trip by treating herself to a day of beauty, and after her facialist scolded her for giving away her pets, their conversation turned to the particular difficulties associated with having sex with two men at once. I’ll spare you the details, but suffice to say, Sonja and her facialist are disturbingly close!

As Bethenny made her way to the mountains, she reflected on all the fights and drama of their past trips to the Berkshires, and decided that this time it would be different. She was in good spirits, and was convinced that absolutely nothing could ruin this trip.

But here’s the thing: Bethenny had an attitude from the moment she arrived. She was just kind of mean for no reason..especially to Ramona.

After showing Dorinda her sweater, a hideous,  red monstrosity with 3 snowmen, and the words “Chilling with my snowmies” embroidered on it, Bethenny asked if she “got it”. Dorinda said she did, and complimented Bethenny on how cute it was.

Bethenny clearly thought the sweater was hilariously clever, and pleased to have gotten a chuckle out of it, wondered aloud if “the moron in there  playing with the snow globes (that would be Ramona) would  get it”.

Sheesh! I mean, I know Ramona’s far from Bethenny’s favorite person, but what happened to all those warm and fuzzy feelings from just a few minutes before?!

Bethenny asked after Carole, and seemed a little hurt when Ramona told her that she was still in her bedroom. But Carole came to greet her just a few moments later, and the two women seemed genuinely happy to be together.

They talked lightly and easily, and Bethenny gifted Carole with an equally hideous, red sweater of her own. This one embroidered with snowflakes, and the words “All I want for Christmas is a new president”, and the two shared a chuckle at the expense of the Twitterer in chief. For a brief, shining moment, it seemed like old times.

They even continued the fun when they went downstairs to find Ramona, and ask her if she understood Bethenny’s sweater. As predicted, she had no idea what it meant, and guessed it “had something to do with vaginas”. Um…What?!

Carole explained that it was a play on the phrase, ‘chilling with my homies’, but Ramona didn’t know what that meant either. Okay, now I see why Bethenny called her a moron.

The other ladies arrived shortly after, and as they all sat down to lunch, Dorinda thanked them  for coming, and announced some new house rules.

For starters, she said, her housekeeper, Lan, was not their servant, and told them that if they wanted something, they should get it themselves. She also said that no one was to touch anyone else’s belongings, and reminded them that they were in her home, and “not in a Girl’s Gone Wild” video, and should respect her property.

These may sound like the rules set forth by a den mother for a group of spoiled twelve year olds, but sadly, the events of their past trips made Dorinda’s  little speech completely necessary.

After lunch, the ladies transformed into their 1920s alter egos for the Murder Mystery Party Dorinda planned. Once again, Bethenny had plenty of snarky side comments.

She mused that Sonja’s character, “Maria Antipasta,” the accountant who “cooked the books” for the “Lord of the Manor”, was perfect for her because she was also “taking money from a man”.

When Luanne came downstairs dressed as French perfumer, “Jean Ménage”, sounding for all the world like a true Parisian, Bethenny quipped that “she will use any excuse to speak in one of her accents”.

She saved her most scathing commentary for Carole, who was so committed to her role of “Sylvia Treadway”, aka “Polly Politico”, she was actually smoking…again. Bethenny said that by playing “a know it all, with a deceased husband”, Carole was pretty much just “playing herself”.

In the midst of all this cattiness, the actors who would be playing “Rhett, the butler”, and the “murder victims”, “Mr. Feathersby” and his assistant, “Aiden”, arrived, and the party began.

I know what you’re thinking: it was beyond silly. But Dorinda had clearly put in a lot of effort, and the ladies happily played along. In fact, Ramona started collecting clues right away, and as luck would have it, her alter ego, “Lady Bird” enjoyed stirring the pot as much as the real Ramona.

She told  “Mr Feathersby” that his  assistant had told her that he hated him. It was all part of the game, but Bethenny still scolded her for her rudeness, before admitting that making note of who said what to whom could actually help her win, and adding that Ramona being an “a**hole” was finally paying off.

In pretty quick succession, both “Mr. Feathersby” and “Aiden” were “murdered”, but by that time, everyone was much more interested in dinner and more drinks, so Dorinda “confessed”  to the murders, collected her prize of a bottle of Dom Perignon, and showed the actors out.

Once the women on their own, Ramona began to recall a time they’d all been guests at the Berkshires home of former cast mate, Heather, and how miserable she’d been because “that woman” had no air conditioning.

Carole said it was very rude to refer to Heather as “that woman”, but Ramona said her name just “slipped her mind” for a second. Bethenny pointed out that she’d been getting mixed up a lot lately, and sarcastically suggested that maybe that was why told she’d told Carole that Bethenny had called her a “puppet” when, in fact, she hadn’t.

Ramona said that even if she had gotten Bethenny’s  exact words wrong,  the overall sentiment had been accurate. Ramona and Bethenny started to argue back and forth, but Dorinda quickly put a stop to it, by suggesting that Bethenny and Carole put their issues out on the table then and there, and finally talk about the obvious tension between them.

Carole had been hoping that she and Bethenny could have a private conversation, but now that the elephant in the room had been addressed, she decided they might as well get it over with. At first, Bethenny tried to deny having any problems with Carole, but Carole said that her dismissive attitude toward her made it was obvious that she did, and went on to mention the issues Dorinda had told her  about earlier.

Carole said this was a lie. She reminded Bethenny that even Page Six had gotten wind of their “growing feud, and had contacted her to get a comment. She also added  that Bethenny had told her that Dorinda was likely the one who had leaked the story to them.

Dorinda argued that she had never called Page Six, and while Bethenny assured her that she believed her, in the moment, she admitted during her confessional that she still suspected Dorinda, and was disappointed that Carole would share their private conversation with everyone at the table.

When Carole brought up Bethenny’s issue with Adam, she said that Bethenny had never talked to her about it, but Bethenny said she had. The discussion devolved from there as the ladies began arguing over tiny, insignificant details, such as which day of the week Bethenny had contacted Adam.

It went something like this:  “it was Sunday”; “no…it was Sunday”; “no honey, you’re wrong”; “don’t call me honey”; “don’t tell me how to talk”….blah, blah, blah! They hissed at home other like a couple of long tailed cats trapped in a room full of rocking chairs, as the others looked on, clearly wishing they’d just stayed in New York.

Well, that was quite a bit of drama, and it’s only  day 1 of their trip! And this fight is far from over. In fact, previews for next week show the other ladies getting in on the argument, after Carole reveals that Bethenny called Luanne “a loser”, and Ramona accuses her of not being supportive of other women. Stay tuned!