The Real Housewives of New York City Recap: The DUI That Stole Christmas

by Tiffany Brown May 31, 2018 77 comments
ShareTweetWhatsappPinterestRedditTumblrMailFlipboard 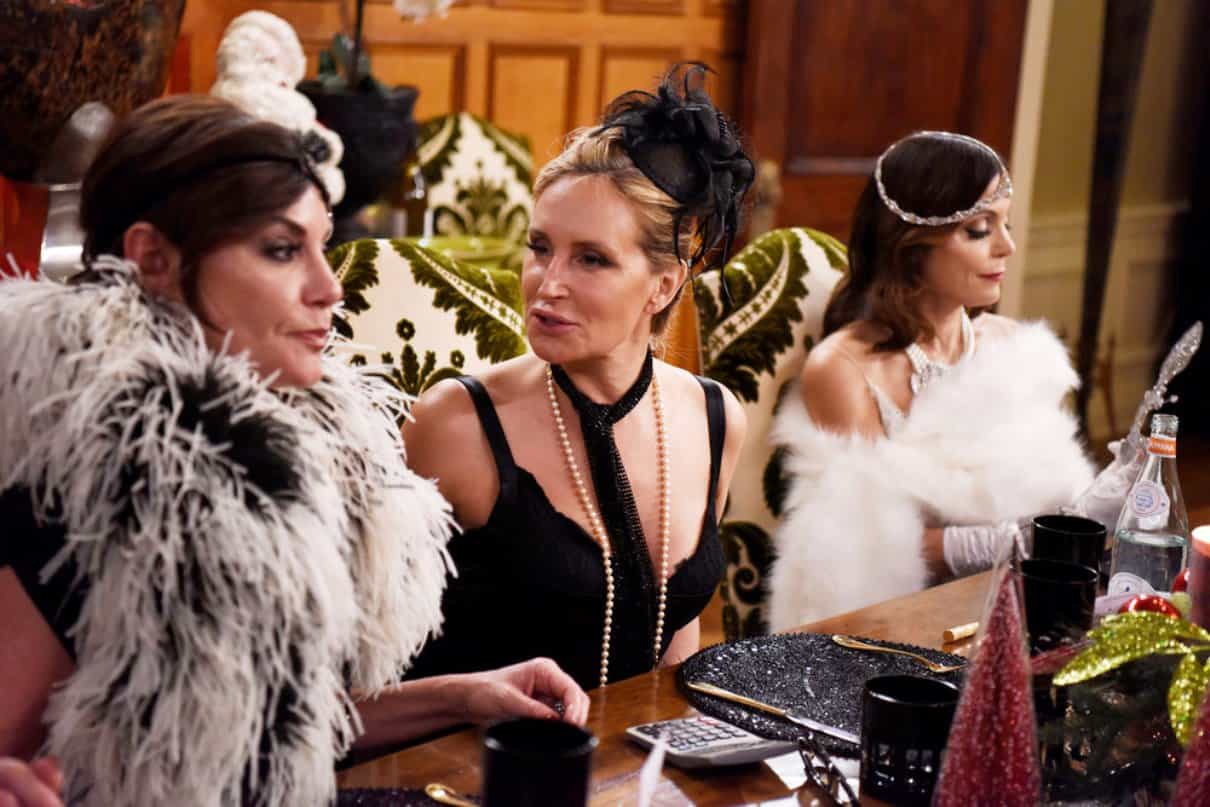 When we picked up with the fab 7 last night, they were still at Dorinda’s home in The Berkshires, and Bethenny and Carole were still mid fight…and it was getting pretty ugly!

It all began when Dorinda suggested that they finally talk about the recent tension between them, and quickly devolved into  bickering over nonsense..namely, whether or not Bethany had told Carole that her ex boyfriend, Adam, had asked to be paid to accompany her to Houston to take photographs for her charity.

Bethenny insisted that she had told Carole all about her conversation with Adam. In fact, she reminded Carole that they’d had an argument after Bethenny called Adam an “operator,” and Carole had defended him.

Carole insisted they’d never talked about it, but remembered that Bethenny had, indeed, made some nasty comments about him.

The others were getting pretty uncomfortable at this point, as you can imagine. They were there to have a good time and have an early holiday celebration together, but instead they were just stuck there, in the mountains, with no means of escape, listening to Carole and Bethenny argue about minutiae.

Luann finally spoke up, and said Bethenny was right about Adam, and Carole quickly informed her that no one cared what she thought. But Luann wasn’t going to be shut down so quickly, she told Carole to remember that she’d met Adam in her kitchen, and that he’d promptly jumped from a six month relationship with her niece to Carole…classic operator. Ooh…that one had to hurt!

Then, of course, Tinsley, tried to jump to Carole’s defense, and said that Adam had spent three years with Carole, so he clearly wasn’t “operating” on her. Luann just looked at her like she was a stubborn fly at a picnic, and then she shrugged, and said “whatever it takes.”  Oh, Countess, have I ever told you that you’re my hero?

By this point Bethenny had pretty much had it. She told Carole that she was done talking, and added that she had never really been angry, and that they’d simply been in “two different places” lately: Bethenny had thrown herself into her charity work, which Carole had taken little interest in, and Carole had been “off traveling with Tinsley.”

Now, if you ask me, THIS is the true source of the problem. Bethenny clearly feels that Tinsley has taken her place in Carole’s life, and she’s acting like a jealous ex. I suspect this was also why she picked that fight with Tinsley a few episodes back over the way she’d treated Sonja. Bethenny couldn’t have cared less about all that..she just wanted to go at Tinsley for something. And you may recall that she became downright murderous when Carole stepped up to protect Tinsley.

So, yes…Bethenny’s been a little overwrought, and Carole certainly has every right to be besties with whomever she chooses, but what she did next was such a blatant, and  unforgivable violation of girl code (section 3, article 235), that it pains me to write about it now.

Apropos of absolutely nothing, Carole announced that when Bethenny called her after she ran the marathon, she’d called Luann a “loser.” Just…why?! It’s a known fact that when two friends are talking about another friend behind her back, the details of that conversation go into the vault…forever! And to drag my girl, Luann into it?! NO!

Bethenny was shocked…they all were, really. Because I mean, who does that?! Luann just looked at Bethenny, and, without missing a beat,  said “well, if I’m a loser, everyone else sucks!” Amen and hallelujah to that!

Bethenny told Carole she was “acting like a 7 year old,” and said she couldn’t believe that Carole would repeat what she’d said. That sounded like an admission of guilt to Luann, so she stepped to Bethenny and asked why she would have said such a thing.

And here’s where you have to be proud of Bethenny: she manned up! She said she didn’t remember saying it, but that it was quite likely that she had, because she often DID think Luann was a loser (damn!). Furthermore, she said, at one point, or another, she’d said negative things about every single person in that room, and so had everyone else. Ok, 2 points for honesty, and 10 for chutzpah. But let’s imagine for just a moment how such an exchange would have gone down in New Jersey or Atlanta, shall we? THAT would be good!

Luann tried to stay angry at Bethenny, but to no avail. She told Bethenny she didn’t care what she thought of her, and Bethenny saved the moment by asking  if she cared about the lipstick on her face, which she reached up and wiped away (See?Bethenny clearly understands girl code (article 5, section 182), and Luann just laughed, and let her. And then Bethenny laid down some more truth, when she said quietly, “Of course you care what I think, and I care what you think, too. We’re friends.”  It was, perhaps, the sweetest thing I’ve ever heard her say.

By this point, Carole had walked away from the table, and was in the hallway, whining to Tinsley and Ramona. The rest of the ladies remained at the table trying to calm Bethenny down, but she was pretty fired up, and described the shift in her friendship with Carole as “seismic.”

As she left the table, clearly feeling dejected and defeated, she walked into the hallway to hear Ramona telling Carole that she knew how much she and Bethenny loved each other, but Bethenny wasn’t buying it. She told Ramona she knew she’d seen her coming, and that surely that’s not what she’s been saying a few moments before.

But before another argument could start, Dorinda came walking out with her own birthday cake, as she loudly sang happy birthday to herself. Poor thing!  I’d completely forgotten this was supposed to be Dorinda’s birthday party, and apparently so did her friends. The other ladies joined her in singing, and in an effort to lighten the moment, Dorinda put her face in the cake…lit candles, and all. Luckily, she got the laugh she was going for… and somehow managed not to burn her face off…and the party finally began.

Most of the ladies began to relax and enjoy themselves, but as they were popping bottles and “dry humping” each other, Bethenny went into Carole’s room, and overheard her rehashing their argument with Dorinda, and calling her a “hypocrite.” She told Carole that if  that’s how she wanted to play it, she could go and talk to everyone else about HER.

But Dorinda excused herself to go join the others, and Carole and Bethenny had a private chat. Bethenny again said that she wasn’t angry, but felt that Carole had changed, and was now more into “herself, and fashion, and selfies, and Tinsley.” There’s that name again. Watch your back, Tinsley!

Carole assured Bethenny that she was the same person she’d always been, with the exception of her haircut, and the two women shared had a chuckle about Dorinda’s  “camel toe,” before going to join the party.

The ladies headed back to the city the next morning, and everyone agreed that the trip had been a success. Bethenny and Carole even shared a goodbye hug! It would have been the perfect time for everyone to quit while they  were ahead. If only they could.

Back in the city, it was time for Bethenny’s annual Christmas party, complete with a gift exchange that involved putting the presents in a pile on the floor, then letting each woman choose one at random, open it, and decide if they wanted to keep it, or steal the next person’s gift—it’s what Jesus would would have wanted.

After the last gift was opened, Dorinda’s decorator, Michael, arrived with a special surprise: a life sized toy soldier for Bethenny’s daughter, Brynn. The little girl had fallen in love with a similar one at FAO Schwartz, but someone bought it before Bethenny had a chance to, and she’d begged Dorinda to help her find another.

Bethenny squealed like a child, herself, when it arrived, and hugged and thanked Michael, telling him again and  again that he’d “saved Christmas.” It was another sweet moment from Bethenny.  There was just one problem: she never once thanked Dorinda.

And she wasn’t finished being rude to her guests. When Ramona began talking about the skincare line she’s creating, Bethenny accused her of  doing an “infomercial.”

And there’s more! When Luann surprised everyone by announcing that she’d be spending the holiday in Palm Beach, the town where she’d spent so much time with her ex husband, Tom, Bethenny opened her mouth and stuck her entire foot in, by mentioning Tom’s new “busted up girlfriend!”

Luann looked devastated and humiliated, and who can blame her? As she said, Tom should be “living under a rock,” and not flaunting his new girlfriend around in front of her friends.

The party broke up pretty quickly after that, and Bethenny’s behavior was the talk of Luann’s holiday blood drive event the following day. Literally, everyone was angry with her, especially Carole, who still wasn’t over their spat, and was now hearing that Bethenny had been telling the other women that she “seemed sad.”

As the ladies aired their various Bethenny grievances, Dorinda wondered aloud about just why they all put with her. Well, that’s what I’d like to know, but few people ever dare to stand up to her.

Enter Ramona, Bethenny’s favorite victim. Bethenny actually had the audacity to call Ramona, and accuse her of coming between her and Carole, and enjoying their rift,  doing “emotional damage” to her friends, and “preying on the weak.” I’m not even sure where she came up with that last one.

But Ramona wasn’t having it AT ALL! She told Bethenny all the things the other women had said about her, and added that  she didn’t support her friends, and often out others down to make herself look good, and then hung up on her without another word!

But less than 48 hours later, an event took place that would make the ladies forget all about their petty squabbles. Luann was arrested on suspicion of DUI! And, let me be clear, “suspicion” is putting it kindly. The Countess was WASTED! The dash cam footage showed her being belligerent, unruly, and threatening to kill the arresting officer if he didn’t let her go!

Needless to say, that last part didn’t go over well, and the officer threatened to “hog tie” her if she didn’t calm down. But even that didn’t deter her, because she slipped out of her handcuffs,  and got out of the police cruiser! I didn’t even know such a thing was physically possible!

In the end, Luann was charged with DUI, “battery of law enforcement”, “corruption by threat”, and “resisting arrest with violence”. Now, I’m no lawyer, but apparently, at least three of those charges were felonies. Oh, Countess…how the mighty have fallen!

The show faded to black from there, but this is far from over! Be sure to tune in next week to see how it all unfolds!