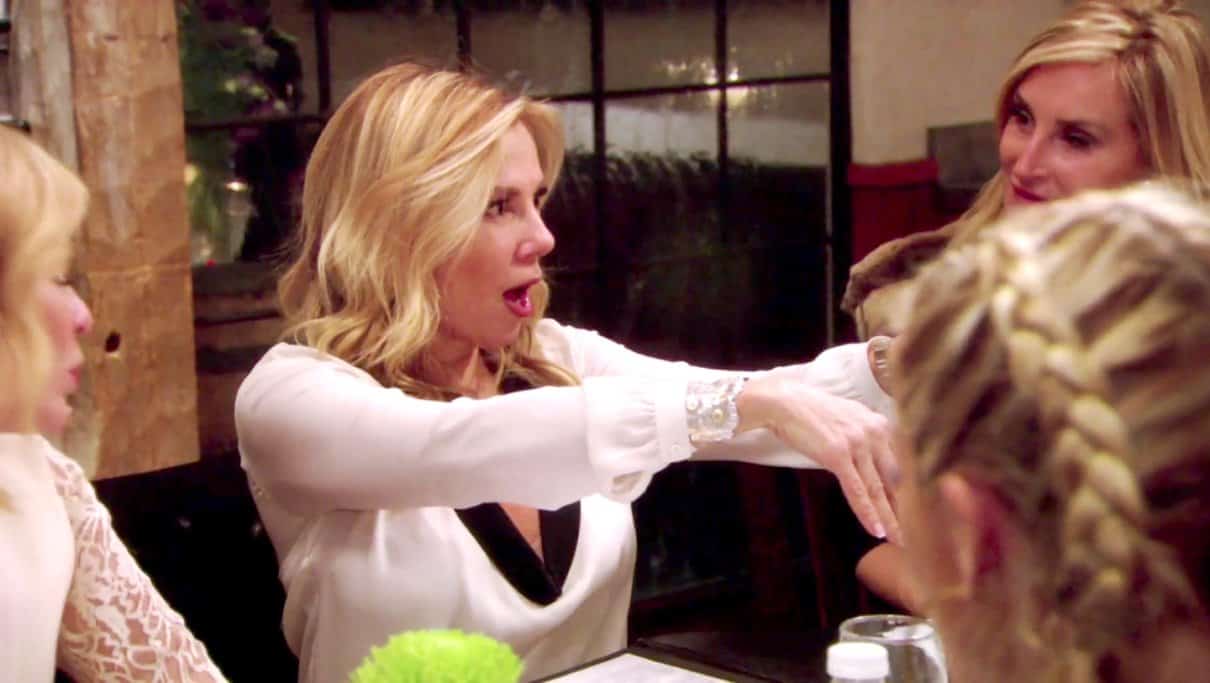 In last night’s episode of The Real Housewives of New York City, the ladies left the big city to enjoy a relaxing trip to the beautiful and idyllic Grace Mayflower Inn and Spa. Sounds lovely, right? And it might have been…if only they’d left the shade at home!

Tensions were running pretty high before they even left the city. Luann was just days out of rehab, and really feeling good, but she just couldn’t shake the rumor she’d heard about Ramona calling her ex-husband, Tom, to try to get an invitation to his New Year’s Eve party.

When she brought up the issue with Dorinda, she was surprised to find out that Dorinda had suspected it all along. Eagle eyed viewers may recall a limo ride Dorinda and Ramona shared a few weeks back, during which they discussed the fact that Tom had thrown the party on the same boat where he and Luann had held their engagement party, and Ramona had seemed awfully jumpy. But, of course, with Ramona, it can be a little hard to tell the difference between when she’s acting strangely, and when she’s just being herself, so Dorinda suggested that they withhold judgement until they knew for sure.

While the two ladies were riding  to the spa, Dorinda took the opportunity to ask the question that had been on everybody’s mind since they’d heard about Luann’s arrest: what the hell happened?!

Luann explained that she’d gone to her girlfriend, Julie’s house, but ultimately opted to stay at The Colony Hotel, a place that she’d often frequented with Tom…bad idea. But she’s invited a companion, a polo player she’d dated before she met Tom, to take her mind off things, and the two went down to the bar to enjoy the live band. Apparently, as time went on, Luann over indulged and became a little rambunctious, so her friend suggested they head up to their room, and that’s when things took a truly odd turn.

Luann and her friend got off on the wrong floor, and somehow, Luann wandered into an open room, thinking it was hers. Her friend followed her, and the two closed the door, and began kissing, only to have security come knocking on the door. Before she knew it, Luann was in the back of a police cruiser, kicking and threatening to kill the arresting officers. Shortly after that, she was locked in a cell and given a bologna sandwich. Needless to say, it was a humbling moment for The Countess!

Dorinda was hoping the trip would cheer her up, and have her feeling like her old self in no time. She made sure they would arrive first so that Luann was sure to get the best room, but perhaps she should have called ahead to make sure that they weren’t immediately offered wine and champagne? The good news is, Luann seemed to easily decline the alcohol.

As Bethenny made her way to the spa with Sonja, she expressed her lingering concerns about Carole’s recent frostiness toward her. She said Carole just seemed to be angry with her all the time, and it as generally because of something she’d heard about Bethenny from someone else…namely Dorinda.

And apparently, Bethenny wanted Dorinda to pay for coming between her and Carole, because she began gunning for her immediately. When she asked Bethenny to wait in the lobby until the rest of the ladies arrived, Bethenny informed her that she didn’t own the hotel, and that if she wanted to go find her room and relax, that’s just what she was going to do, and made her way upstairs without another word.

Dorinda was more than a little taken aback by Bethenny’s attitude, but chalked it up to Bethenny being Bethenny, and mused that she never quite new where she stood with her.

Luann began telling Sonja about Ramona calling Tom, and got another shock…Tom had invited Sonja to the New Year’s Eve party! But Sonja had wisely ignored his email. When Luann told her about Ramona trying to get invited, Sonja was completely un-surprised, and joked that, “Ramona would attend the opening of an envelope.” Hahaha…good one, Sonja!

When Ramona finally arrived, along with Carole and Tinsley, it was pretty clear from the start that she was feeling guilty about something. She fawned all over Luann, saying the trip was all for her, and that she was their “princess.” Luann saw right through it, and so did Bethenny, whose eyes rolled so far back, she surely got a good look at her own spine.

When Luann peppered Ramona with questions about how she’d spent the holidays, she once again became cagey and noncommittal, as she avoided discussing New Year’s Eve. But she quickly resumed her brown nosing, as the ladies got ready for dinner, telling Luann that “life was all about friendships,” and that “girlfriends need to stick together.” It was just too much!

As the others prepared for dinner, they discussed Luann, and whether, or not her arrest had truly brought her down a peg. Bethenny felt that it had, and said that “the Countess was finally starting to realize that she wasn’t such a Countess, after all”…although, she was the last to know.

Tinsley, on the other hand, wasn’t so sure. She was bothered by talk of Luann’s four felonies being reduced to misdemeanors, and told Carole that she was angry to discover that Luann’s arrest had somehow brought her own arrest record and Palm Beach mugshot back to the forefront. Carole simply advised her that it “wasn’t a good look” to “get competitive” about such things.

The dinner began nicely enough, with the ladies laughing and teasing each about their sex lives, but Luann  just couldn’t fake it take anymore, and loudly began telling Bethenny about Sonja being invited to Tom’s party, and Ramona calling him to ask to come. This was the first Bethenny had heard of it, and she was truly shocked.

Ramona, just across the table, heard them talking about her, and began defending herself, saying that she’d only called Tom because her friend had wanted to attend the party. She added that she’d run into Tom on a daily basis during her time in Palm Beach, another fact she hadn’t bothered to share with Luann.

Luann said she’d suspected all along that Ramona had called Tom in a petty attempt to get under her skin, and the other ladies backed her up, and continued telling Ramona how wrong she was. She finally conceded the point, and reluctantly admitted that contacting Tom had been “a bad call,” but stopped short of actually apologizing, despite Bethenny’s prompting. And you want to know the truly crazy part? Tom didn’t even extend the invitation Ramona so desperately wanted! He told her he was past his “limit” for guests.

It was so pathetic, Luann couldn’t even stay mad..until Ramona dropped one more bombshell: she was planning a party of her own, and had invited Tom! You could have heard a pin drop, as Luann and the other women stared at Ramona in utter disbelief! But then she burst out laughing and announced it had been a joke, and the others reluctantly admitted that it was actually pretty funny, and the tension, thick as a London fog, quickly dissolved.

After dinner, the ladies retired to their separate quarters for a post mordem on the evening. Bethenny said Ramona was a “terrible person,” and likened her to a “snake charmer,” because her humor made it impossible to stay angry with her.

Ramona told Carole and Dorinda that she really didn’t see the big deal, and explained that she wouldn’t have called any of  the other ex boyfriends and husbands, but since Luann and Tom’s relationship had just been  “a blip”, and had been so messy and short lived, she’d seen no harm. Dorinda assured her that it did NOT work that way, and Carole agreed, saying that Luann’s arrest and stint in rehab should have been an indication of how much the relationship had affected Luann. Um…ya think?!

The ladies eventually let the New Year’s Eve drama go, and turned in for the night,  but at breakfast the next morning, it was clear that Dorinda had gotten up on the wrong side of the bed!

Bethenny, who’d been looking for an excuse to confront Dorinda, quickly jumped to Sonja’s defense, saying that Dorinda still used her late husband’s name, and that it was no different. Dorinda explained that keeping her late husband’s name was actually quite different, and she was right, and Bethenny likely knew it, but she’d had it with Dorinda, and her “bullying” of Sonja.

As for Ramona, she was just pleased to be out of the hot seat, but she didn’t manage to stay out of it for a long. Just after breakfast, Luann logged into her social media account counts to discover that Ramona had posted pictures from their dinner the night before, and grew furious with her all over again.

First of all, other than her close friends and family, no one knew that Luann was out of rehab, yet, and she was trying to avoid the media circus for a little longer. Ramona’s post obviously made that impossible. But worse, the pictures made it look like Luann was out partying, and it was impossible to tell from the many wine glasses and bottles littering the table, that Luann had spent the evening nursing a Diet Coke, a misunderstanding that could cause problems during her upcoming court appearance.

When Carole saw Ramona’s post, she tried to explain why it had been a bad idea, but Ramona once again feigned shock and innocence, insisting that she had no clue why the pictures would be a cause for concern. Oh, Ramona, you poor thing! And it’s only going to get worse.

The ladies will continue their spa trip…and the fighting…next week! Luann will confront Ramona about those pics, Bethenny’s going to give Dorinda a peace of her mind, and  Sonja and Dorinda will reprise their argument about family crests, and this time, it’s going to get ugly! Seems like this is going to be one stressful spa trip. Stay tuned!

TELL US – THOUGHTS ON THE LATEST RHONY EPISODE? WAS RAMONA WRONG TO TRY TO GO TO TOM’S PARTY OR DID LUANN OVERREACT? WAS DORINDA OUT OF LINE FOR HER COMMENTS TO SONJA OR DID SHE HAVE A VALID POINT?