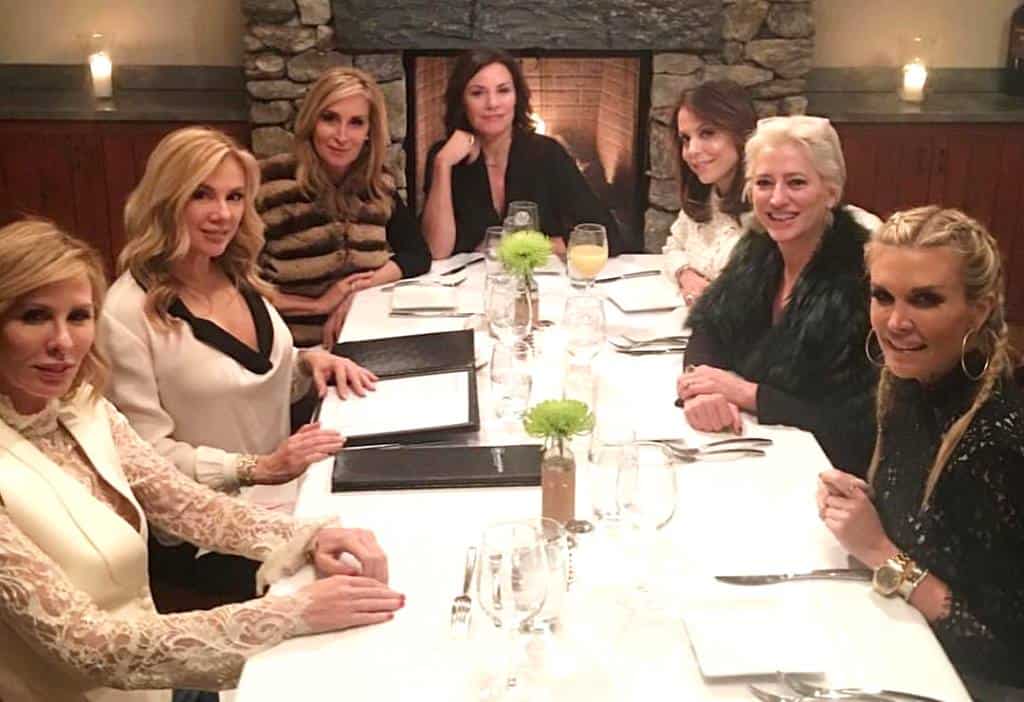 The most UNrelaxing spa trip in the history of the world continued on last night’s episode of The Real Housewives of New York City, as the ladies closed out their time at the fabulous Grace Mayflower Inn with a bang…a few actually.

As dawn broke on the second day of the trip, everyone was very concerned about the possible fallout from the pictures Ramona had shared on social media.

They were taken during the ladies’ dinner the night before, and Ramona insisted that she simply wanted to share them because they were “so beautiful.” And they were, but the empty wine glasses on the table could have posed a pretty big problem for Luann, who’s preliminary hearing for her DUI and other criminal charges, was only days away.

Luann also worried that the pictures had a carefree party feel, which simply wasn’t a good look a woman dealing with a scandal of that magnitude. Her publicist agreed, and began calling Luann to figure out how to diffuse the situation before it went viral.

Bethenny and Dorinda tried to calm her down, and advised her not to worry about bad press that hadn’t happened yet, but Bethenny called in her own publicist to help out just in case.

When Bethenny and Luann continued to discuss the matter later, Bethenny just happened to let it slip that Ramona had been seen having drinks with Luann’s ex husband, Tom. Of course, this came on the heels of the nasty spat Luann and Ramona had the day before about Ramona calling Tom, and asking for an invitation to his New Year’s Eve party, so Luann was furious!

But Bethenny managed to calm her down, and Luann promised not to say anything or confront Ramona about it. And she actually managed to hold out all the way until the appetizer course at dinner that night. But we can hardly blame her. The evening was so fraught with childish insults and catty remarks it was probably hard for Luann to resist getting her own digs in.

The tension started before the women even sat down, and  Bethenny certainly didn’t help matters by making  an enormous show of sitting as far away from Carole as possible, and saying  in a stage whisper that she was trying to avoid “an incident.” Good grief…talk about dramatic!

But it’s hard not to sympathize with Bethenny. She hasn’t quite been herself this season, and the recent distance between her and Carole is really doing a number on her. Dorinda tried earlier in the day to find out what was bothering her, and although she admitted she may have been being “paranoid,” she said that she didn’t “feel safe” with Dorinda, or most of the other women, all of whom she said she felt  “had an issue” with her.

She didn’t admit it to Dorinda, but in her interview, Bethenny said that she felt vulnerable without Carole by her side, and suspected that the others sensed that vulnerability, and were being more bold about coming at her because of it. So she puts up a wall, and comes at them first.

During dinner, Tinsley was the one in the crosshairs, and it wasn’t the first time she’s found herself there, either. In fact, as Carole’s new bff, Tinsley has become Bethenny’s favorite target. But Bethenny’s pretty slick, and is always careful to make it seem like she’s just making polite conversation, so in another whisper that could have been heard in a running helicopter, Bethenny asked Tinsley if she was engaged.

Tinsley said she wasn’t, and was clearly trying to just leave it at that, but Bethenny pressed on, saying that she’d heard that Tinsley had been wedding dress shopping with her mother a few weeks before in the city, and mentioned how “odd” it was if she wasn’t engaged.

Tinsley said that she and her mom had simply been having fun that day, and didn’t see what the big deal was, but the other ladies’ interest had been piqued, and they all began to chime in about how how strange it was. Bethenny had Tinsley right where she wanted her. She was embarrassed, and more importantly, she was the butt of the joke in front of Carole,  especially after the laugh Bethenny got when she compared trying on wedding dresses without being engaged to “trying on coffins.”

At that moment Tinsley knew for sure that Bethenny had just been trying to insult her, but when she accused her of just that, Bethenny just looked at her like she was crazy, and in a voice dripping with righteous indignation, insisted that “all she did was ask.” Well played, Bethenny!

In pretty short order, Dorinda jumped into the fray, pointing out that everyone had their quirks, like Sonja, and her penchant for wearing the Morgan family crest, for example.

For some reason, that family crest really had Dorinda up in arms.  Basically, she felt that since Sonja was divorced, she was one longer a Morgan, and should embrace her own legacy, instead of relying so heavily on her ex husband’s.

It was the second time she was bringing it up to Sonja, and she’d talked about it incessantly with the other women, as well. I have no idea why she cared, and none of the other women seemed to either.

But Sonja went OFF! She told Dorinda to mind her own business, and said she was tired of her always throwing her divorce in her face. She also said that the Morgans most certainly were her family, and when Dorinda continued to try to argue otherwise, Sonja stood up and got right in her face, daring her to say another word.

And you know what? It worked! Dorinda backed down almost immediately. She tried to play Bethenny’s game at first, acting as though Sonja was the crazy one, telling her to “calm down,” but she’s not in Bethenny’s league, so she quickly changed course, and apologized..and boy did she lay it on thick!

She said she’d never bring up the family crest again, and then went on and on about how “proud” she was of Sonja for “being so present”…whatever that means.

Sonja was pleased with herself for finally standing up to Dorinda, and later confided to Bethenny that she felt she’d “just been born.” Bethenny agreed that she’d handled herself quite well, and assured her that she’d thoroughly  “checked” Dorinda, and she likely wouldn’t be picking on her again.

With all the fighting going on, Carole spoke up, and reminded everyone of their trip’s true mission:helping Luann make a smooth and relaxing transition from rehab. Sufficiently chastened, the women all scrambled to ask Luann if she was, in fact, having a relaxing time, which gave Luann just the opening she needed to confront Ramona.

She said she was TRYING to relax, but that the pictures Ramona posted had her pretty stressed. By now Ramona was tired of hearing about it, and became indignant, saying she “didn’t get the f—ing memo” about not being allowed post pictures.

The Countess looked downright murderous, but before she could actually reach across the table and grab Ramona by the throat, Bethenny stepped in, and explained that they were the only ones who even knew Luann was out of rehab, and that she was trying to keep a low profile, but that the pictures had reignited the public’s interest in the sordid details of Luann’s arrest.

And that’s when Ramona finally got it…or at least pretended she did. Now here’s a memo I hope she does get: stick to reality tv, girl, because you are a horrible actress!

She really overplayed it..bugging out her eyes in that weird Ramona way she has, mouth agape, shaking her head violently, saying “oh my god” over and over. She even managed to push out a few crocodile tears.

But Luann saw right through it, not that it took that much seeing, considering Ramona could barely contain the smile that was playing at the corners of her lips, even as she apologized profusely, and admitted she was wrong.

Luann called her out on the smirk, and Ramona insisted she was taking no pleasure in causing Luann pain, but try as she might, she just couldn’t arrange her face into a remorseful frown that looked genuine. And she tried REALLY hard! The poor thing looked nearly apoplectic by the time Luann got around to talking about Tom. I thought her eyes were going to jump right out of her face!

The others had to agree with Luann, yet again, that Ramona had been wrong for trying to get an invitation to Tom’s party…especially since he told her no…but when they heard Luann mention that Ramona had actually gone out for drinks with him, they were really shocked.

Luann never revealed her source for the information, and for a second, it looked as though Ramona was going to try to deny it, but she fessed up, which might have been admirable had she not been so full of justifications.

She said that Tom was her friend, and that they “ran in the same circles.” She also explained that she hadn’t actually made plans to meet Tom for drinks, and that he’d just “happened to be there” when she met her friend, Harry at the bar in The Regency Hotel. That little tidbit didn’t help matters at all!

Luann said that Harry was no better than Tom, and quipped, “Tom, Dick or Harry..it didn’t matter, because they all live in the same penthouse.” And the other ladies agreed, reminding Ramona that Harry had trashed Luann to the press during and after her and Tom’s divorce, and was an all around pot stirrer, in general.

Ramona was still trying to justify it all, when Luann finally decided that she simply couldn’t look at her a second longer, and left the table.

Magically, by the time the rest of the ladies made their way back to the inn, Ramona’s tears had dried up, and she even found the strength to scarf down some of the freshly baked banana bread the staff had set out for their bedtime snack. It was a truly amazing recovery.

To her credit, Ramona did text Luann to say that she’d shown poor judgement, and hadn’t meant to hurt her, and at Dorinda’s urging, she even attempted to apologize face to face, but Luann didn’t want to hear it. She wasn’t nasty or rude, she just said she didn’t care to discuss it at the moment, and Ramona accepted that, and left her alone.

Dorinda assured Ramona that Luann would get over it in no time, and that she was probably just nervous about her hearing. She predicted that Luann would feel much better after it was over, and joked that she might even go out and have a drink a drink with them afterwards! Ugh…too soon, Dorinda, WAY too soon!

Well, the ladies will be back in the big city next week, and there’s plenty more drama ahead. Viewers were treated to an extended preview of  the second half of the season, and clips show the ladies taking another fateful vacation, and while it begins with the usual petty squabbles, it ends with the ladies in very real peril! Stay tuned!