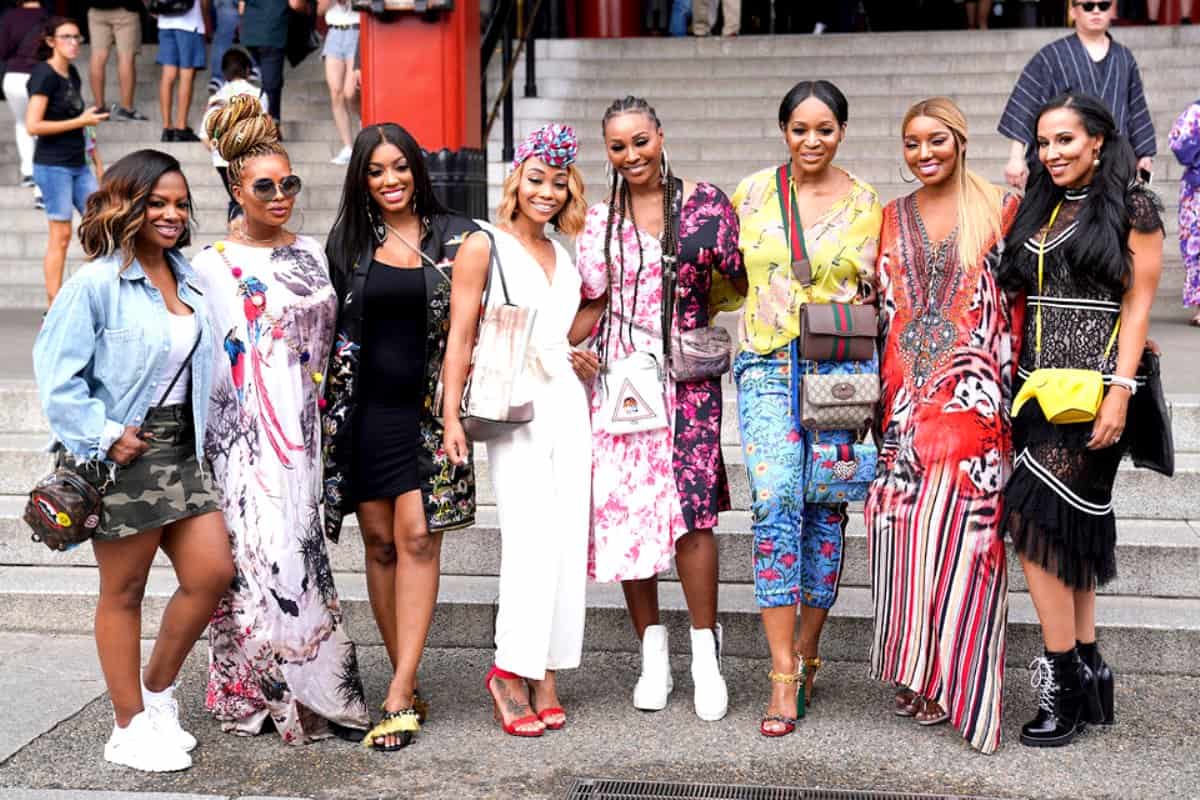 The ladies of The Real Housewives of Atlanta continued their tour of Tokyo last night, and if you thought the first leg of the trip was a disaster, it only went from bad to worse. Seriously, these ladies will argue about anything these days (or nothing at all) and half the time, the viewers don’t even know what they’re talking about anymore. Have the peaches run their course? Are their best years behind them? I genuinely hope not. But it’s not looking good. Welcome to the most nonsensical argument of all time!

When we picked up with the peaches, NeNe was in the middle of reading Tanya for filth because she’d become offended when NeNe made the comment that perhaps she’d marry someone else other than her fiancé, Paul.  It also wasn’t the first time NeNe had made a snide comment about Tanya and her three year engagement. But according to NeNe, she doesn’t care about Tanya or Paul and proceeded to make that fact painfully clear to Tanya, who asked why she would possibly wish she wasn’t marrying Paul. NeNe said she didn’t wish a “motherf***ing thing” when it came to Tanya’s life, and told her to get her “50 feet” on Paul. But here’s the thing, if NeNe just doesn’t care, and Tanya and Paul ‘aren’t even on her radar,’ why all the yelling?

That was certainly the question on the minds of the other ladies, who simply sat watching the uncomfortable exchange play out until Tanya finally just gave up trying to reason with NeNe, and dissolved into tears. Showing fear and emotions is almost never a good thing. Little known scientific fact: dogs, bees and Real Housewives can smell fear–and they like it. But much like the lame baby antelope that gets left behind at the watering hole, it seemed that Tanya’s weakness seemed to bore NeNe, and she didn’t even bother pouncing on her any further. She simply got up and walked away, leaving the ladies bewildered in her wake.

They left the restaurant to head back to the hotel, but NeNe was nowhere to be found, and all attempts to call her went straight to voicemail. As it turned out, she’d gotten into a cab, and was headed back to the hotel. But what had all that been about? Well, during NeNe’s confessional, she said that she had a lot on her mind with Gregg and that she was tired of the other women feeling that she was “so strong” and “could handle it,”  when in actuality, she was “crashing.”

Now, if you thought NeNe’s exchange with Tanya was stupid, just wait till you get a load of what nearly brought Eva and Marlo to blows:

When the ladies (sans NeNe) were on their way back to the hotel in the shuttle, Eva announced that the time for tears and drama was over and that they were all about to “turnt.” They were in Japan to celebrate her bachelorette party, after all, and damn it, they needed to do it up right. She’d planned for them all to spend a “sexy-casual” night dining, drinking, and karaoke-ing in Tokyo’s red light district. But when they started talking about what to wear, things got pretty heated. Yes, you read that correctly. Things got pretty heated over what they were all going to wear.

Shamari asked Eva what she thought she should wear for their night on the town, and Eva told her just to be comfortable, but to avoid wearing her sneaker wedges. Upon hearing Eva of all people giving out fashion advise (you saw those braids, right?) Marlo tells her she shouldn’t be talking with her “Birkenstock-wearing a**.” Eva said Marlo had her “all the way twisted because she only wore flats from Chloe and Fendi. To prove her point, Eva held up her foot to show her “1,200 flip flop. Yes, you read that correctly, too. A $1,200 flip flop. Marlo accused Eva of only being able to wear something so luxurious because she was “plugging them” on the show–unlike herself, who was constantly wearing the most expensive fashions, just because…..

But Eva begged to differ. She said that she’s been rolling in thousand dollar plastic shoes for years and that Marlo better stop ‘trying to bring her out of her box.’ Marlo told her to ‘come on out’ of said box, and both women continued bickering nonsensically and unintelligible with one another for the rest of the trip. Poor Aiya, the ladies beleaguered “cultural guide” looked on in puzzled dismay, as they continued throwing shade at each other’s fashions, weaves, wigs and relationship statuses.

When they finally got back to the hotel, and attempted to check on NeNe, she couldn’t even be bothered to answer the door, but by evening she was back in full form, raring to go out on the town. When Cynthia and Marlo stopped by her room, she explained that she simply was not there for Tanya’s nonsense, and explained to them that she’d been having a problem with Gregg earlier.

Meanwhile, Tanya went to Eva’s room to lick her wounds, and express her shock over NeNe’s reaction to her over lunch. Eva told Tanya that NeNe had a lot going on, but was basically harmless and that she should simply lie low and give NeNe her space for the time being, and concentrate on having a good time. Talk then turned to her own afternoon spat with Marlo, which Eva said stemmed from the fact that Marlo was “jealous” because she had to put so much more effort into “looking fly” than Eva did. But at pretty much the exact same time, Marlo and Cynthia were giving a post mortem of the argument to NeNe, and Marlo explained that it was Eva who was jealous of her because everything she had was designer–including her toothbrush (have these women not heard of Target?).

When the ladies met up outside to take the shuttle to the red light district, NeNe was running fashionably late once again, and Porsha wisely begged off for the evening, claiming general pregnancy malaise (who could blame her?) As the rest of the ladies headed off, Tanya attempted to hold out an olive branch to NeNe, and said that she just wanted to have “peace.” But NeNe quickly dismissed her attempt with a quick “I’m fine,” you know, just in case Tanya didn’t hear NeNe the first 15 times she yelled that she didn’t care enough about her to be bothered.

Things simmered down a little after that, and the ladies enjoyed their evening of karaoke–they even found an Xscape song to sing along to! Although NeNe was still feeling shady. She said that she loved that song, but that she couldn’t even believe that Kandi was on the track because she couldn’t hear her voice on it. Still, everyone was in pretty good spirits, and Eva said that this would be the one trip that went off without a hitch or any drama. Um–had she been sleepwalking for the first two days of the trip?! It had been nothing but hitches and drama since they’d touched down in Japan!

The following day, Eva got more bad news about her grandfather. Her mother called to let her know that they were going to be disconnecting his life support later that day and that she should expect that it wouldn’t be much longer before he passed away.  Upon hearing this, the ladies rushed to Eva’s side to comfort her, and surprisingly enough, it was Marlo who led the charge. NeNe, on the other hand, held back, saying that she felt bad for Eva, but hearing about her grandfather made her think about Gregg.

Eva contemplated going home to be with her family, but the other ladies convinced her that her grandpa would have wanted her to stay in Japan and get “turnt,” so they decided to party. Once again, they headed for the shuttle, with Aiya watching the clock. Once again, Shamari was a little late, but as with everything, NeNe took things a step too far and was so late that she got left behind. The ladies begged the shuttle to wait, but apparently, Aiya had not been playing when she said tardiness was a major no-no in Japanese culture, and the train left the station without her.

When Cynthia finally got NeNe on the phone, and NeNe realized that she’d been left behind, she said she was fine and that she didn’t need to go along on the day’s excursion anyway–but her calmness was downright eerie, and Porsha predicted that by the time the night was over, NeNe was going to murder one of them.

The ladies attended a geisha performance, where despite Aiya’s constant requests for quiet, they loudly complained about having to remove their shoes (you did realize you were in Japan, right, ladies?!) In the meantime, back at the hotel, NeNe threw the cameraman out of her room, so she could attempt to reach Gregg, who had been avoiding her calls since she’d been gone.  Once again, her call went unanswered, and NeNe was irate, to say the least.

When NeNe finally deigned to go to other ladies for dinner at a vegetarian restaurant, despite the fact that she is now a ‘pescatarian’ (since when?!) her mood had gone from bad to worse.  She’d finally heard back from Gregg, but he had been giving her attitude.  As they boarded the shuttle after the meal, Tanya made a final overture toward NeNe.  Sheesh! Does this girl never learn?! She was about to awaken “Nay Nay,” NeNe’s truly crazy alter-ego, not to be confused with her truly crazy actual personality, but whatever. Anyway,  NeNe resisted, and after explained to Tanya (again!) that she simply didn’t care about her, or her situation, she agreed to let it go–for now.

The ladies’ trip to Tokyo (and their many temper tantrums) continues on February 10th–stay tuned!

TELL US – THOUGHTS ON THE LATEST RHOA EPISODE? WAS NENE OUT OF LINE WITH TANYA? OR IS TANYA JUST OVERLY SENSITIVE?