Home Real Housewives of New Jersey News RHONJ Recap: Melissa Believes Teresa Will Divorce Joe, Plus Dolores and Jackie Get Into a Fight

RHONJ Recap: Melissa Believes Teresa Will Divorce Joe, Plus Dolores and Jackie Get Into a Fight 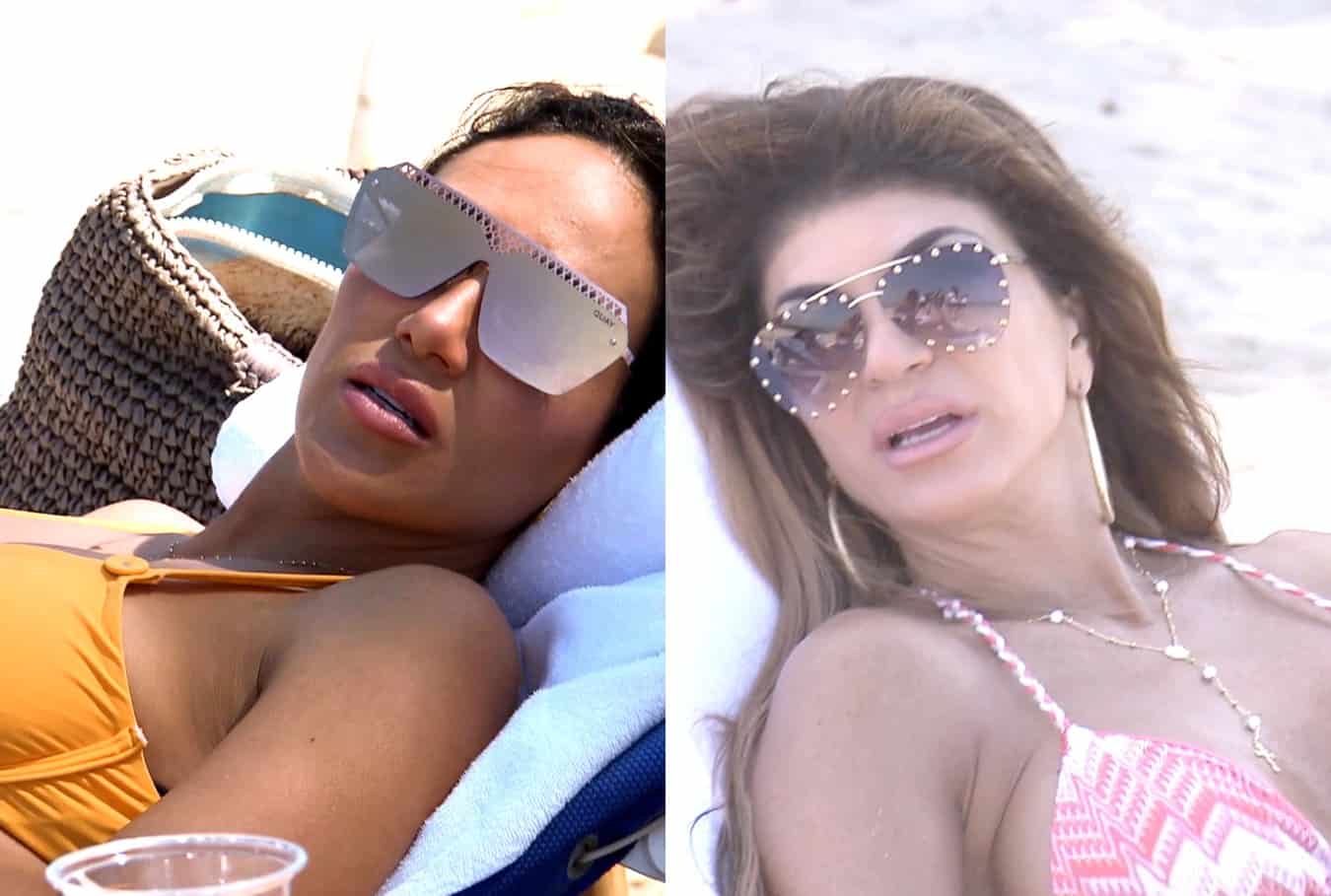 On this week’s episode of The Real Housewives of New Jersey, they are still in Jamaica making American tourists look like fools with their embarrassing behavior and ignorant comments…..

In the morning, everyone is FaceTiming with their husbands and kids except, of course, Dolores. She is forced to call her ex-husband Frank since she can’t reach David, which is no surprise since he is avoiding her calls a very busy doctor. Melissa talked to Joe about the conversation from dinner and he says, “wait until Teresa processes what was said about her.” This is a very slow process so tick tock…

Margaret is surprised Melissa wants more kids since she sees her as an attention whore party girl. Melissa tells Jackie that Dolores said they all were raised differently than her. Jackie is taking it as being offensive and rightfully so. Margaret asks Melissa if Teresa is upset over the jailbait comment. Melissa says it takes 12 hours for her to process it!

Margaret, Jennifer, and Jackie are meeting up to go horseback riding in the ocean. Teresa, Dolores, and Melissa go to the beach to get some sun. They talk about Joe Guidice and what he has missed out on being in prison. Teresa says she has been unhappy for a long time. The convo gets deep as Melissa admits she believes Teresa and Joe’s marriage will ultimately end in divorce. Melissa also tells Teresa she doesn’t think they will make it and she wants her to look forward to her future. Teresa doesn’t have much of a reaction.

Margaret definitely had different expectations for the horse ride. I guess she wasn’t prepared for them to be very large animals that live outside and aren’t perfectly groomed at every moment. She must read harlequin romances….While riding through the ocean, Margaret claims, “she likes it easy and she doesn’t like a good pounding?” I think her husband Joe might take issue with that statement!

Jennifer says her horse is grunting because I think he can’t stand the sound of her voice. I used to have horses, and they definitely react differently to people’s voices and tones, and that one is like nails on a chalkboard! I cracked up when Jennifer fell off her horse, which could almost be a metaphor for her to “get off her high horse!”

Margaret and Jackie say she is basically swimming in sewage with all of the horse sh** in the water. She claims she swallowed some “poo water.” It was karma to see her basically swimming in all of the crap that she has been spewing on this show. Margaret shared her story about her lawsuit and how she was being sued for using another company’s logo. She is empathetic regarding Teresa’s legal situation.

Dolores, Teresa, and Melissa are on the beach having drinks and discussing the previous night. They think they got the better deal hanging out on the beach. There is no way I would choose that over horseback riding in the ocean. Horses are better companions than this group of entitled women. Dolores says Jackie is fragile and insecure, which I don’t get. I think there might be some projection going on….

Teresa REMEMBERS what Margaret said right on the 12-hour mark! Ding, ding, ding!!! Teresa says Margaret is like a clogged toilet. Teresa would know about clogged toilets because it was rumored she and Joe were slumlords and I am sure they had clogged toilets in PRISON. Teresa’s mouth spews bullsh** pretty much on a daily basis with her ridiculous “going away” comments. She went to prison, plain and simple. Ignorance combined with stupidity is NOT a defense in a court of law!

They all get dressed up for Jennifer’s birthday dinner. Dolores has her stank face on when she sees Jackie. There is an awkward conversation in the car because of the tension between the warring parties. They share how their day went. Jennifer has to share she drank poo! Teresa finds the production placed sign at the restaurant that says “Any woman can have the body of a 21-year-old as long as she buys him a few drinks first.” She claims she loves it. Teresa says Margaret must not think she is smart enough to get the dig, but no, that is not correct — she definitely knows you are a dum-dum!

Dolores says to Jackie that they were raised so differently than her. She was cut from a different cloth? Okay, that wasn’t nice! I personally would take that as a compliment. Dolores tells Jackie basically you are on my last nerve! Dolores says Jackie overreacts over insignificant stuff more than the rest of them? Huh really, a little delusional maybe?? I think Dolores should be on the Real Housewives of Orange County because La La land is there!

Off the cuff, I could come up with just a few situations to argue against that hypocrisy!  Just a start: sprinkle cookies, the Gorga by injection comment, calling Siggy Flicker Soggy, the battle of the cookbooks, etc. I could go on and on with the stupid stuff they have all fought over! I loved the montage of Dolores acting like a raging lunatic!! Welcome back, scumbag!

Dolores also has to throw in the ridiculous high school comeback “everyone said the same thing” bullsh**. What a cop-out! This is my take on this conversation. Dolores cannot match Jackie’s intellect because Jackie is definitely one of the more articulate members of this group, which isn’t saying a whole hell of a lot! I think Dolores resents her for that reason. Dolores says Jackie fights over stupid stuff and the rest of them don’t???? She needs to watch back the old episodes of this show.

Margaret and Melissa say it is Jennifer’s fault because she opened up this can of worms telling Jackie that Dolores doesn’t view her as a friend. Jennifer says she was just trying to help? Help with what? Starting a hair pulling contest? Are you freaking kidding me???? Jennifer and Teresa most definitely have an alliance this season and we all know how Teresa feels about Jackie (She barely tolerates her for a Bravo paycheck). I feel like this storyline is on rinse and repeat. Thanks, Production…

Jackie says Dolores is making judgements out of her ass. She thinks Dolores doesn’t like her because she is not “old school Italian.” The immaturity of this conversation is ludicrous. “I don’t want to be your friend.” This is the most nonsensical argument! Dolores is definitely provoking Jackie so she can say she overreacts. Margaret tells the others the party is over,  thank God for that reprieve. Jennifer announces “she is going to roast their ****” tomorrow night. Her comedy act will most definitely be a buzzkill, and so they should get loaded before so they can survive sleep through it ….

Next week, David gets grilled about Dolores getting a commitment from him and Danielle had sex with runaway ex-husband Marty???? I thought he was in the witness protection program????