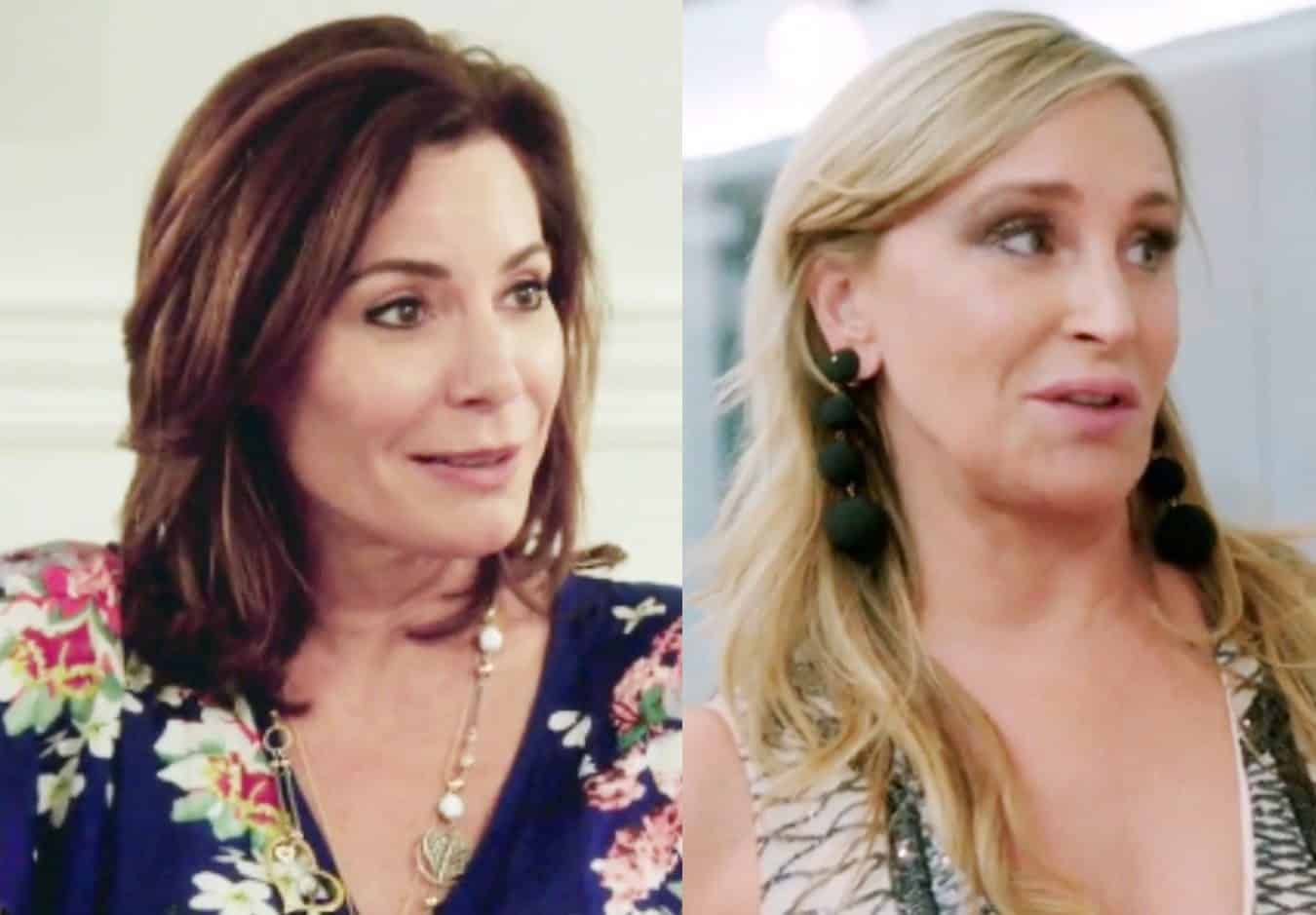 On this week’s episode of the Real Housewives of New York City, we join the ladies back in the Hamptons. This should be a good time with this crazy menagerie of women!

Luann has already left the building since she needs a chiropractor code. She did have to sleep in the lower level, you know, where the peasants sleep.

The ladies are heading to a winery or maybe a restaurant that serves wine? The winery restaurant does look beautiful. Leah gets why Luann would stay away from the winery. Probably because Leah orders a glass of wine. These women will drive anyone to drink.

Ramona wants everyone to share something that defines them or makes them vulnerable.  She has to talk about herself first because, of course, everything is always about her. Ramona was triggered by a flashback when she was 16 looking out the window at some clouds. She then leads into the question of where is my life headed?  The loss of her mom affected her. Ramona misses her safety net.

Tinsley shares she has a fear of being alone. She notes they all have a family but she is a party of one. Dorinda compares Tinsley to an iceberg from a documentary on the Discovery Channel. She loses me in her comparison. They are big and beautiful on the surface but 90% of it is underwater. I think that is a better analogy for Dorinda since she has been underwater…

Tinsley shares that she is dating Bruce who has three kids. She thinks having a family like he has is like being around an army of people. I don’t think she wants a guy who has kids that she has to compete with. Tinsley isn’t happy with her positioning on the totem pole. Leah thinks he is just a f**k boy. Sonja thinks that is a good thing. Lol, you have got to love her!

Leah tells her life-defining story about going into rehab. She had addiction issues. Her wild behavior was affecting her siblings. Leah’s parents left her at a halfway house run by nuns. She thinks her parents’ tough love molded her into who she is now. She is appreciative to her parents for forcing her to own her own sh**.

Dorinda breaks into tears and says she feels scared every day. She wants someone who she can lean on. Dorinda is tired of anchoring everyone else’s boats. Her boat is sinking, and John isn’t able to throw her a life raft. Sorry, Dorinda, John doesn’t have enough money to buy a boat nor a life raft! You need a guy with a bigger boat.

Sonja’s story evolves into a weird rambling of a bunch of nonsense. She thinks she has one foot in a nursing home, worries over paint and wallpaper, catching some dick on the way, daddy’s got a shotgun. Gosh, I missed her loony behavior and really needed a good laugh.  Sorry, I digress…

Ramona claims she has to go see her friend Joe Farrell who is hosting a party that evening. She, of course, has to mention how wealthy he is. When did Ramona steal Luann’s crown of delusion? These crowns are being passed around on all of these housewife shows, like RHOBH. IMO, LVP will always wear the crown.

The ladies are going to Ramona’s friend’s cocktail party. Tinsley shares Joe Farrell took her on a lame date to a basketball game. He didn’t even feed her. He also dated Bethenny. Hmm, this should be interesting. Rinse, recycle, and repeat of boyfriends in this group. Some of these guys need to be put in the scrap pile, though!

Luann came back after being reminded of jail by being relegated to  Ramona’s dungeon. Ramona claims she had a date earlier. She claims he is Persian looking. Sure he was, she must have had to work out some kind of an arrangement to allow this group of women to come over to his big expensive house.

On a side note: I don’t know if I believe her when she acts like she has such a great dating life. I think she likes to create the illusion that she is a hot commodity. She wants Mario to get jealous and beg for her forgiveness. IMO, not going to happen. I don’t think he misses her at all. He just tolerates her for the sake of their daughter.

Ramona critiques Luann’s Laura Ashley dress. She needs to fix hers because her boobs are falling out. I am sorry but that flowy yellow thing she was wearing with a grandma shawl wasn’t very flattering either.

Sonja appears to be already drunk and a little resentful of Ramona’s social climbing. I see a storm rumbling on the horizon…

Ramona, in the other car, is pointing out the homes of successful people. You know she knows the guys who invented light-ups in kids’ sneakers?

Sonja thinks Ramona has a lot of superficial relationships. She is really bitter in her ITM and I don’t like her sparkly outfit in it either. It is funny in the one car with Luann, Tinsley, and Leah they all commiserate about having mugshots. Own it, girls, at least you all had your lashes on!

Ramona and Dorinda arrive at her friend’s house. It is a really gorgeous home that is ironically for sale. No wonder why he invited them! Free advertising for the real estate agent!

Leah thinks the party has some weird white people. She sees Eyes Wide Shut happening. Where are the goat masks? She doesn’t want to be made someone’s bitch. LOL, she is great. I will give her that there are a lot of creepy old guys milling around by the front door.

All Sonja wants is some gin. She can’t believe the bar doesn’t have gin in such an expensive home. Me too, probably because this is really an open house to sell it! There are probably chocolate chip cookies in the oven too to make it smell good!

Ramona is obsessed with Joe’s 39 million dollar house. She is acting all proper introducing the ladies to her supposed friends. Ramona thinks that Sonja doesn’t belong with her new friends. She has to bring herself down to interact with Sonja. I am sorry, that is not very nice at all. Sonja actually partied with Puffy and John-John, you all!

Ramona catches Leah chewing gum. When did she become Miss Manners? Leah admits to swallowing the gum after Ramona scared the crap out of her with her bug eyes.

Ramona shamelessly flirts with the smarmy owner, Joe. Tinsley thinks that Ramona should date Joe. Leah thinks that men who are short and unattractive but rich $$$ can still be considered a catch. I know this crap has been going on for centuries, SIGH.

Joe shows the ladies the house. There is a bowling alley in the basement. It is actually more of a man cave/pleasure room. Leah might be right about the Eyes Wide Shut thing.

Dorinda thinks it is uber-tacky for a house tour. She thinks it is an American thing. When did Dorinda become a British snob? Just because she lived in London?

The house has a DJ booth, a skateboarding half-pipe, and some sort of sex swing looking thing. Ramona, of course, has to have Joe show her the swing. They were probably fooling around on it earlier to score an invite to this soiree. Ramona wants to be Joe’s captive. I am sure she does but he is looking for more of a catch and release situation.

Elyse, the housewife friend this season, shows up at the party. She was married to a wealthy hedge fund guy. I am not feeling her this season. She just keeps randomly showing up to film and really brings nothing to the show. No wonder why she got demoted to friend status.

Elyse describes Sonja as an accessory during her marriage to Mr. Morgan.  Sonja claims she was never a trophy wife because she never shaved her pu**y.  She is drunk off her a**. Okay, she is taking off on the crazy train. Clip, clip clip!

They were partners and she wasn’t a trophy wife. Sonja tries to say Tinsley was a trophy wife.  Nope, not accurate Sonja. Tinsley married her boarding school boyfriend.

Sonja’s voice level is getting louder and louder. They need to get her out of there. She is really embarrassing herself. Slow down your sexy roll!

Luann is complaining to Leah about the room that smells like dog pee. It is crawling with spiders. She also found a fridge in the basement with a lot of booze in it. Hmm, why would she be scoping out that fridge?

They try to feed Sonja to sober her up. Leah is having fun watching Sonja eye-f**k some poor kid. You know Sonja with the sexy J has an amazing vagina. Sonja is off the chain hitting on any man she passes.

Leah is just hungry and just wants some pizza. Sonja is pissed they are co**blocking her. It is funny how they have to force Sonja out the front door. Dorinda compares Sonja to a drunk Godzilla! Stop getting between Sonja and her vagina and she wouldn’t have to behave like that!

The next morning, Luann has left the building again. She left a text thanking Ramona for her hospitality and complaining about her accommodations, again.  Good night from the lower level, she texts.

Dorinda prompt Ramona to call Luann and apologize that she felt slighted. Ramona leaves a rambling apology on her voicemail. There is absolutely zero sincerity in that apology since Dorinda spoonfeeds Ramona what to say.

Sonja wakes up unsure of what happened last night. She thinks she had fun, though. Ramona shared that Lu left at 1 a.m. and went back to her beautiful home .

The other ladies go downstairs to see what Luann was complaining about. We then have a to be continued when the countess calls…

Next week, Luann is hitting on the dog groomer? Wow, there really are slim pickens in NYC. We also see why Leah shouldn’t be drinking…Ramona gets upset since it looks like her home was turned into a frat house! Good times to come! See you all next week and be safe!