RHOM Recap: Julia Has Medical Emergency, and Nicole Confronts Marysol Over Her Allegations, Plus Larsa Launches Her Jewelry Line 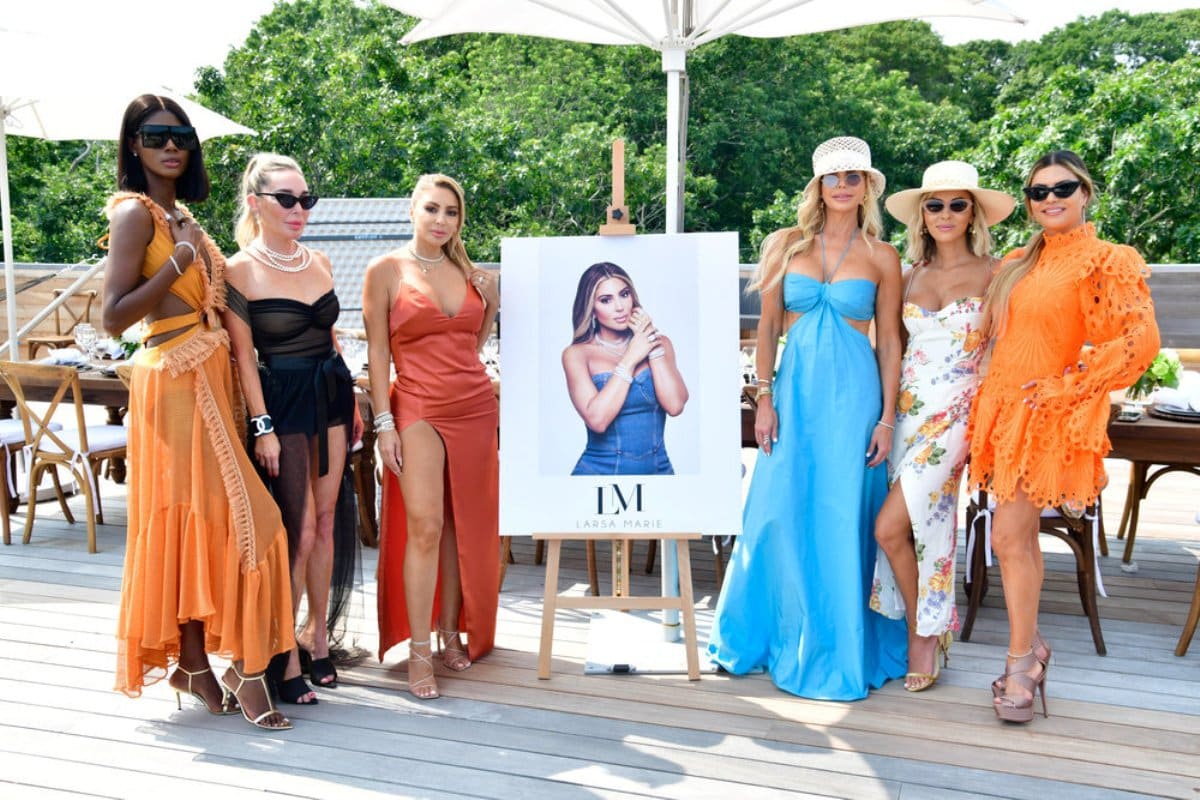 For this episode of the Real Housewives of Miami, we are still in Montauk and will be attending Larsa’s jewelry event. One of our ladies will overindulge to the point of needing medical attention and others will need a frenemy intervention. Let us see who falls into what category, shall we?

We have finally arrived at Larsa’s jewelry event. She is making it seem like she has put a lot of work into her brand, Larsa Marie, but from what we have seen it does not seem too impressive and really overpriced. Side note: I admit I went and checked out her website, and I saw that Kiki was one of the models on it. Kiki is gorgeous, so that was an excellent choice for her brand.

Julia is sick the next morning after partying too hard the night before. She has been throwing up and having diarrhea all night. Julia should not be surprised she ended up in this position after we see the montage of drinking clips from the previous night. She thought she could manage the excessive drinking due to her high Russian tolerance.

Dr. Nicole is called into service and is trying to find something to work in the place of a garbage bag. She can only find a salad bowl for Julia to vomit in. I hope the owners of this rental promptly tossed the bowl upon seeing this scene. Adriana is acting like it is a life-or-death issue and starts calling a “deathbed rescue” service to give Julia an IV.

Alexia convinces her to call 911 since she does it for everything. I am sure Alexia and her family have had a lot of experience with 911. Adriana throws everyone out of the room after calling 911 and pretends like she is the best person to manage this crisis. She does not want to create a circus situation, but she is behaving like the Ringmaster since she is the one who called the paramedics. The paramedics arrive to help Julia, and they are finally able to get her hydrated. Julia ends up checking out okay by the paramedics, so crisis averted.

Larsa’s mojo has been thrown off since Julia chose today to get sick and disrupt her jewelry launch. Guerdy offers to help Larsa with her event since she is not well prepared. Larsa needs all the help she can provide since it resembles a pop-up party on a deck. She only has 25 people who have RSVPed for her event, so that does not seem to be too impressive of a turnout IMO. She has influencers and the press at her event, and the bulk of the guests are the other wives.

Alexia is still stressing over her wedding planning. She must not be too worried if she took this trip when she should be concentrating on finding a venue. Alexia still has work to do in trying to find a resolution between Peter and Todd before uniting their families.

Nicole is planning on clearing the air with Marysol after she called her out the previous day. She wants to address all the rumors that she shared with the other ladies. Lisa is MIA since she is still getting ready for the event and seems to be in her own little Fembot world. Queen Lisa finally arrives and starts arguing with Adriana over who gets the shady spot. Adriana came an hour early to score a shady spot, so she is not willing to share the shade. She then dramatically storms away wearing her orange doilies dress, and she proclaims she should not have to sit in the sun. Adriana thinks she earned it since she saved Julia’s life. #dramaqueen

Alexia then defends Adriana over fighting over the umbrella. She will use any excuse to come after Lisa since she told her that she was cranky earlier. Larsa wants to start carrying muzzles for her line, and her first customer should be Adriana. She is very annoyed by Adriana and her comments about vomit chunks and causing a scene. Larsa claims the event was a success, and she got a Harper’s Bazaar cover for it. She is pleased with herself, and I am frankly surprised she scored that magazine cover. Production shadily shows it was the Vietnam edition.

Julia calls Martina, and she gets her voicemail. She leaves her a message explaining what happened. Julia does not admit to being hungover and really downplays what she did. Adriana already beat her to the punch and called Martina and told her about their “friend engagement” and how she was feeling unwell. Side note: On WWHL, Larsa also mentions that Adriana is totally obsessed with Julia, almost to the point of being inappropriate, which we have all observed this season.

Nicole decides to sit down with Marysol and discuss what is going on with them. She tells her that she and Alexia were very confrontational. Nicole shares that Alexia is not the only one who has had struggles. Marysol asserts that no one has the problems that Alexia has. I must agree with Marysol, but some of Alexia’s wounds are self-inflicted — coddling Peter and marrying a Cocaine Cowboy. Marysol believes the rumors since where there is smoke there is fire. She has appointed herself as the friend protector. Marysol could care less about this nonsense and will not take back what was said. She thinks Nicole is just upset she got exposed for her trash talking. The thirst is real in Miami for these coveted housewife parts, and there is an internal battle going on to score that mojito.

Tonight, we are having a wine and food pairing, and they are also celebrating Lisa’s birthday. Adriana arrives in some sort of gold disco-themed poncho, which is not flattering at all. Julia joins the group after she got properly hydrated, and Adriana acts like she just rose from the dead. She claims it was not alcohol poisoning, but she thinks since the paramedics gave her an EKG, it had to be heart-related. I do not know why Julia is reluctant to admit she drank too much — maybe all her Russian braggadocio is coming back to haunt her.

Kiki decides to ask Lisa, “What is your favorite sexual fantasy?” Lisa says her fantasy is Lenny since she is dreaming about him right now. She is only dreaming about Lenny’s bank account and future earnings. There are crickets when she asks the ladies, “Isn’t Lenny cute?” Everyone in their ITMs showed their true feelings on that comment. Alexia asks Lisa, “Who is your free pass?” Lisa swoons and says it is Channing Tatum. LOL, Julia is not sure if Channing is male or female. Nicole says her choice would be John Mayer. See, I told you all — she even has a boring free pass choice! Marysol, in her ITM, shares that something salacious is going to come out about Nicole. Please do tell!

Adriana grossly describes getting wet dreams from Brad Pitt. Guerdy and her husband have had sex on a hill in Jamaica while a security guard watched them. She even breaks the fourth wall in her ITM and thinks even Andy Cohen would want to watch that sexy action. Alexia is into Luis Miguel. She saw him at the Beverly Hills Hotel, and she claims she had the opportunity to fool around with him. Alexia only stopped because of her loyalty to Herman.

Larsa says her fantasies have all come to fruition. She had fantasies about athletes and actors. Well, we know she married the athlete but who, pray tell, is the actor? Larsa, who is slow on the uptake, is asked for his initials, and it takes her a minute or two to share they were MJ. Guerdy thinks it is Michael B. Jordan since his initials are MJ. Larsa is not willing to give it up at this point.

Larsa hired a DJ for Lisa’s birthday celebration. The ladies decide to end the night with more cocktails and dancing. It looks like they all survived another girls’ trip without any casualties. Larsa blames the lows of the trip on Adriana, and based upon her appearance on WWHL, they go at it at the reunion. Please check out what she wore on the show that night — it looks like a Black Widow costume. Marysol summed up their trip well by referencing Squid Game since the whole trip has turned into a game of survival.

Next week, we have Guerdy’s event for Haiti! Adriana and Larsa battle it out over the size of Kanye’s d*ck? Larsa’s BFF Kim K. will not like this being the topic of conversation. I hope all of you Blurbers have a great weekend!