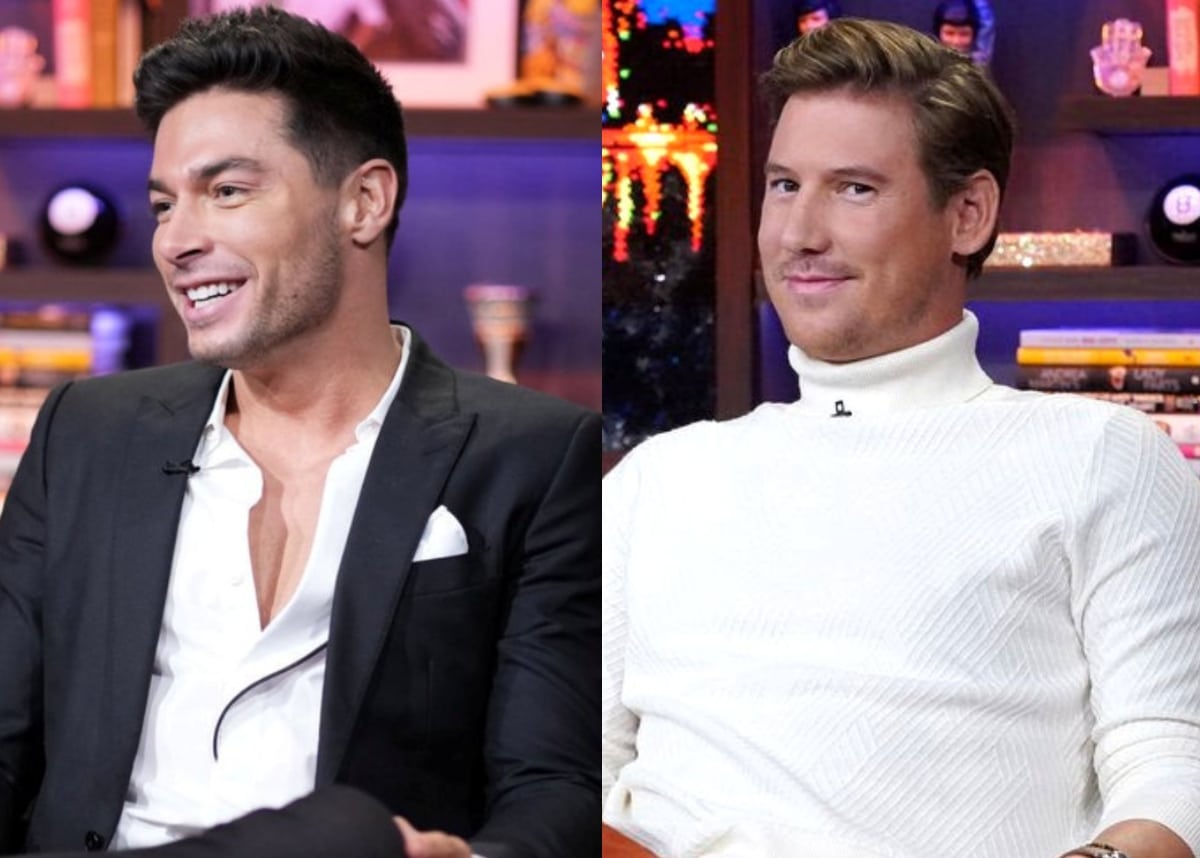 Last summer, Austen Kroll bounced from Ciara Miller to Lindsay Hubbard, prolonging the controversial love triangle. Fans of Summer House rallied against the 35-year-old, who was accused of stirring the pot.

To make matters worse, certain cast members gave Austen a pass, choosing to blame Lindsay instead. This stoked the wrath of the fanbase, who wanted Austen to pay for his sins. Some viewers prayed to the Bravo gods, asking for him to be fired.

In an interview for the Behind the Velvet Rope With David Yontef podcast, castmate Andrea Denver shared that he spoke with Austen several times about the issues of that summer. “I know we talk about this so many times I feel so bad,” said the model.

“Listen, I think he pushed maybe a little bit too hard the accelerator on the car when he came to Summer House,” Andrea explained. “I think he should have stopped a little bit before in all of that triangle, but yeah, I feel bad for him because he got really demonized by so many people and I think he is a good guy. I mean – I know he’s a good guy. I don’t think he deserved that social media hate that he got, but he definitely made a few mistakes. And I think he’s aware of it.”

In the past, Andrea himself was a target on social media when he was accused of misleading Paige DeSorbo on Winter House. “Listen, I understand because you got to put yourself in everybody’s shoes,” said the 31-year-old. “I did not have the best rep after Winter House because you know… [Kroll] made some mistakes. Same as me. I said certain things on Winter House. I take full responsibility of that.”

When asked if Austen regrets appearing on Summer House, Andrea responded: “One hundred percent. He does. Yes, he said he wishes he never would have come for Lindsey’s birthday.”

“But at the end of the day, they were all three single,” said Andrea. “So they could do whatever they wanted. But he should have been more straight-up towards Ciara maybe. And let her know how he was feeling about the whole situation. And he just wanted to have fun and wasn’t looking for anything serious. I think he was trying to put his feet in both shoes. And I think that was pretty bad.”

He then expressed, “I think there should have been just more delegating between the two ladies… But once again, I don’t want to point the fingers at anyone. They were all single. So everybody had the reasons and you gotta respect everybody’s point of view.”

On the topic of his co-stars Lindsay and Carl Radke, who are currently dating and living together, Andrea predicts they will be engaged by the end of this summer.

“I wouldn’t be surprised if Carl and Lindsay [get engaged] before the end of the summer,” he shared. “They’re moving fast, but at the same time, you can’t blame it on them because they know each other from so long. So I’m pretty sure that they know what they’re doing. And as I said, they are really happy and I wouldn’t be surprised they’re gonna get engaged, which would also make sense cause it would be kind of be like a year after they start like dating approximately. So it would make total sense.”

Andrea also addressed his friendship with a different star — a singer named Madonna.

According to Andrea, the “Material Girl” saw him in the background of a music video. After tagging him in a photo, she started following him online.

Andrea described Madonna as the “nicest.”

At the start of their friendship, he was surprised she noticed him. “Even though my role was really small, you can barely see me [in the video]. You seen me more in the backstage video than in the actual video. But it’s funny because I had no clue I was on a photo shoot, minding my own business, taking a picture,” he said, via Showbiz Cheat Sheet.

“And my phones are blowing because everybody was texting me from Italy. They were texting me from the US like, oh my gosh, Madonna just posted you, she just tagged you. She just followed you,” said the star.

He also addressed a rumor that they were lovers. “She literally tagged me and start following me. So it was pretty, it was a pretty nice experience,” he shared. “Then they made up all that story about TMZ that I said that I would date her and stuff. I never said that. I said that I was feeling flattered because, Madonna is such an icon.”

Andrea explained, “I grew up with Madonna and think she’s a beautiful woman… Don’t get me wrong. But you know, like it was more like, I was really happy and flattered that she, she posted them and she appreciated, I mean, I never said that I was going to date her.”

Their friendship lasted about four years. “We started chatting,” he said. “We talk about many things we talk about Italy. We talk about family, because she’s a great mom to her children. Like a couple of her children were also on set when we filmed the video… She gave me a lot of life advice, which was great.”

“I remember like maybe a year ago I started going through those texts. I was just curious. And there was like so much advice that she was giving me and I was probably just immature and I didn’t see it that way,” said Andrea. “I wish I would have made treasure of all that stuff that she said before.”

Andrea added, “She was really nice, really, really sweet person and really a lot of fun. She always say, I remember this: She said, ‘You’re better than being just a male model … Get out of there and you can do so much more.’”