Home Real Housewives of Orange County News RHOC’s Tamra Judge’s Daughter Sidney Blasts Her: “She Was No Mother to Me”

RHOC’s Tamra Judge’s Daughter Sidney Blasts Her: “She Was No Mother to Me” 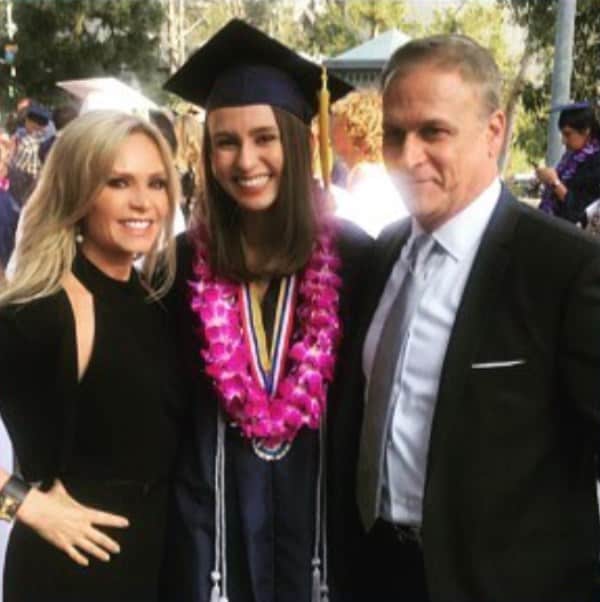 In today’s sad news, it seems all is still not well between Real Housewives of Orange County star Tamra Judge and her daughter Sidney Barney.

There had been an ongoing drift between the mother and daughter for years now following Tamra’s divorce from ex Simon Barney.  Tamra however posted a photo back in June of herself at Sidney’s high school graduation with Simon seeming to imply things were getting better.

Fast forward to today and Sidney, 18, put her mother on blast with a Facebook post making it clear their relationship is still extremely rocky and even stating that Tamra was no mother to her, in addition to describing her actions as “toxic” and “neglectful” while also adding that Tamra was “mentally and emotionally abusive”. Wowzers.

Sidney first states that following her parents’ separation in 2010, she took her Mom’s side and didn’t decide to go live with Simon until 2013 due to Tamra’s own actions.

“The reasons I left my mothers house are that she was neglectful (leaving us at home with no food or simply ignoring us entirely), she constantly put herself first and the biggest reason was that she was mentally and emotionally abusive. She was no mother to me. This was an unhealthy environment for all of us kids and unfortunately I was the only one to recognize this and take steps to get out of that toxic environment,” said Sidney.

Sidney adds, “I have explained this to her numerous times in court, in therapy, and when we would meet up that the ONLY reason I am not living with her is because she continues to do the things that pushed me out of her house, like talking about me on the show/press/social media, doing embarrassing things on the show, lying to me and putting herself first to name a few.”

Tamra’s daughter goes on to explain that despite being forced by the courts to go to therapy with her mom for 3 years, it didn’t help matters much as Tamra would not take responsibility for her behavior. Sidney goes on to absolve Simon of any blame in the demise of her relationship with her mother stating it was Simon who forced her to invite Tamra to her recent graduation.

“My father has pushed me to have a relationship with my mother forcing me to go meet her in and out of therapy. He even forced me to let her come to my graduation because it was a milestone. When I told my mother that she could come I gave her a few conditions. All I asked was that she remains cordial with my father and my stepmom and to not post anything about my graduation, anywhere,” wrote Sidney.

Sidney goes on to add that Tamra however did not adhere to her wishes of keeping their relationship private. She continued, “Not even two weeks after I graduated she posted a photo of me and shared it with her one million followers knowing that it would get picked up by the press. The one thing I asked and have been asking for 4 years now has been to not talk about me because I don’t want to be in the spotlight. But Again breaking her promises as per usual, she puts herself, her fame, her reputation, and her bank account before me. If she really wanted a relationship she would keep her promises and recognize that it is no one else’s fault but hers that I do not want her in my life.”

To wrap up her Facebook post, Sidney states that while she doesn’t want to be in the public eye, she did however feel the need to clear the air.

Sidney continues, “Although I do not want to be in the public eye, I felt the need to clear these lies up and set the record straight in hopes that it will straighten my mom out so that she is held accountable and is forced to do the right thing. My mom has been portraying the innocent erased mother whose daughter was estranged from her due to divorce and an evil ex husband when in actuality she is the sole reason why I do not want her in my life and will not have a relationship with her. Instead of playing the innocent erased mother character, she could’ve been trying to actually fix our relationship and change her ways. However the character keeps her relevant, and is her only storyline. Why would she actually try to get me back? Without the estrangements she is no longer pitied and talked about and her fame and fortune go down the tubes.” 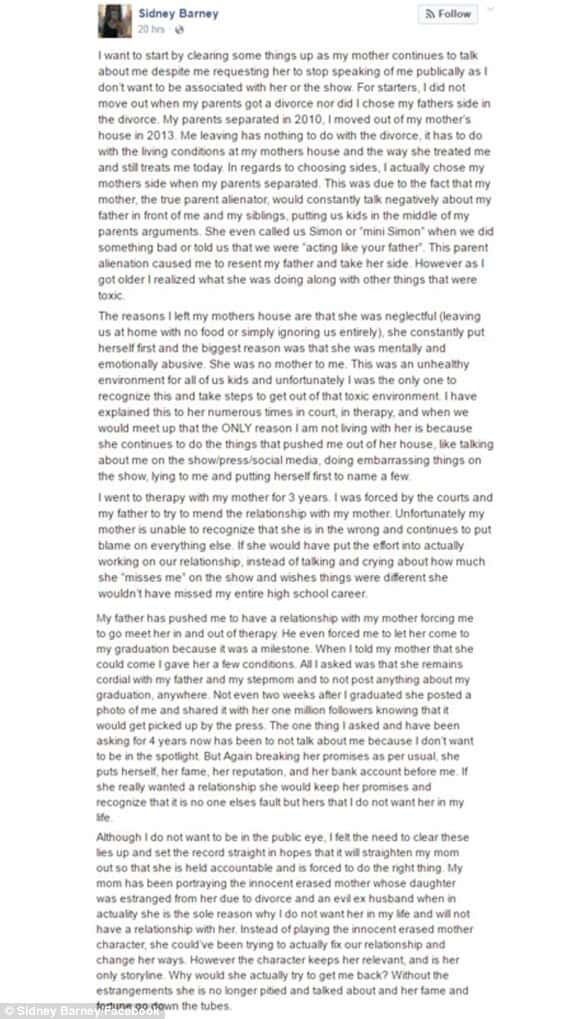 As for Tamra, 49, she seems to be attempting to take the high road by simply retweeting a post on Twitter that appears to lay the blame of her troubles with her daughter solely at the feet of her ex Simon.

@TamraBarney Our family has been going through this for 10yrs. Thank you for shedding light on this subject. pic.twitter.com/zI2ggC463W

It’s a bit hard to determine what triggered Sidney’s post but I must say it’s extremely sad to see this being aired out on social media. If Tamra posted the pictures from the graduation (posted below) despite Sidney telling her not to, then yes that is very wrong. However I must say I don’t think that should have brought about such vitriol from her daughter. While Sidney is an adult, I do have to wonder if Simon had any influence on what she chose to post cause numerous times in the post, she seems to attempt to make Simon look good while putting down Tamra.

My advice to Sidney is yes Tamra is a hot mess who does do embarrassing things on reality TV but none of us have perfect parents. Sometimes you just have to learn to accept them for what they are as long as it’s not detrimental to your well being. Here’s to hoping things will ultimately get better between Tamra and her daughter. 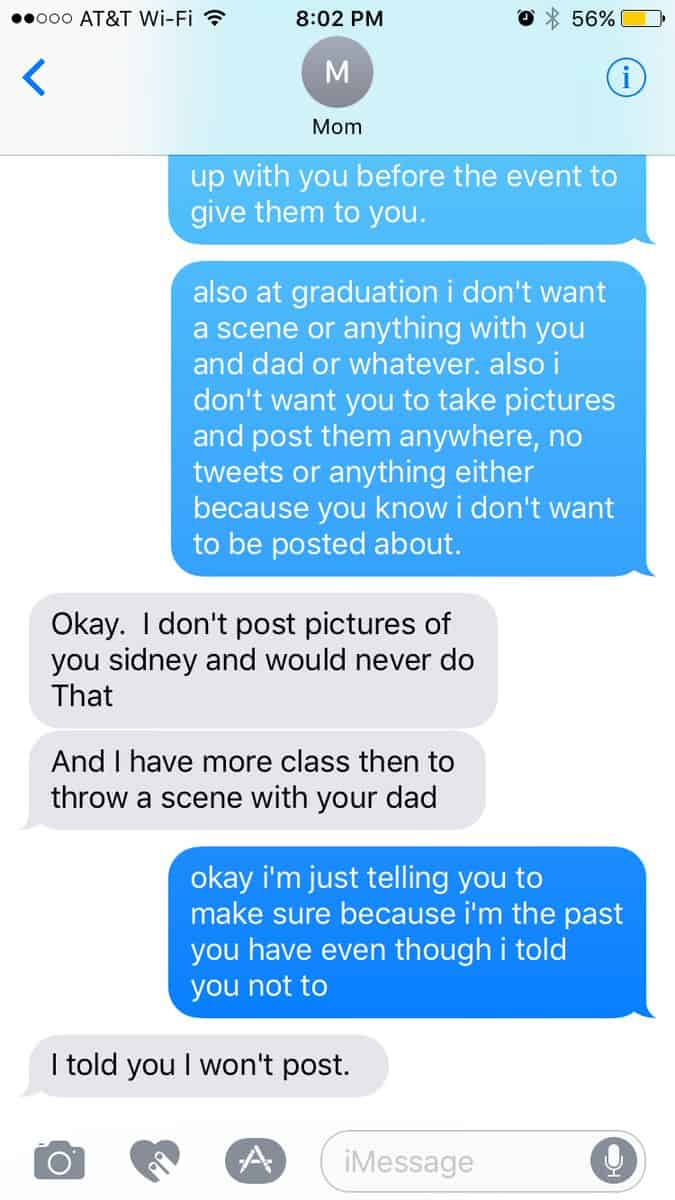 Sidney also posted this text message exchange with Mom Tamra which showed her promising not to post her photos.