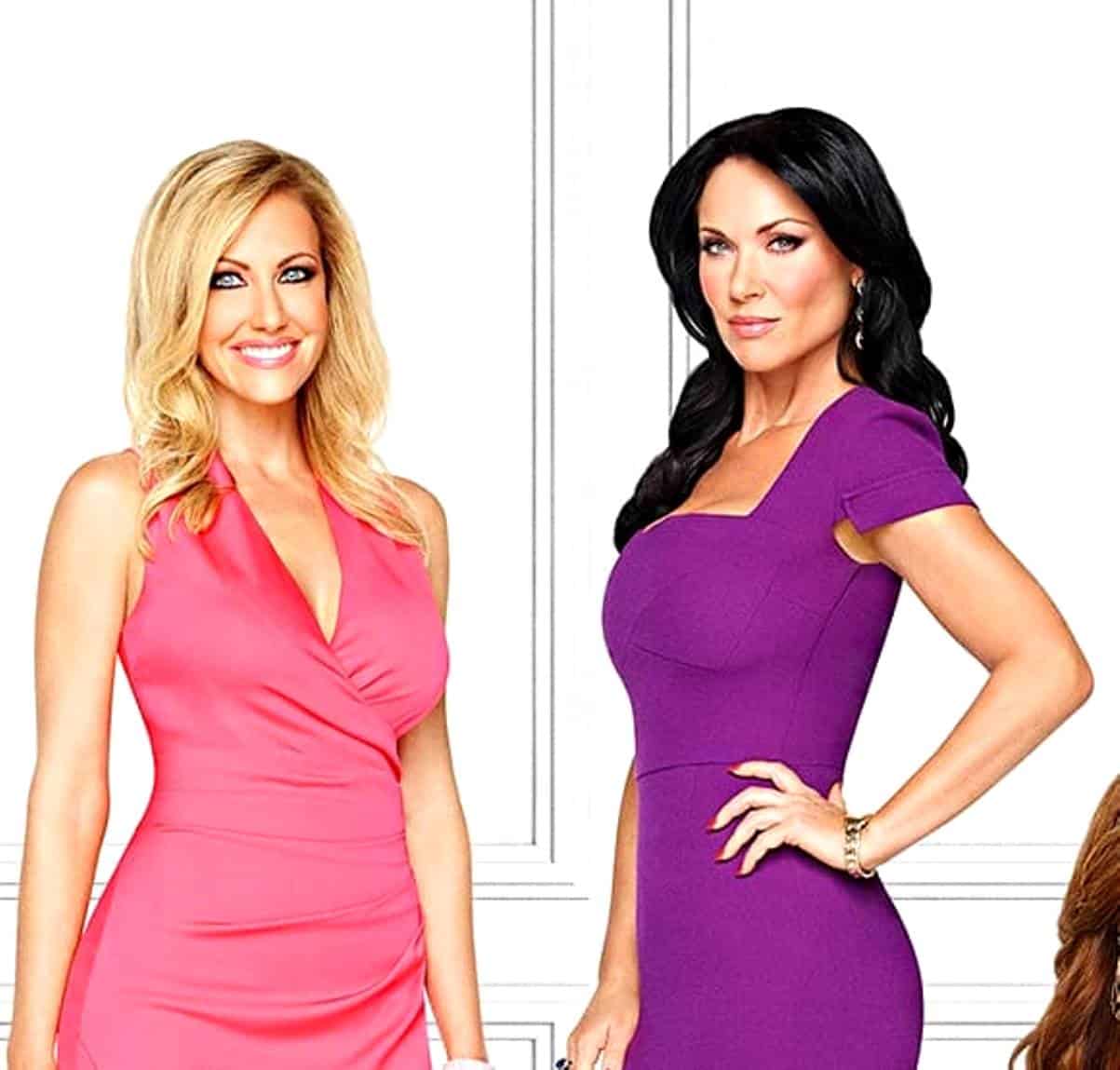 We’re just a few episodes into the second season of the Real Housewives of Dallas, and it appears things are already getting very ugly between some of the cast members!

In fact LeeAnne Locken has now decided to block castmate Stephanie Hollman on Twitter after the two ladies got into a nasty war of words. Stephanie’s husband Travis Hollman wasn’t spared as he was also blocked!

The drama started Monday night as Stephanie made some tweets calling LeeAnne a “bully” due to her behavior on that episode of the RHOD. If you recall, Stephanie invited LeeAnne to her Halloween party, and LeeAnne proceeded to come dressed in a two-faced costume and tell others she was dressed as Stephanie!

When fans tweeted Stephanie about LeeAnne’s behavior, Stephanie responded, “Makes me sad ? #RHOD #bully”.  And to another fan calling out LeeAnne, she responded: “Her true colors are showing! Hurts my heart! #RHOD”.  Those tweets are below – 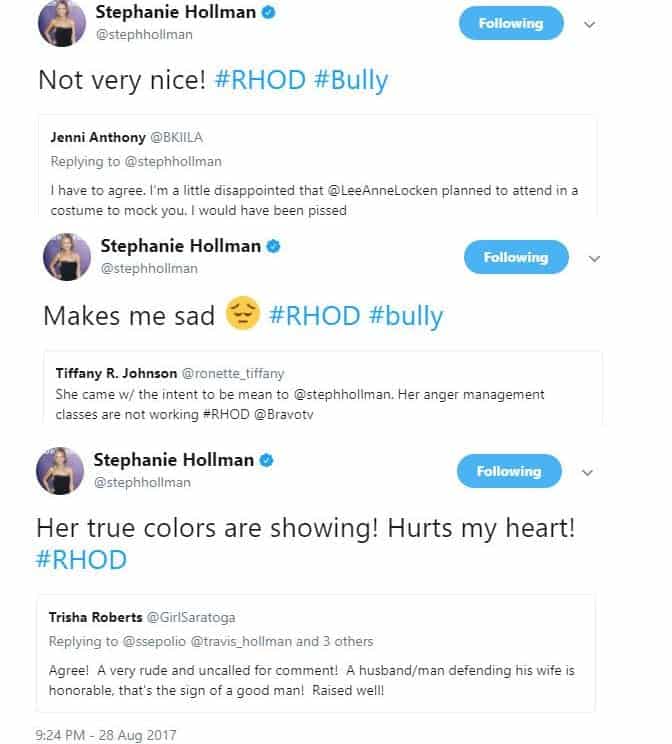 LeeAnne decided to directly respond to Stephanie’s tweets after Stephanie tweeted, “Sometimes no reaction is the best reaction. Can’t give a bully what they want! #RHOD“.   LeeAnne replied, “I apologized to you THAT NIGHT! Remember?” 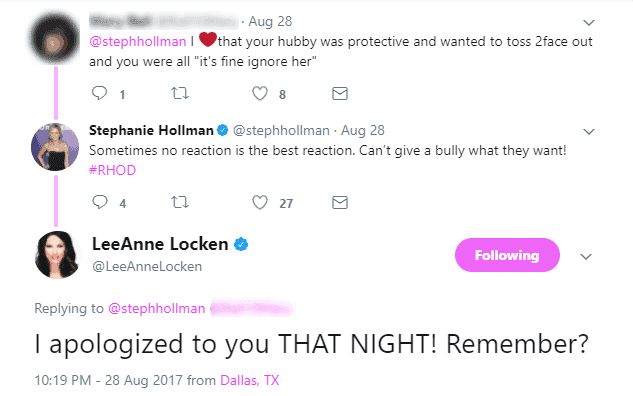 LeeAnne then apparently started to receive a lot of backlash on Twitter and seemed to blame Stephanie for it.

LeeAnne tweeted, “Her FAKE HURT has generated a ton of MALICIOUS HATE purposely towards me tonight!” Later adding, “Where it went to far was the claims of STILL BEING HURT last night on twitter. I apologized to her THAT NIGHT. We moved on. Or did we?” 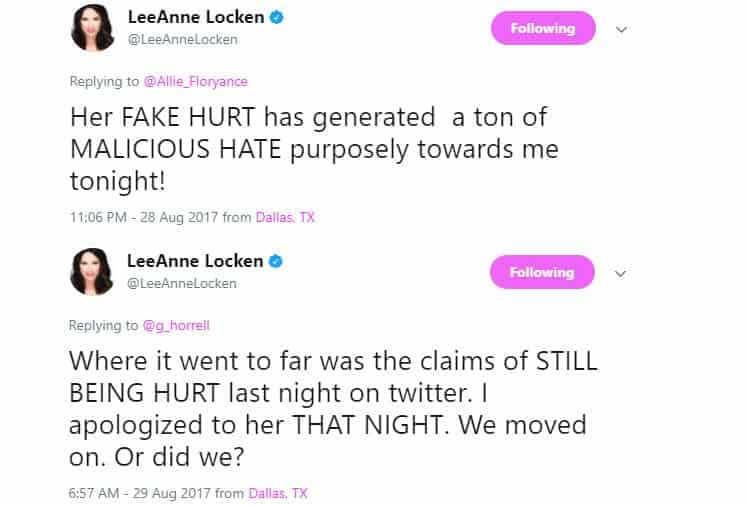 Then yesterday both Stephanie and her husband Travis tweeted that LeeAnne had blocked them on the Twitter!

Stephanie tweeted yesterday, “I’m sorry I can’t reply to some of your tweets, Leeanne blocked me so I can’t read the full convo ? Imagine my excitement for the reunion!”

Stephanie’s hubby Travis then shared the screenshot below showing the he had also been blocked by LeeAnne. Their castmate Cary Deuber also chimed in by tweeting to Travis: “I love that she blocked you on Twitter, but you didn’t block her from coming into your home for Halloween ?” 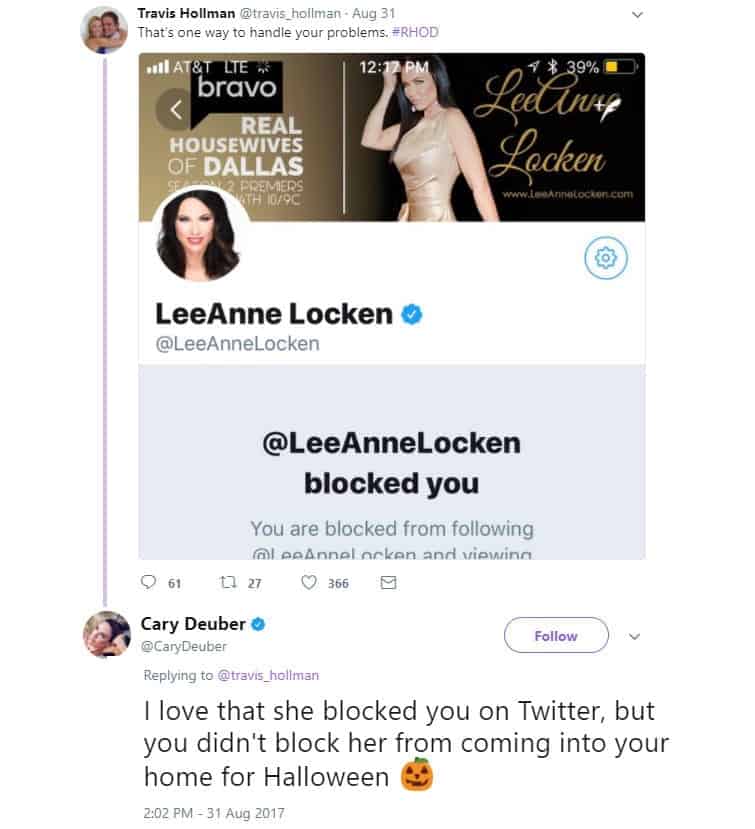 Travis responded to Cary saying it’s unlikely LeeAnne will be stepping foot in his home again! He tweeted, “I can tell you this much, she’s not coming back in my house!”

When RHOD fans confronted LeeAnne on blocking Stephanie. She did not shy away from it and revealed why she did it!

LeeAnne tweeted, “Yes, I did block her because of the hate she was trying to toss in my direction!!! I don’t need to hear anymore of her lies. ??”  She later added, “Thank you very much!! I think her type of attention seeking is sad!! Texas has SERIOUS PROBLEMS right now & that is what I’m focused on!???” after a fan showed her support. 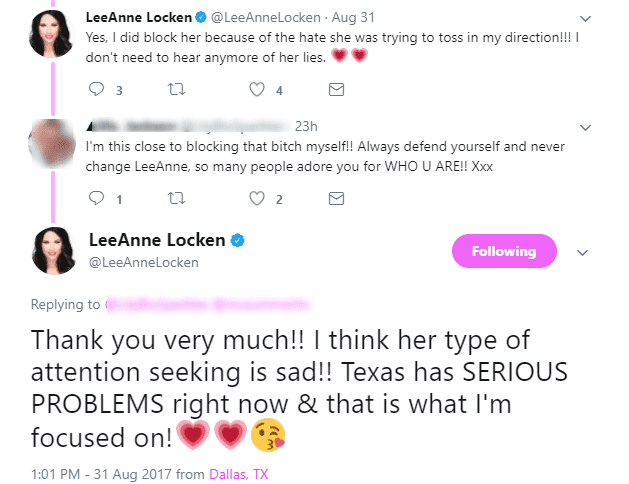 So did this Twitter war end following yesterday’s blocking drama? Of course not!  LeeAnne and Stephanie were still going at it today. Below is that exchange from just hours ago –

In LeeAnne’s defense, and she really needs one, some of her frustration stems from the fact that Stephanie tweeted back on June 22 (after Bravo released the trailer) that she loved LeeAnne’s costume. In fact LeeAnne shared a screenshot of Stephanie’s tweet adding, “I NEVER bully anyone!! She LOVED the costume in REAL LIFE! Here look…”  That screenshot is below – 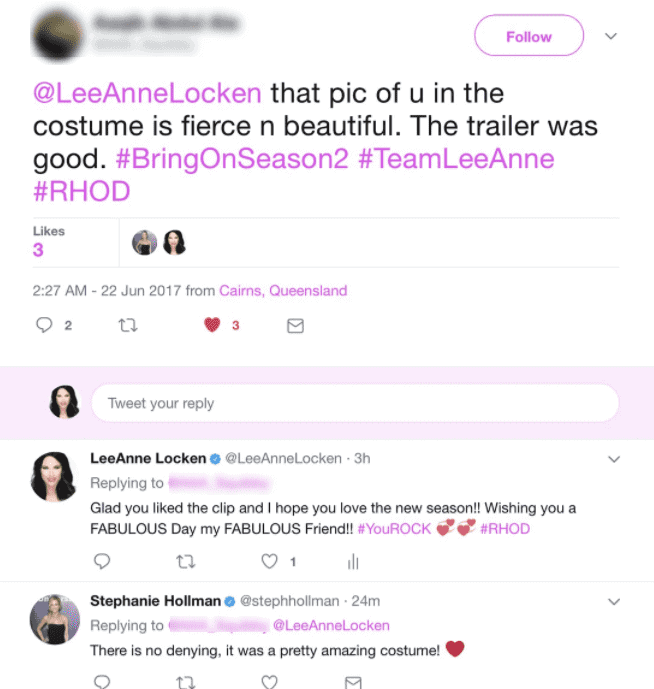 LeeAnne’s upset cause back in June, Stephanie praised her two-faced costume!

Whew! Must say I am exhausted keeping up with all this drama. Would love to hear your thoughts!