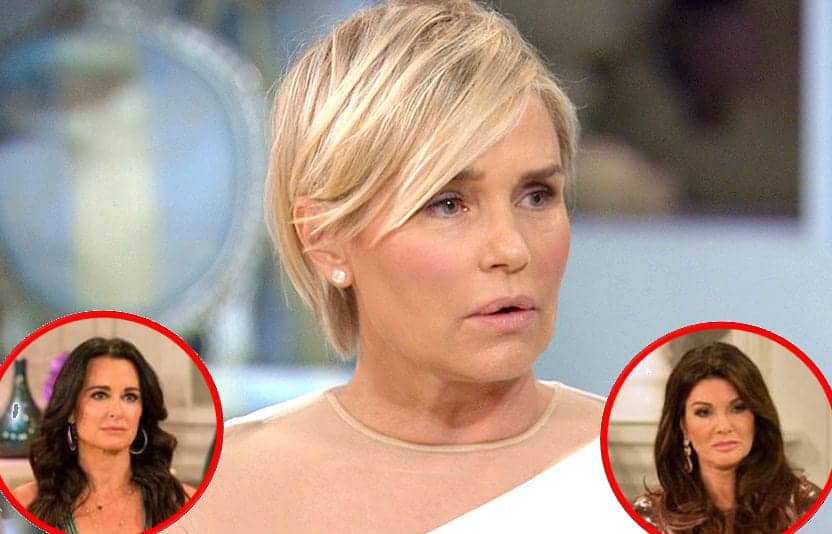 Former Real Housewives of Beverly Hills star Yolanda Hadid is baring it all in her new book!

Following her revelation of how her ex-husband David Foster dumped her over the phone, Yolanda also writes about her former RHOBH costars, and by writing we mean mostly slamming them!

First Yolanda, 53, talks about her naivete when she first joined the show in her new memoir Believe Me: My Battle with the Invisible Disability of Lyme Disease.

“When I begin filming around March, I have no clue about the vortex of drama I’m about to step into,” Yolanda writes.  “The dynamics in this group of women are challenging because they have a lot of history that doesn’t include me.”

Yolanda goes on to reveal her surprise at how her RHOBH costars had no interest in befriending her when the cameras were not rolling!

“I’ve met Lisa [Vanderpump] two or three times at Mohamed [Hadid]’s house, but I’m not actually friends with any of the women,” she writes. “Interestingly, none of them really care about interacting with me off camera.”

Yolanda didn’t end there as she then shared an incident during season 4 when she fell ill at Kyle Richards‘ home and didn’t get support from Kyle or the rest of her castmates.

“One time, the cast and I are doing a magazine shoot at Kyle Richards’ house,” writes Yolanda. “I haven’t driven a driven a car since my accident, so thank God Alberto can take me. I’m having a really bad day with that earth-pulling exhaustion, where I cant even put one foot in front of the other. Rather than go into Kyle’s house, where all the girls are doing hair and makeup, I choose to lie down in the backseat of the car to conserve my energy until they’re ready for me on set.”

She continued, “It’s strange to me, because if someone was sitting in my driveway and not feeling well, I would go out and say, ‘How are you? Why don’t you come into the house, take the guest room, and relax until we start?’” she added. “But Brandi Glanville is the only cast mate who comes outside to see me. Nobody else goes near my car, not even to offer a glass of water.”

Yolanda added her disappointment with Lisa Vanderpump who she claims “seemed to only be [her] friend more when the cameras are rolling and not when they aren’t.” She recalls Lisa citing a busy schedule for not being able to visit her more often off-screen, but she then made time to attend David Foster‘s Hollywood Walk of Fame celebration during the week.

“This is when I realized she is a different kind of friend, a Hollywood friend,” Yolanda writes of Lisa V.

Yolanda also calls out her former costars for doubting her illness and accusing her of having Munchausen. Lisa Rinna was at the forefront of the Munchausen allegations.

“These women lack much knowledge and consciousness,” she writes. “I hear that the women use the word ‘Munchausen’ in relation to my illness during filming. That is such a hurtful word, it infuriates me. Why would anyone make such a distorted and untrue statement related to my health journey? Especially in front of my friends and millions of viewers? It’s simply unconscionable that my supposed ‘friends’ doubt and discredit my word on such a delicate and sensitive matter.”

Finally Yolanda opens up about why she pulled back from the cast.

“Without cameras rolling, I clearly feel the lack of compassion of this group of women,” Yolanda writes of the cast. “They are my coworkers on a reality TV show, which, although it may seem more glamorous and interesting, is no different from a job at a bank. There, you see your coworkers during business hours and maybe have a coffee with them once in a while, but you don’t share your private life with any of them. This is how it is with the women on the show.”

TELL US – WHAT ARE YOUR THOUGHTS ON YOLANDA’S COMMENTS ON HER FORMER COSTARS?