RHOBH’s Yolanda Hadid Reveals How Ex-Husband David Foster Dumped Her Over the Phone! 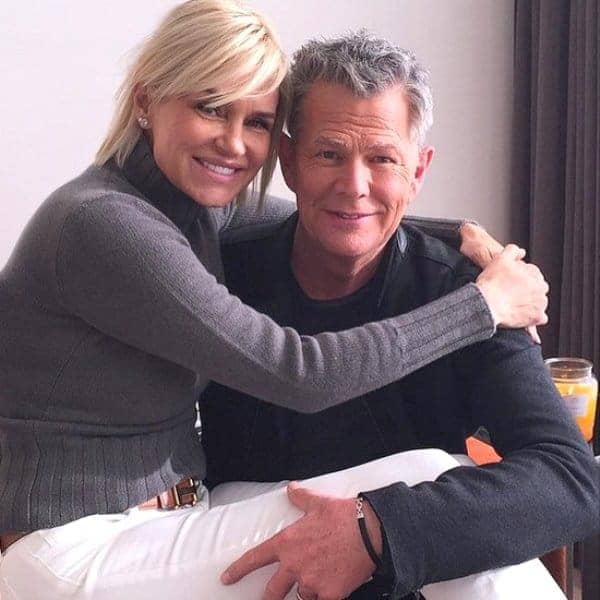 Yolanda Hadid is baring all in her upcoming memoir as she opens up about being dumped by ex-husband David Foster.

In her new book Believe Me: My Battle with the Invisible Disability of Lyme Disease, the former Real Housewives of Beverly Hills star reveals how she learned her marriage was over via a phone call following David’s birthday! Yikes.

“November first is David’s birthday, and he wants to celebrate by seeing a Lakers game at the Staples Center,” Yolanda wrote in newly released excerpts from her book. “It’s a loud, high-energy event with almost nineteen thousand attendees but all that matters to me is that the birthday boy is happy. We have a nice sit-down dinner at the venue and what I thought was a pretty good night.”

Yolanda, 53, recalls going to the store the next day and calling her then husband David, 67, to see if he wanted anything. Their conversation however did not go as she had hoped.

“’Good morning, my love,’ I say,” she wrote. “’I’m going to the store. Do you want anything special for tonight?’”

“’No. I’m going out with my daughters. And we need to talk,’ David replies in a tone so cold that shivers run through my body.”

YOLANDA HADID REVEALS SHE HAD SUICIDAL THOUGHTS DUE TO LYME DISEASE

“’Are you okay?’ I ask. He mumbles an answer, then quickly ends the conversation,” Yolanda continued. “My stomach sinks and anxiety sets in. Even though I don’t know what he is referring to, my gut tells me that it’s bad.”

Yolanda reveals she asked David what was wrong and he then proceeded to break the bad news to her that their marriage is over.

“’I can’t do this anymore,’ said David via phone. ‘But we’ll discuss it tonight.’”

Yolanda adds that David ignored her all day until he returned home following dinner with his daughters.

“I try to talk to him but it immediately turns into a fight,” wrote Yolanda. “I assume that his birthday made him realize that he has two separate lives: one with his sick wife and another with his daughters….unfortunately this is the same old ‘Foster Movie’ and I am just the new leading lady.”

David moved out following their break up and started staying at a hotel. A few weeks later, Yolanda recalled David returning to their apartment to get new clothes during which they argued and he told her that her “sick card is up”.

Yolanda eventually moved out of their apartment weeks after she got a letter from David’s lawyer informing her that they were legally separated.

TELL US – ARE YOU SHOCKED TO READ HOW DAVID DUMPED YOLANDA?