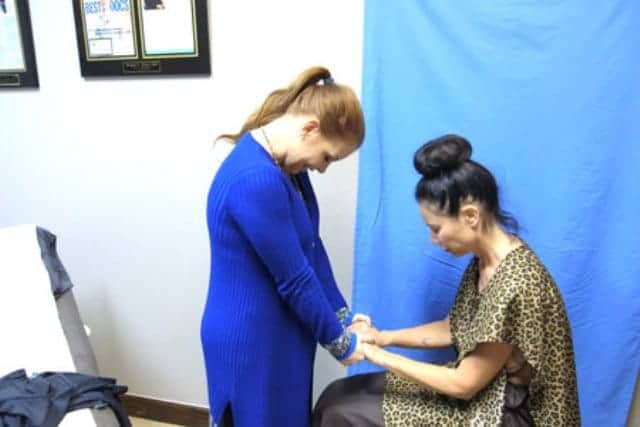 This week’s episode of the Real Housewives of Dallas was one for the books thanks to LeeAnne Locken’s bizarre conversation with cast mate Brandi Redmond right before her surgery, during which she threatened their costar Cary Deuber while going on a rant about her hands and knives!

While LeeAnne has blamed being under the influence of meds for her words and actions, Brandi doesn’t seem to be buying it as she calls the conversation the most uncomfortable moment she’s ever had with anyone in her life, adding that LeeAnne’s behavior is “not normal.”

Below are excerpts from Brandi’s Bravo blog –

“Oh boy, oh my was it early taking LeeAnne Locken to her surgery. I was up by 3 AM because I kept waking up looking at the clock to make sure I was there for her. It was important for me to show her that I do care about her and this was an act of doing so. Especially after the honest tea and it was clear that I was the only one that could see the pain she was in from being that little girl left behind by her mother – which carried into her feelings of being left behind from Memphis. I arrived at LeeAnne’s around 5 AM and waited in her driveway for over an hour and a half for her to come out. This is why I felt she was nervous. If you’re anxious or excited, your usually an overachiever on time, or at least that’s me. On the way to surgery, I tried to talk about funny surgery options but I could tell LeeAnne was not in the mood for my humor. She went straight in talking about the Cary Deuber comments. I kept trying to reassure her that Cary is all talk and she is like any other business, they want to be and think they are the best. I mean this with all due respect. I’m a huge fan of the Dallas Cowboys and even if we are having a losing season, I will still say we are the best. By no means, do I discredit Cary and her profession, I just look at it from a pride standpoint.

After the medical team left the prep room, LeeAnne stormed over in my face, butt ass naked with spit flying in my face and said what she said as I held my breath. I was uncomfortable, nervous, and speechless. It was the most uncomfortable private moment with anyone I’ve ever had. She seemed so cold and desperate for me to feel her anger. I honestly am put in a horrible situation over this and I have no idea why LeeAnne has to take things so far to the point that she becomes unpredictable and unrelatable. I mean, how many times do most people have to tell another friend that another wants to harm them? #notnormal

I decided to tell Cary about LeeAnne because if the roles were reversed, I would want to know and to be prepared. Let’s be honest, it’s not LeeAnne’s first threat towards harming someone. (aka Marie, police reports).”

Brandi also shockingly reveals there was something her BFF Stephanie Hollman said on the latest episode that she found “a bit hurtful”.  Below is an excerpt –

“Moving along, I got very emotional watching Stephanie Hollman talk about Cruz and his struggling. Having been a child that was diagnosed with learning disabilities myself, I completely can relate on a personal level but to go through this experience with your child has to be even harder.

My heart broke and confusion did set in when Stephanie voiced that she missed seeing the signs having been focused so much on my personal issues. I do find this statement to be a little bit hurtful. Both Cruz and Brinkley were three years old when I went through my marital issues and by the time Cruz was four  – his birthday is in June – I had renewed my vows. This hurts me deeply to feel blamed for Stephanie not seeing the signs of her child. I think this reflects back on the year (Cruz being four) where I felt she wanted to be more in society (not a social climber) but traveling to promote their business and charitable causes, so please do not deflect you missing signs of your child on me when this is clearly not the case. I love Stephanie and she is my best friend but this hurts me deeply and feels like an open wound. However, the most important fact is that Cruz is where he needs to be now and is thriving. I love that little man to the moon.”

Finally Brandi talks newbie Kameron Westcott as the two continue to just not get along or even get each other! Brandi feels that Kameron needs to loosen up and take the stick out of her you know what!

“And so now, we are going to Mexico… Who doesn’t love fun, tequila, margaritas, good jokes, dancing and being with friends?!!! My agenda was to have a fantastic time! I was ready to be friends with Kameron Westcott, too. Maybe this will be good to be in Mexico without the DFW boundary check 🙂 I happily wanted to be myself around Kameron too, so when Cary asked me to tell her about LeeAnne, I did. She seemed like, “Oh My scary!” I appreciated Cary telling me that I’m a good friend because I do try to be a friend to everyone but sometimes my humor gets me in trouble. Leading me to the compact situation…

Upon arrival at the airport, I was asking LeeAnne how she was feeling etc. and she told Stephanie and I that her doctor told her to buy a compact from the pharmacy and tape it to her chest under her breasts to hold it down to prevent a bulge when healing. I thought it was hysterical. I mean, come on who doesn’t think that’s the greatest medical advice ever? You can touch yourself up on the go with no digging in your makeup bag. GENIUS, I’m going to my doctor to complain that I didn’t get this medical advice. Of course, Kameron didn’t think it was funny. She needs to take the stick out of her a** and loosen up. IT WAS A JOKE! I don’t care who you are — if you had your boob job, tummy tuck, and your doctor said that I would still think it’s comical and very sanitary! Lol

Anyways, so I am not surprised that Mrs. Westcott has something to say about the joking. I just wish she could have a sense of humor for once and not care about material things and status. Yep, She’s One Of Those Gurrls! (no pun intended)”

TELL US – WHAT ARE YOUR THOUGHTS ON BRANDI’S LATEST BLOG?