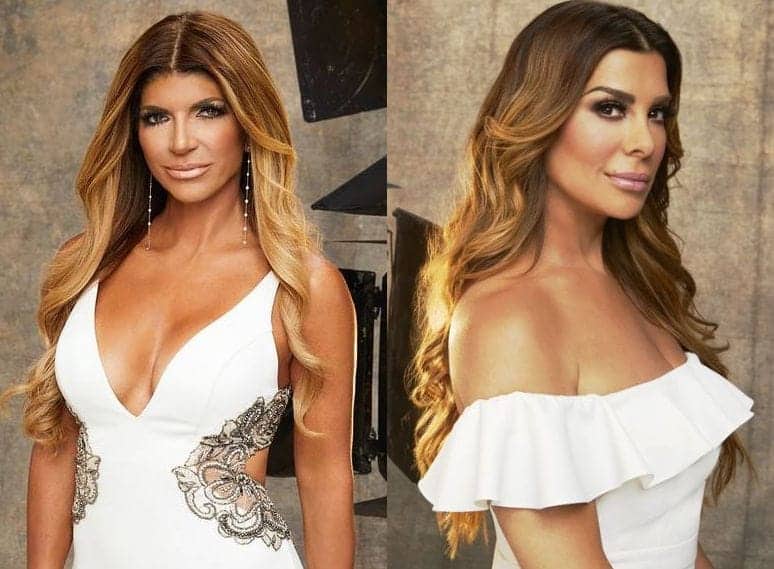 We’re only two episodes into the new season of the Real Housewives of New Jersey, and things are already heating up thanks to CakeGate!

In her latest blog, Siggy Flicker isn’t backing down when it comes to some of her castmates, Teresa Giudice and Melissa Gorga, having a cake fight with the cake that she provided during their vacation. Siggy also spends most of her blog slamming newcomer Margaret Josephs while also saving some of her anger for Danielle Staub!

First Teresa reveals how she felt when Siggy referred to her and Melissa as “animals” and she surprisingly says it was wrong for Margaret to exclude Siggy and Dolores Catania from the memorial.

Below are excerpts from Teresa’s Bravo blog –

“This episode started out with the aftermath of “Cake-Gate.” I really wasn’t happy watching as Siggy called Melissa and I “animals.” Just like Siggy thought us throwing the cake was in poor taste, I thought what she said about us was also in poor taste. The next morning when we woke up (a little hungover, I might add), we went to the beach where I did yoga with Melissa, Danielle, and Margaret. At that time, I had no idea where Siggy and Dolores were. After doing yoga, Margaret arranged a beautiful ceremony as a tribute to my mother and everyone else who had lost a loved one. Melissa paid tribute to her father, Danielle paid tribute to her mother, and Margaret paid tribute to her grandmother.

Looking back, I wish Siggy and Dolores had been there. I still don’t know if Margaret invited them and they declined or if they were excluded altogether. If they were excluded, I think that was wrong, regardless of how I felt about the night before. The tension between Margaret and Siggy is definitely building, and it’s only the second episode. I love Siggy, and I’m just getting to know Margaret, so this is a situation that is difficult for me. You will have to stay tuned to see how it plays out.”

Moving on to Siggy who reveals she doesn’t understand why Margaret, someone she invited into the group, decided to exclude her and Dolores from the memorial she planned for Teresa & co., especially Margaret had only known them for 48 hours.

Below are excerpts from Siggy’s Bravo blog –

“Less than 48 hours after introducing Margaret to our group, I am being told how I should feel and what I can’t say. Margaret can’t pass up an opportunity to add fuel to the fire and cause division among my friends.

While I continued to invite Margaret to the activities I planned, she didn’t feel the need to reciprocate. She organized a memorial for Teresa’s mother, ordered a wreath and booked a paddle board instructor from my beach club—my private beach club—and never said a word to me. Me, the member of the beach club who sponsored the weekend. This means she used my name to get into my beach club to plan an event for people she met less than 48 hours earlier. Yet she wants us to believe it slipped her mind to tell me? And it slipped her mind to tell Dolores who has known Teresa and her mother since she was 16 years old? The memorial was not spontaneous. Its planning was premeditated and calculated.

When Margaret was asked why she excluded Dolores and me from the memorial, she said she had no intention of excluding us, but the ceremony was for Teresa and Melissa, not Siggy and Dolores. Classic Margaret, she doesn’t apologize, she justifies.

Margaret’s way of opening a dialogue to slam me with the only person in the group who wasn’t mocking my disappointment. If it was out of concern, Margaret would have shown some level of empathy for my feelings. Instead, Margaret’s response was to spew a prepared list of complaints about me that she felt required me to apologize. When Dolores made it clear that she wasn’t susceptible to Margaret’s “fake it till you make it” brand of concern, Margaret resorted to labeling Dolores a mini Siggy. After all, how could anyone not agree with Margaret’s speed-date assessment of my character. It’s amazing how Margaret, the self-proclaimed feminist, can be so judgmental towards people she’s known for less than 48 hours.

Most amusing was when Margaret clearly misrepresents what Dolores said to her when reporting back. Margaret tells Teresa and Melissa that Dolores said, “That’s just Siggy. You have to accept her.” Classic Margaret, throw fuel on the fire, even when the entire mountain is already burning.

The trip went to hell in a hand basket when the ladies arrived at my home for dinner. Melissa walked into my home, pointed to a wall of my photographs and declared them “all my personalities.'” Margaret chimed in to declare them to be a “shrine to Siggy.” In reality, the photos are from a shoot that my husband lovingly presented to me as a gift.”

Siggy then turned her attention to both Danielle and Melissa.

“You could feel the tension. The truth is that the conflict stopped being about the flying birthday cake as soon as my “friends” saw how upset I was and completely disregarded my feelings. Whether they felt like my reaction was valid or not, they should care that their friend was distraught. They don’t have to be sorry about destroying a cake in order to be sorry that I’m sad and crying as I am scraping what’s left of the cake off the restaurant floor.

So as they arrived for dinner, I needed to discuss it and clear the air. Each took their shots. Melissa was holding onto her belief that she was just having fun. Classic Margaret couldn’t wait to mock my sensitivity, call me Soggy and minimize my feelings. Teresa identified insults that she claims I made. I was so upset and babala (drunk) that I didn’t remember some of what Teresa was attributing to me.

Melissa listed words that I must eliminate from my vocabulary immediately. According to Melissa, I can’t say “you’re acting like trash.” I guess Melissa referencing multiple personalities or drug use is OK to say. I must remember that “you’re garbage” is ok but “acting like trash” is not allowed.

Then the woman who froths at the mouth anytime she can spin the conversation into sex started screaming at me in my home, “Don’t f—ing use that word in my presence again!” I’m sorry, come again? I never got the memo of what I can and cannot say in front of Danielle who I was just getting to know for the first time. Don’t you know when you try to shush me, I get louder? See what I did there?

It was upsetting to hear Teresa say Dolores should have backed her when I couldn’t remember saying things at the flying cake party. Really? You joined a woman you just met against me and your decades long friend. Do you realize if you had said hey guys they’re my friends, this would have stopped on your ride to my beach club.”

TELL US – DO YOU THINK SIGGY OVERREACTED TO CAKEGATE? OR DOES SHE HAVE A RIGHT TO BE UPSET?