Did Bravo Fire Vicki Gunvalson from the Real Housewives of Orange County? 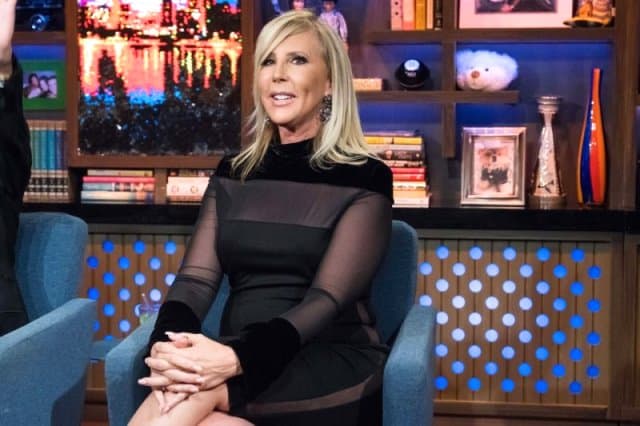 Has Bravo fired Vicki Gunvalson from the Real Housewives of Orange County?

According to a new report and the rumor mill, Vicki is at the very least being demoted from being a full-time housewife to simply a ‘Friend of the Housewives’.

Last week, it was reported that during the taping of Vicki’s appearance on Watch What Happens Live, she threw a hissy fit backstage! See WWHL host Andy Cohen is currently on tour with Anderson Cooper so most of his recent WWHL episodes have been taped in advance including Vicki’s latest Monday night appearance.

So why did Vicki, 55, throw a tantrum backstage? Apparently she was pissed that she was sitting far from Andy while the other guest, uber famous actress Rita Wilson, was seating closer to Andy.

The GoodTeaTime blog reports that thanks to Vicki throwing a tantrum behind the scenes and too much ongoing drama with her castmates, aka Tamra Judge and Shannon Beador who don’t want to film with her, the Bravo network is demoting her to a ‘Friend of the Housewives’ next season.

There are however rumors and rumblings out there that Bravo has already informed Vicki that she will be losing her position as a full-time cast member hence the reason she threw a tantrum on the set of WWHL.

This isn’t the first time Bravo has been unhappy with Vicki as the network had to delete her Bravo blog some weeks ago after she went into details about the gay rumors surrounding Tamra’s husband Eddie Judge.

The timing of this news is also interesting as Patch, a local OC media outlet, reported on Oct. 5 that Bravo had began casting for new OC housewives for season 13.

“If you or someone you know is an ongoing, strong, self-confident, stylish woman who resides in Orange County (preferably the coastal cities), please email [email protected],” the press release said.

It’s a very full cast as it is so it’s more than likely they are looking to let one or more people go if they end up casting new housewives.

TELL US – DO YOU BELIEVE BRAVO FIRED VICKI? DO YOU WANT HER GONE?