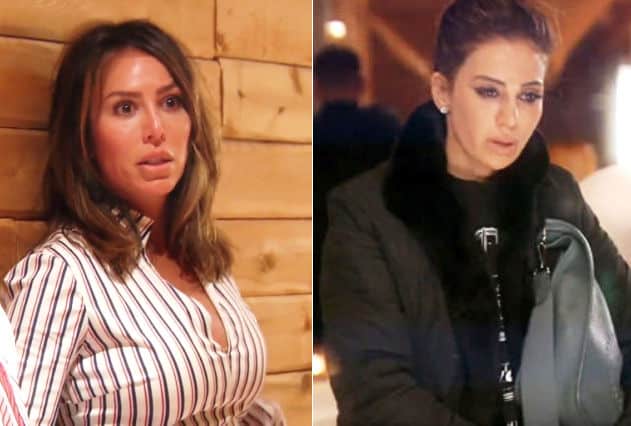 Real Housewives of Orange County star Kelly Dodd has never been one to mince her words so it’s no surprise that she is taking on castmate Peggy Sulahian in her latest blog!

Kelly doesn’t hold back as she feels Peggy loves to play victim and slams her for having a “limited vocabulary” .  She takes issue with Peggy giving her marital advice on the latest episode of the show as she feels Peggy is “subservient” to her husband Diko Sulahian. When it comes to Vicki Gunvalson’s health crisis, Kelly reveals she suspected it was an anxiety attack from the start which is why she felt no urgency to go see Vicki at the hospital.

Kelly also shares that there are only two episodes left until the reunion.

Below are excerpts from Kelly’s Bravo blog –

“I knew right away that Vicki was having an anxiety attack. She was exhausted, and I think she was scared to go to dinner, because sometimes going to those dinners can be like entering the lion’s den. I like Peggy. I think she’s a good person, and I know that her intentions are good, but she really gets on my nerves. I have a “hot” button, and that button gets pushed when somebody tries to tell me what to do. That is what Peggy does to me over, and over, and over again. I finally lost my patience with her.

You can clearly see that everyone was worried about Vicki and wanted her to be okay. I do think it became a bit like “too many cooks in the kitchen” (I trust that Diko will translate that for Peggy, due to her limited vocabulary.). If I was worried about anything, it was actually that all of us would give Vicki even more anxiety and make her condition worse. Once again, Fridrik was really on top of everything.

I have to say, Vicki Gunvalson may not be Michael Jackson, but when they wheeled her out and carried her down the stairs with that white robe over her head, she looked straight-up iconic.

Even still, I couldn’t believe Peggy couldn’t wait two seconds for me to pay my bill at the restaurant. How ridiculous! I do find it funny that once she arrived, Vicki was already discharged and they had to come right back. Karma!

I just love how Peggy said that she respects her husband and that I should take notes from her. I am glad that she is in a great relationship. I guess shutting up and being subservient is the recipe for a solid marriage!

When we took the party to Shannon’s room, it was supposed to be a fun resolution between the ladies, but we became terribly drunk. My patience with Peggy was gone by the time she said she was going to have her husband call my husband. It took me over the edge because she said it like it was some kind of threat! I feel like Peggy has a way of threatening people she disagrees with, and it’s very disturbing. When I said I was going to have my dad beat up her dad, first of all, I wasn’t saying it literally — I was showing Peggy how she sounds. Secondly, it was a euphemism! Communicating with someone who only takes phrases and expressions literally is a challenge. I was not even thinking of the fact that Peggy’s father had passed away, because it’s a figure of speech. I’m sorry if it triggered something sensitive for her.

It was genuinely sweet to see Vicki and Tamra hug it out, and I loved seeing them laughing together the next morning. When Vicki said life is about having fun, it really hit home. Isn’t that supposed to be what life is all about? For Peggy not to answer her door is immature. When I was in a similar circumstance in Ireland, no one came knocking at my door — not even Vicki! I’m over Peggy acting like such a victim. She never owns her mistakes or her words, and she’s trying to make us out to be mean girls. We’re just trying to laugh and have a good time. I’m glad I was able to make Tamra laugh that hard, even if Peggy chose to take it the wrong way. Peggy’s victim complex came through loud and clear when she said that night was one of the worst experiences of her entire life. Wow, she must have a pretty sheltered existence! Like I said last week, it’s good for everyone to get out of their bubble once in a while.

Once again, I’ve got to hand it to Lydia, not just for organizing this trip but also for being on it with Vicki and the hospital situation. I think her quest to convince Shannon to forgive Vicki might be too ambitious, though, even for her. If she can get Shannon to let go of that grudge, she should be given a medal for diplomacy! I guess we’ll see how this bridge between Vicki and Tamra and Shannon holds in the coming episodes…only two left until the reunion!”

TELL US – THOUGHTS ON KELLY’S COMMENTS? DO YOU AGREE?