Real Housewives of Atlanta Recap: Gettin’ Down in Atlanta 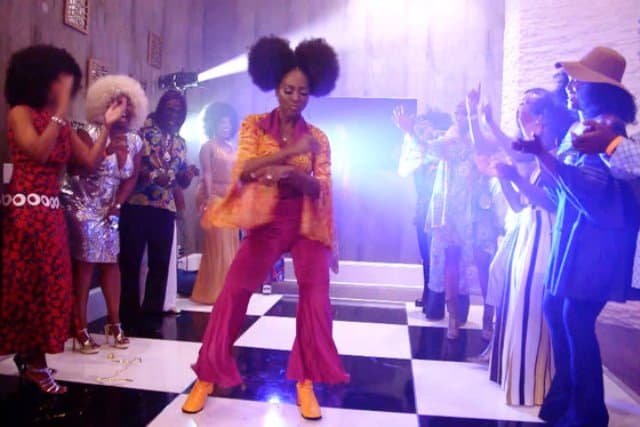 The ladies of the Real Housewives of Atlanta are a mixed bag. Sometimes it’s difficult to imagine how these women could be friends. There’s no middle ground. A few are relatively normal, but also a bit boring. The rest are completely out of their minds. But let’s face it: the crazy is what keeps us watching.

Now, I’m no psychologist, but I believe that both Kenya and Porsha suffer from delusions.

For starters, Kenya appears to be married to a man that exists only in her imagination. She speaks glowingly and passionately about him, but continues to refer to him only as “Baby”.  She refuses to tell the others his name, although if you paid close enough attention, she did let it slip. His name is Marc Daly, which doesn’t sound made up at all!All joking aside, her marriage is probably genuine but Kenya just seems to be trying too hard to prove to the others that this union is real. She called him on last night’s episode, to tell him the dog peed on her wedding dress and to say I love you, but of course he didn’t answer. Instead we were treated to Kenya leaving lengthy voicemails that kept getting cut off before she finished. She just kept calling back. If you didn’t already know, men LOVE that.

A little later, when Cynthia and NeNe come to Kenya’s house to pregame before Sheree’s party, NeNe boldly walks into Kenya’s closet, and comments on how the space that should be occupied by Kenya’s husband’s belongings is pretty sparse. It’s just a dozen, or so shirts and pants, all with the tags still on.

Now, SURELY Kenya didn’t go out and buy some men’s clothes and hang them in the closet just to make it look as though this man actually exists?! Of course not! That would be crazy! She had a perfectly reasonable explanation. She and her “husband” are “transitioning” and he “lives in New York”.

Porsha is still on shakey ground with some of the ladies, and as she said last week, she’s done with friends, and prefers to spend time with family, particularly her mother and sister/roommate/assistant Lauren.

The three ladies hit a spa together for seaweed wraps, meant to absorb fat and excess water. While there, Porsha proudly..and inaccurately…proclaims that she has a 24 inch waist (see? Delusional). She was politely corrected (Subtly shaded) when the technician informed her that one of her THIGHS measured more than 24 inches.

Porsha’s also interested in opening a salon. While meeting with her sister, and two consultants, Porsha is asked what exactly will set her set her salon apart from the many others in Atlanta. Her only response? “It’s my salon. That’s what will set it apart”. Her consultants seemed doubtful that this would be enough. Owning  a business is hard.

Lauren points this out to Porsha, and they begin discussing the workload, which according to Lauren, will be heaped upon her, while Porsha sits back and collects 85% of the profits. Porsha explains that this is as it should be, because Lauren hasn’t put in a “mother fu**in’ dime”!

As expected this remark was not well received, and Lauren continued to argue that she’d be doing most of the work, and getting paid “like a little sister”, rather than a valued employee. Porsha suggests that she “don’t do it no more, then”, to which Lauren responds that she won’t, and that she’ll now be “on the streets” with her baby, and storms out of the cafe! Poor delusional, thick waisted Porsha! She just can’t make it work with anybody.

Cynthia, on the other hand, IS making it work in the dating world. We saw her with a more age appropriate date in last night’s episode. Will Jones is 41, has never been married, has a daughter, and doesn’t bring his phone on dates. Sounds perfect, right?! Well, yeah! He’s the male version of Cynthia, and as she states, without a trace of irony, “I love me some me!” (Sigh)

Kandi is another story. She’s got nothing going on. Or maybe she has so much going on that she doesn’t have time for drama. That’s nice…but this is reality tv! You’ve got to give us more than just five minutes of you gossiping about the others with your husband and business associates.

Now, Sheree knows the rules. And damn it, she will bring drama, even if she has to invent it out of thin air. Last night, we saw her arguing with with yet another party planner. We all remember the “who gonna check me, boo” episode, right? No party planner is safe around Sheree! She nearly came to blows with a six foot tall man over a billing dispute. Surely she’d snap poor Tiffany the Party Planner like a twig.

But Tiffany the Party Planner is no fool. Before she could feel the full wrath of a disgruntled Sheree, she quit the job by text. This, of course, incensed Sheree. She yelled, she left threatening voicemails, and finally, threw her microphone on the ground, and stomped off. THAT’S a reality tv star, people!

In the end, though, the party went off without a hitch. It was in honor of Sheree’s mother’s 70th birthday, and had a 70’s theme. All of the ladies came out to celebrate. They got along. They wore the requisite Afro wigs. They made duck lips while they danced in a Soul Train line, seriously testing the seams of their skin tight, poly-blend bell bottoms. It was sweet, really.

The comic relief and good will would not last, however. NeNe’s husband, Greg, was hospitalized with heart issues. NeNe was pretty low key about it, at first, and seemed pretty sure that Greg would be fine. But when he called to say that they had moved up the procedure he was going to have, and sounded scared and lonely, NeNe really started to worry, and rushed to be by his side.

So, all in all, this week’s episode gave us plenty of the crazy we love, and it looks like it’s only going to ramp up from here. Kim Zolciak will be back next week, and she and Kenya are about to pick up right where they left off!

TELL US – WHAT ARE YOUR THOUGHTS ON THE RECAP AND LATEST RHOA EPISODE?