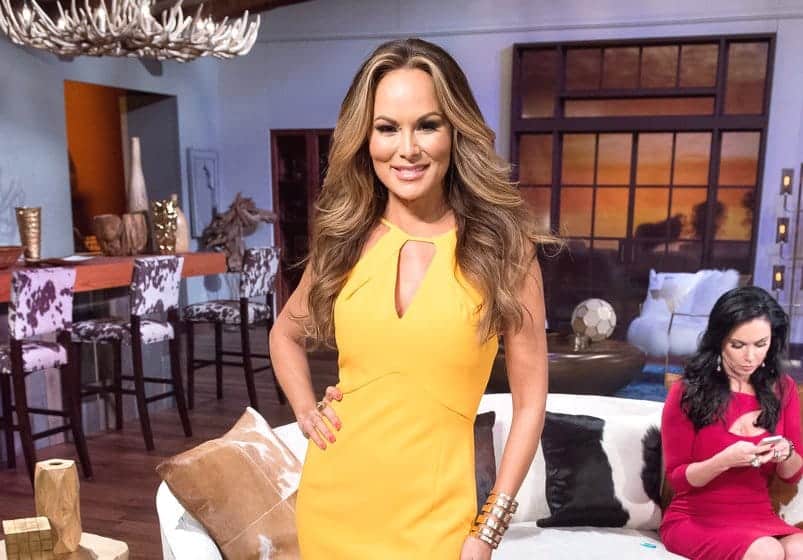 In a rant she posted online this week, Tiffany, who was a full time housewife on the first season of the RHOD, warns others not to join the Housewives series stating that Bravo exploits and destroys women for ratings. Wowzers.

First Tiffany slams Andy and Bravo, saying Andy is laughing all the way to the bank while Bravo ruins the lives of the Housewives –

“I’m getting texts and seeing FB posts that Bravo casting is looking for new women for Season 3 of RHOD. Hear me, ladies. If you just want to be famous and willing to jeopardize your marriage, family and brand/mission – go for it.  Bravo is a bottom feeder. People worship Andy Cohen. HA! He’s laughing at these women as he’s purchasing his next piece of NY real estate. Be mindful of who you worship!!! They are about exploitation and look for any crack to destroy you, your husband and your marriage for high ratings. ( I think most of the NY housewives have gotten divorced!) They will dig up ANYthing to use against you. It’s just fact! You are paid to fight. Period. Beautiful, affluent women fighting is just about the ugliest thing to witness. I can’t, I won’t be quiet about this. Bravo uses you and laughs at you … all the way to the bank. It’s just gross.”

“I applaud D’Andra Simmons for actually staying true to herself, her beliefs and brand in Season 2. Are YOU that strong? I bear the HENDRA name. I will not dishonor it or God. I wish this franchise would go to hell and die, once and for all. We need programming that celebrates strong female unity. Period. If you get sucked in and celebrate watching other women in turmoil and drama, then you need to go get a life. Seriously.” 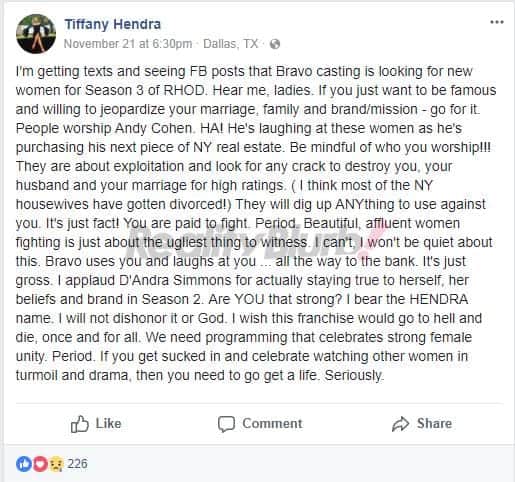 One of Tiffany’s fans then asked a fair question on why she chose to appear on the recent second season if she truly felt this way. As despite being reportedly let go by Bravo after season one, Tiffany, who is one of LeeAnne Locken’s best friends, made a few appearances on season two.

Well according to Tiffany, she only appeared to support LeeAnne and Brandi Redmond at their events.

She wrote, “The ONLY reason I made appearances on season 2 was to genuinely support LeeAnne and Brandi at their parties. Brandi’s holiday party was suppose to to launch her clothing line and i wanted to show my support.. And LeeAnne asked me to please attend Steph’s Halloween party with her as support.. that’s why i wore a wig. Didn’t care to be recognized.”

Tiffany also accused Bravo of only promoting negativity citing they cut out a lot of positive things she and other RHOD cast members filmed for season two. She gave an example of this by revealing that a scene of her husband, Aaron Hendra, and LeeAnne’s fiance, Rich Emberlin, singing to LeeAnne at her engagement party was cut with the network instead choosing to focus on drama and fighting.

All interesting. Would love to hear your opinions on this…

TELL US – DOES TIFFANY HAVE A VALID POINT? OR DO YOU CONSIDER THIS SOUR GRAPES?