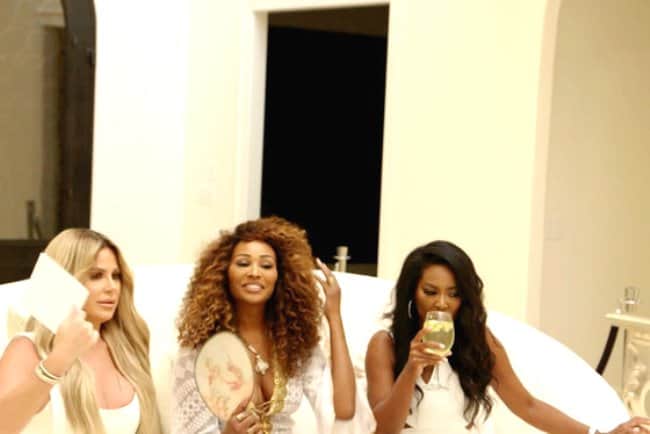 Well, the ladies of the Real Housewives of Atlanta FINALLY brought some real drama last night, albeit in the last five minutes of the show.

But the momentum is building. And in the spirit of the holiday season, it came compliments of a few ghosts of Housewives past…

It all started when NeNe, relieved to have her husband out of the hospital, decided to throw a party.

The theme was to be: “The All White Never Forget Party”, which also included some footnote about the “girls bringing their gays”, which no one quite understood, but everyone agreed was vaguely homophobic.

There was also some confusion among the ladies as to what, exactly, it was they should “never forget”. When NeNe was asked by her party planner what it meant, she responded “that they’ve been here (NeNe’s House) before”.

What?! Apparently, this was about Porsha, and how she somehow acted as if she hadn’t been to NeNe’s house before.

Anyway, does it really matter? What’s a little homophobia and a shady, indecipherable invitation when it gives these southern belles the opportunity to teeter around in all white outfits, and drink out of red solo cups whilst knifing each other in the back?!

Before the party even started, Marlo made her dramatic reappearance, showing up (seemingly unannounced and uninvited) to NeNe’s house, wearing a long silk robe, opened to reveal several thick, gold chains, and some sort of lace bustier, and fluffy slippers.

NeNe seemed happy to see her former friend, but left no doubt that she was still had reservations because of the relationship Marlo had with Kenya.

This is somewhat odd, considering that, at least for the moment, NeNe and Kenya are on good terms. But it’s fairly typical for NeNe to want defined alliances.

Speaking of Kenya, the ladies still haven’t met her new “husband”, and everyone is talking about it, including Kim Zolciak.  Yes, Kim is back too! And Sheree invited her to be her plus one to NeNe’s odd little gathering.

Sheree did not inform NeNe of her plans to bring Kim, who was a little nervous about how her presence would be received. It seems Kim and NeNe hadn’t spoken in quite some time, and when they saw each other at a mall, didn’t bother crossing the parking lot to speak to one another.

Sheree assured her that it would be fine since it followed the theme of the evening. Apparently the ladies will “never forget” that Kim was once romantically involved with a woman, which makes her Sheree’s “favorite gay”. (I know)

You’ve really gotta love Sheree for this type of thing! She’s never actually directly involved in the drama, but can always be counted on to casually drop a bomb, and sit back and watch the shrapnel fly.

Before they even got to the party, Kim and Sheree were already talking about Kenya’s marriage. Both seemed skeptical, and Kim said that she heard the guy was “a fan” of the show.

When Kim did arrive, NeNe seemed pleasantly surprised. They hugged, called each other bitches…it was like old times. Lisa Wu (seasons 1-3) even made an appearance.

The only one who didn’t seem happy to have Kim back in the fold was Kenya. The last time that saw each other it wasn’t pretty. The two had argued at Sheree’s housewarming about Kenya walking through restricted parts of the house, and, of course, making nitpicky comments about Chateau Sheree. The whole thing devolved into quite the screaming match.

Nevertheless, NeNe suggests that they all go inside, so they could catch up. That sounds nice doesn’t it?  I mean, these ladies have known each other for years. They’re all adults, mothers even. They SHOULD settle in for some girl talk, right?

NO! They most certainly shouldn’t have. It got real ugly, real fast. Up until that point, Kenya and Kim had been ignoring each other. But once they all say down, talk immediately turned to Kenya’s marriage.

Marlo congratulated Kenya, and asked when she might get to meet her new husband. The others chimed in to say that they hadn’t met him either. Kenya said she hoped it would happen soon.

Kim cut Kenya off mid-gush, and told the rest of the ladies “it ain’t never gonna happen, cause he doesn’t f***ing exist”!  Yes, she went directly there! The others seemed shocked at her boldness, but were clearly also elated to finally be addressing the elephant in the room, and were practically salivating in anticipation of Kenya’s response.

Well, respond she did! “Why do you have such a hard on for me?” she asked Kim. “I thought you had it cut off during your reassignment surgery”! (Transphobia too. At least they’re versatile) Kim tells her it’s because she thinks Kenya is “up to something”.

OUCH! This was, of course, a reference to a tweet that Kim sent to Legend’s wife, Chrissy Tiegen earlier this year. In it, she asked who her daughter, Brielle “had to blow, in order to meet him” (apparently Kim has never heard of TicketMaster)!

Now, the offer was followed by an all caps “LOL”, and, of course, John Legend and his wife declined, so it was only theoretical pimping out. But still, not a good look for any mother.  As you can imagine, this last statement was not well received, and Kim ended up lunging at Kenya, and it doesn’t look as though things are going to get straightened out anytime soon.

Absent from these festivities were Kandi and Porsha. Kandi because she was in New York shooting her “Essence Magazine” cover. And Porsha because she wasn’t invited.

Porsha and NeNe are are still on bad terms, after she accused NeNe of trying to get her fired from the show. Porsha texted NeNe to schedule a sit down to discuss their issues, but NeNe wasn’t interested.

She said Porsha was on her “I don’t five a f***” list. NeNe also brought up last season’s scandal involving Porsha being told (falsely) that Kandi, and her husband, Todd had plotted to drug and rape her.  NeNe apparently believes that Porsha knew all along that these allegations were false, but ran with them anyway. And that when things got hot at the reunion, and Porsha was truly confronted, she played dumb and threw Phaedra under the bus.

For her part, Porsha said she didn’t care to go to NeNe’s party anyway. In fact, she said she rather “pluck out” all of her own toenails, “put them in a glass of Hennessy, and drink it down like a shot” than attend.

Instead, Porsha spent her time mending fences with her sister, Lauren, who made good on her threat to move out of Porsha’s home after their fight last week.

So, it looks like the ladies are on pretty shaky ground with some of their friendships. And we’re STILL left with unanswered questions about Kenya’s marriage. Perhaps Kim will get the truth out of her next week?

Sheree is also planning a trip for all the ladies to San Francisco. If you’ve watched the last few seasons, you may have noticed things always get out of control when these ladies get out of their comfort zone.

So stay tuned! But if you miss it, I’ll be watching and reporting back on all the juiciest tidbits next week.

TELL US – WHAT ARE YOUR THOUGHTS ON THE RECAP AND LATEST EPISODE OF RHOA?