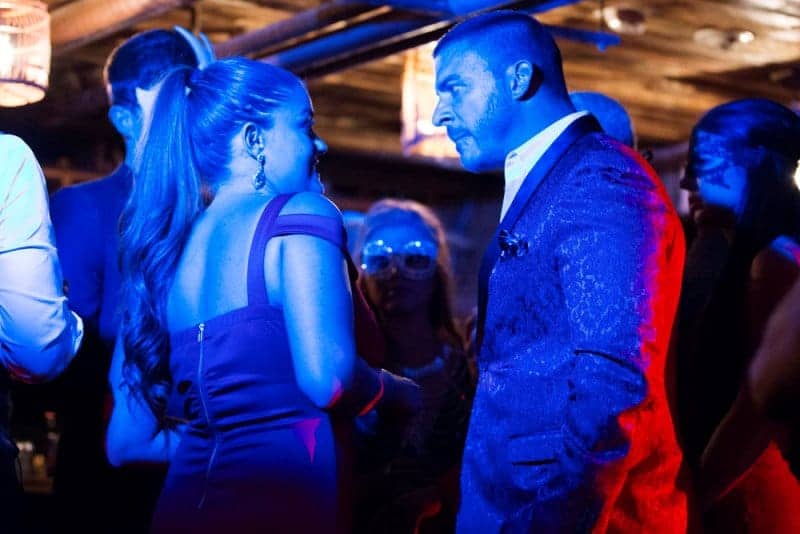 They’re baaaaaaaack! Everyone’s favorite guilty-pleasure, the drunken crew of Vanderpump Rules is here for a brand new season, promising to be the craziest one yet!

What better way to kick off this season than with a birthday masquerade? Even better, SCHEANA’S birthday masquerade?! The quick teaser at the start of the episode was enough to get me choosing sides and hating on Jax because it is just a natural reaction.

Before the birthday drama unravels, we viewers are graced with the dinner scene at SUR served by, you guessed it, the world’s most loved and hated waitresses and bartenders. Catching up with them is like a quick flip through your high school yearbook- you want to look, but you also know that it may not be pretty.

For instance, there’s Scheana, introducing herself to the guests at the table she is serving. Like, seriously Scheana? You don’t think these people don’t know who you are? Hell, they probably only came to the restaurant BECAUSE you would be there, but don’t tell that to LVP, the founding momma of the restaurant. Anyway, Scheana is essentially whittling away to nothing and has gotten herself a new man named Rob just 6 months after telling Shay that she wanted a divorce. Hmmm….

Then there’s Brittany and Jax. Jax proudly shares with Lisa that he is celebrating two years with Brittany this year. He evidently feels as though he should deserve an award for this feat, yet LVP isn’t as into him as she is into the two Toms, Sandoval and Schwartzie. The concept of Tom-Tom, the restaurant Lisa introduced to Tom2, is still out on the table. Of course Sandoval is as intense as ever and claims that he would be able to make the $100,000 investment to be considered a partner in this venture. I doubt he would be able to stop himself from purchasing his expensive hair products and save for this ordeal, but I digress. Speaking of hair products, let’s discuss Ariana’s fresh new cut. She looks adorable and she says Tom has told her he “has already masturbated to her hair.” Um, excuse me, what?!

Meanwhile, Katie and Stassi are back on the “we don’t like Scheana” kick and Scheana decides to straight up tell Katie she is not invited to her birthday party. Katie obviously doesn’t care, cuz Katie is dead inside, and instead states she has already “mourned the loss of Scheana” and that she wouldn’t want to go to the “birthday masquerade slash her and Rob’s coming out party.” Take that.

After the shift of hardly working and just looking good behind the bar, Tom and Ariana sit down and have an end of shift chat about the potential future of Tom-Tom. Ariana cheers her man on and reminds him that he knows what he is doing. In fact, Tom even went on a “research trip” to work pot into the Tom-Tom menu. Hey, Tom, nice try. The only way LVP would allow for that is if the marijuana was pink.

Tom, amped up and frustrated that Lisa may not listen to all of his far-fetched ideas, begins getting loud…loud enough that it catches the attention of Ken and Lisa over at table 7. Tom does that oh snap face and wants to crawl under a rock and die since he basically bashed the hand that was feeding him.

Over at Stassi’s apartment, we find out that she is back with Patrick, again. Even Katie, there to help Stassi install her AC unit, shot a side eye over at Stassi upon hearing this news. The two of them discuss relationships whilst sipping on strawberry margaritas. Katie explains how much she loooves married life and also lets Stassi in on what went down at SUR regarding Scheana’s birthday. I think I actually saw Stassi’s claws come out.

James, the resident bad-boy DJ, has a new best “friend” this season named Logan. Logan likes men and therefore brings no competition to the table. However, Logan apparently makes some good cookies and James just “thanks GOD” he has Logan “while Racquel is gone.” Anyone else’s eyebrows raised during this segment? I find their relationship increasingly weird once Racquel, James’s girlfriend, arrives back from college. James straight up dismisses Logan and you can see, if you look really closely, a small tear trickle down Logan’s cheek while he silently mouths “WTF.” Ah, to be used…

At the Tom-Tom site, Sandoval is running around spitting out ideas like a man who just chugged 43 Red Bulls. He wants a vibe of “comfortability, familiarity, and heart,” which could be a problem because only two of those three things are REAL WORDS. Schwartz just stares and blinks dumbly as Sandoval explains how he may have ruined the Tom-Tom chance because of his big mouth. Anddddd it doesn’t take long for Lisa to let Tom know that she heard everything. #awkward. Way to go, Sandoval. You may have just jeopardized the whole thing for you and Tom. And Schwartz has admitted he is “scared” of his wife, Katie. Don’t make him have to explain this to her…

On the night of Scheana’s party, Katie and Stassi head out with their husband Schwartzie. Stassi third-wheels so hard it just seems like a strange polygamist relationship. The girls bash the other girls cuz that’s what these girls do, and Schwartz kisses them goodbye and heads over to the party. Meanwhile, as Tom Sandoval and Ariana prep for the night’s event, Sandoval shares the juiciest gossip to date: he heard that Jax slept with Faith, another waitress. It takes but a minute for this rumor to spread like wild fire at the party and suddenly Jax finds himself in the center of a big, fat mess.

Faith lets James in on the dirt: “it all just happened so fast.” Faith works with elder care and Jax went over to see Faith. There, Jax proclaimed that he wanted Faith bad, so bad that he proceeded to SUCK HER TOES, while the old woman Faith took care of slept soundly in the bed nearby. The two then had sex, sans condom and now……..wait for it………Faith has not gotten her period. OH BABY. (Sidenote: you know LVP would throw her a kick ass baby shower! Too soon?) The world needs NO MORE Jax Taylors.

Around and around the tale gets spun until it eventually gets whispered into poor Brittany’s ear. “Jax slept with Faith.” Somehow the part that he may be fathering a child got left out of the mix. Oh dear. Jax decides to take the situation into his own hands and confronts Faith. His eyes are PLEADING with Faith when he asks to squelch the “rumor.” He stares, burning his eyes into Faith’s soul, but Faith doesn’t break. I would say I can’t believe this is happening….but sadly, I can.

Scheana has NO idea this is occurring at her party because she is too enrapt in her love with Rob; however, everyone else, I mean EVERYONE else, has heard. Brittany does not deserve this. The crew gathers outside to find out what really went down. Brittany threatens to take the dogs when she leaves Jax, but we all know Jax is the real dog here. Man, they weren’t kidding when they said this would be the craziest season yet. This incestual crew can’t help themselves-they gravitate toward the drama like a moth to a flame. And I love it.

TELL US – WHAT ARE YOUR THOUGHTS ON THE VANDERPUMP RULES RECAP AND SEASON PREMIERE?