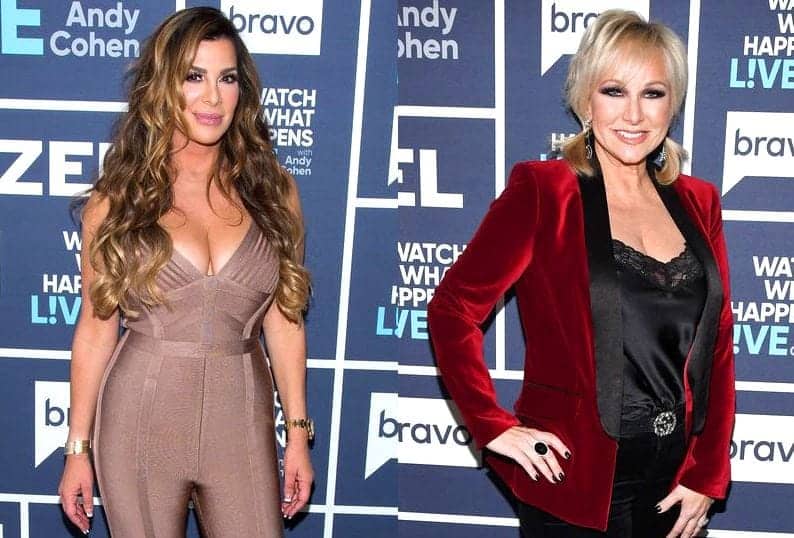 The latest is a new Twitter rant by Siggy that went on for four days during which she slammed Margaret by accusing her of attacking her marriage, health, and religion. It didn’t end there as she also called Margaret ‘sick, sad, and mentally unwell’ while stating her brain is fried! Yikes.

First Siggy took to her Twitter and wrote, “Pigtails & Pot Puss FRIED her brain! How in the world is it ok to mock my hubby, my medical problem, my career, my name, my son & then let HITLER roll off her tongue in a remark directed at the only Jewish girl at the dinner table discussing a charity event! I’M DONE! #RHONJ.”

Pigtails & Pot Puss FRIED her brain! How in the world is it ok to mock my hubby, my medical problem, my career, my name, my son & then let HITLER roll off her tongue in a remark directed at the only Jewish girl at the dinner table discussing a charity event! I'M DONE! #RHONJ pic.twitter.com/x79lFMZuve

Oh but it got worse as Siggy went on to call Margaret a “nut job”,  accused her of stealing, referenced her bankruptcy, plus her affair with her current husband.

Siggy tweeted, “Obviously. I have fulfilled dreams. She stole from other people and got caught. Now i know why she married the plumber. She is so full of s**t someone had to clean out those pipes! #RHONJ.”

She later added, “Only 1 nut job on #RHONJ – powerhouse in pot puss is up to her neck in debt & lawsuits because stealing other people’s ideas & claiming them as your own is an everyday thing for her just like HITLER rolls off her tongue so effortlessly when looking ar the only Jew! #RHONJ #F–KU.”

Siggy also accused Margaret of creating fake accounts to bully her online. Screenshots are below. 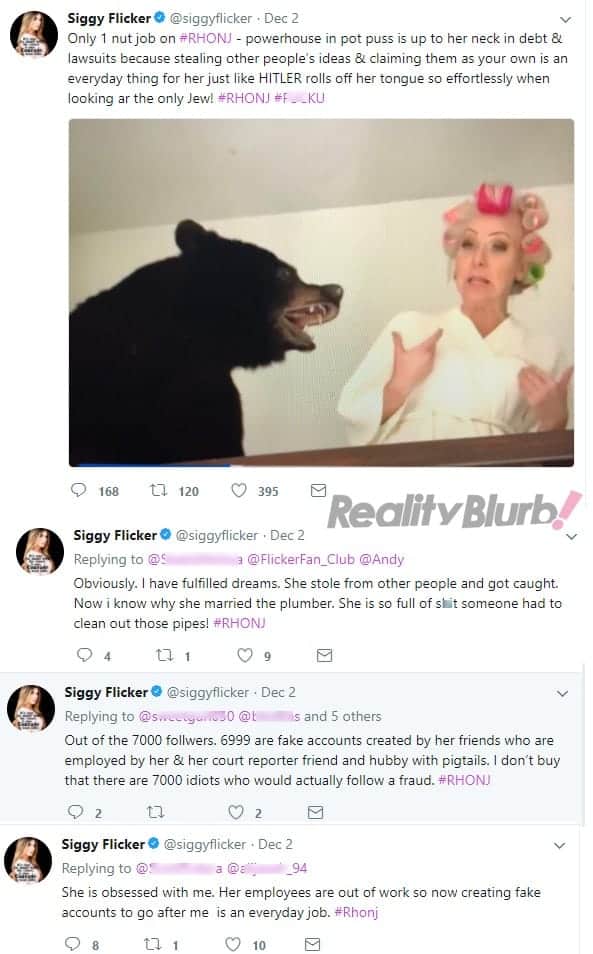 RHONJ fans started tweeting Siggy’s comments to Margaret who then responded by writing, “Unfortunately, she is mentally unwell. Nothing else seems to truly matter to her but me. It’s sad.”

Siggy responded to Margaret’s response by tweeting, “I truly believe in my heart that she is mentally unwell. very sick & sad woman who has not been successful in business or personal life. She is a very jealous woman! Stay Away! #RHONJ“.

A screenshot of that is below. 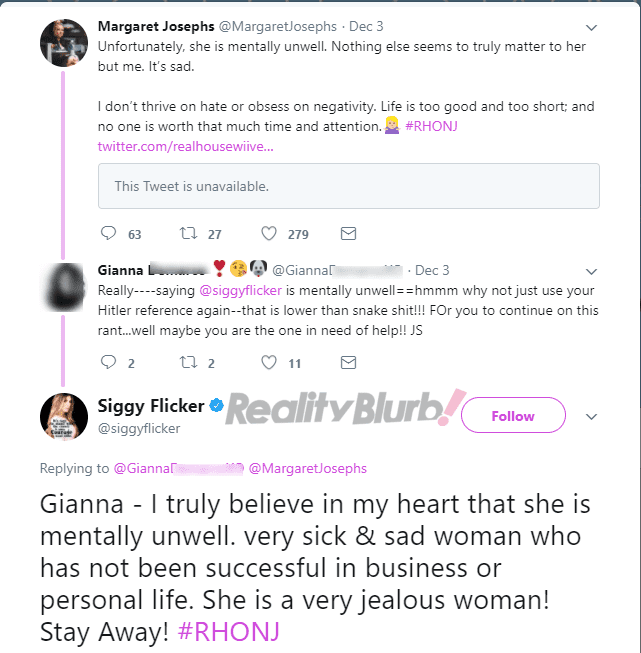 Finally Siggy also responded to questions about how long she has actually known Margaret as she has stated numerous times that she feels betrayed by Margaret after bringing her on the show. Apparently the two ladies do not know each other that well at all.

Siggy tweeted, “She is a friend of a friend so I welcomed her in. I don’t have history with her. Never went out with her for lunch, dinner or anything!”

Safe to say Siggy isn’t taking Andy Cohen’s advice to get off Twitter!

In the mean time, we can continue to watch this drama play out tonight on Bravo as the latest episode of the RHONJ airs at 9/8c.

TELL US – THOUGHTS ON SIGGY’S TWITTER RANT? AND MARGARET’S RESPONSE?