Real Housewives of Atlanta Recap: All Aboard the Shady Express 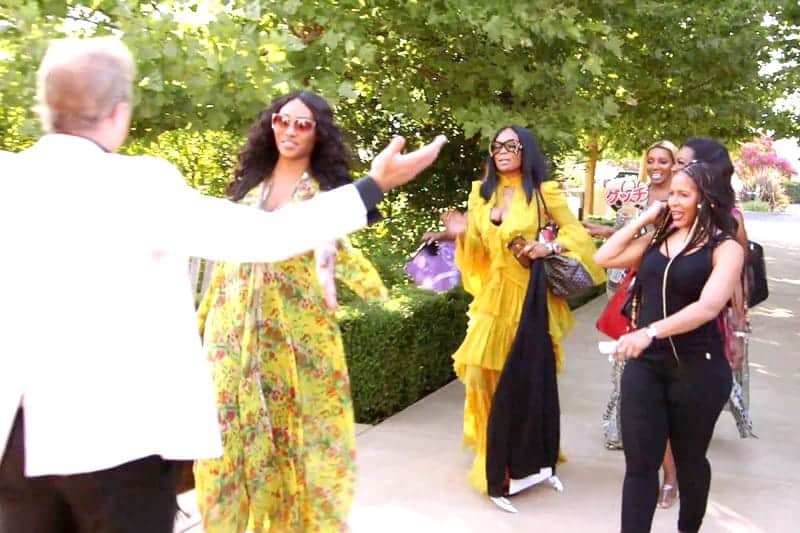 I must say that of all the Housewives, past and present, across all the franchises of the show, Real Housewives of Atlanta star Porsha Williams is my least favorite.

She’s never had a particularly juicy storyline, and her personality isn’t enough to carry her without it. I’m never quite sure why she’s still there. Don’t get me wrong, she’s certainly been the source of plenty of drama, but it usually just results in a lot of nonsensical yelling, and ultimately shrivels and dies on the vine, without really enticing the viewer.

And, really what’s to like? She’s neither clever, nor funny. She talks plenty of trash on her “friends”, has anger management issues, and is a bit of an airhead.

It’s clear the other ladies of  the Real Housewives of Atlanta feel the same way. Porsha’s inability to maintain her friendships has been a running theme throughout this season.

Porsha has had almost constant conflict with the other women from the very beginning. At worst, there were the physical altercations she had with both Kenya and Cynthia, at best the other ladies seem to merely tolerate her.

When we picked up with the ladies last night, they were still in San Francisco, and Porsha was at it again. This time it was a screaming match with NeNe.

Porsha accused NeNe of trying to get her fired from the show because of some comments NeNe made on “Watch What Happens Live”, where she said that Porsha’s behavior had “de-classed” the show.

To refresh you memories, last season, former cast member, Phaedra Parks convinced Porsha that Kandi and her husband, Todd were planning to drug and rape her. Porsha and Phaedra both spread this story like wildfire.

It was a preposterous and decidedly desperate story line.

First of all, Porsha had known Kandi and her husband for years at that point, so the idea that she would believe that they posed a true threat to her just didn’t ring true.

Secondly, even if Kandi and Todd were nefarious criminals, why on earth would Kandi announce her intentions to commit a double felony to Phaedra, who she not only wasn’t close to anymore, but  also happens to be an attorney?

Like I said, preposterous. In the end, Phaedra was fired from the show, and Porsha got to stay. This is the crux of NeNe’s problem with Porsha. NeNe insists that she did not try to get Porsha fired, and that in fact, she’s the reason Porsha is still on the show.

But NeNe also felt that Porsha was “playing” dumb , and that in reality, she knew exactly what she was doing, and how much it would hurt Kandi. But when it all came to a head, she left Phaedra twisting in the wind by herself, and plead ignorance to Kandi.

Kandi is, of course, still angry with Porsha, too. She’s a mother and a business woman. Allegations such as the ones that Porsha and Phaedra made could have had dire consequences. During their argument, NeNe was trying to explain this to Porsha, but it mostly fell on deaf ears. Although, in Porsha’s defense, the point may have been lost in all the screaming and cursing NeNe was doing.

Eventually, the other ladies decided that the argument had gone far enough, and Kenya and Cynthia dragged NeNe away from the table, and upstairs to her hotel room to talk, along with Marlo and Kandi. The ladies were pretty firmly on NeNe’s side. They all agreed that Porsha lacked accountability, was ungrateful for the support NeNe had given her, and was an overall bad friend.

Porsha was left with only Sheree to console her, and let’s face it…that’s not really Sheree’s strong suit. But to Sheree’s credit, she did encourage Porsha to share her feelings, which were mainly that she felt unfairly persecuted, and ganged up on by the other women. After all, NeNe has had her own issues with these women, so why should Porsha be the only one taken to task?

For her part, Kandi has mostly avoided having direct contact with Porsha all season, but with the ladies in Francisco, it’s been a little more difficult. And once NeNe brought up the situation during her argument with Porsha, it became nearly impossible.

The following morning, the ladies took off for a tour of he city. NeNe and Porsha seemed to come to an unspoken agreement to leave the argument behind them for the sake of the others, and to salvage what was left of the trip. Wisely, Sheree suggested that the ladies separate into two groups to do their sight seeing. Besides, how else could they talk about each other?

This left NeNe with Kandi, Kenya, and Cynthia, who were all curious about what NeNe knew about Sheree’s “prison bae”, Tyrone. NeNe was, of course, happy to oblige, telling the ladies that when she knew Tyrone, he had been a “con artist”, and had bilked a company out of over 4 million dollars!

On the other side of town, Porsha, Marlo, and Sheree had questions of their own. Specifically, just what is going on with Kenya and her “husband”?None of the women were invited to the ceremony, and they have all yet to meet this dream man—even Kenya’s close friend, Cynthia.

Now, to be fair, the guest list for the wedding appears to have been extremely exclusive. Kenya’s own father didn’t even make the cut. But what’s more suspicious to the ladies is that Kenya was reluctant to even tell the ladies her husband’s name, instead referring to him as “Baby” any time they asked.

Marlo suggested that the ladies throw an impromptu wedding celebration for Kenya. Why have they not given Marlo a peach?! This is expert level shade. She knows that most of the women  have their doubts, and rather than question it, outright, she decided to “do something nice”, and see what reaction it brought.

None of the women were quite sure how Kenya would react. Surely, she’d realize that this was just their way of letting her know that they know she’s a fraud, and that they know she knows they know it..or something. But anyway, a wedding. A celebration. What’s not to love?And Kenya was actually a pretty good sport.

She donned the veil, recited the vows, and even kissed the cardboard cutout (held up and voiced by Porsha) that the ladies had deemed the perfect stand-in for the real thing.

Porsha even took the opportunity to pull Kandi aside, and offer her a formal apology, and while it wasn’t exactly warmly received, the evening was lovely. I must admit I shed a tear.

The ladies continued to be (barely) cordial to one another for the remainder of the trip. Porsha attempted to make small talk with Kenya about her husband, and even feigned interest  long enough for it to seem almost genuine.

Kenya, in turn, offered Porsha some sage advice: she said that she needed to really listen to what NeNe and Kandi had to say, and that her actions were more important than her words when it came to getting back into Kand’s good graces.

Porsha gave the small talk a try with Kandi, too. It didn’t go well. Porsha told Kandi how excited she was to hear that she was reuniting with her musical group, Xscape, and that she’d love to see their show.  Kandi told her, “I won’t be inviting your a**”. Ouch! The ladies both laughed heartily at this, but it was clear that Kandi wasn’t joking. I’m pretty sure she’s done with Porsha for good.

After the customary trip to wine country, complete with grape stomping, Kenya left the trip early to attend her grandmother’s funeral. The ladies saw her off, hugging her goodbye, expressing condolences and love,  and waving as her car pulled away.

THEN they got down to the business of talking about her. They all agreed that Kenya’s situation was unorthodox, to say the least. Marlo asked the ladies to raise their hands if they thought the marriage was legitimate.

All but Kandi left their hands down. Cynthia refused to play along, or to hear a bad word about her friend, and left the table near tears. After NeNe calmed Cynthia down, and she returned to the table, however, she had to agree that the situation was odd.

Cynthia also said that she was more hurt by Kenya than she was angry at them. She felt that Kenya was a close friend. But can you really call someone a close friend if they’re keeping a huge part of their life from you? No, you can not.

In the end the Cynthia agreed to revisit this issue with Kenya once they all returned to Atlanta. So it looks like Kenya may be running out of time to produce this “husband” of hers. Stay tuned!

TELL US – WHAT ARE YOUR THOUGHTS ON THIS RHOA RECAP AND THE LATEST EPISODE?